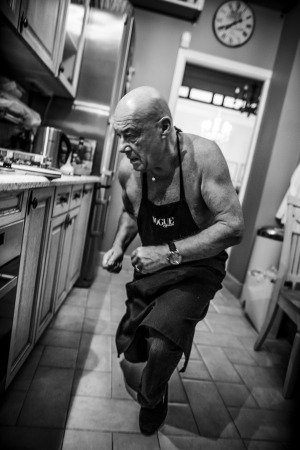 Project “The Big Portrait” and Moscow Museum of Modern Art present Igor Ganzha's photo exhibition. The show will contain photos of Vladimir Pozner taken by Igor Ganzha. One of the best Russian portrait photographers took pictures of one of the best Russian jornalists. There appeared a wonderful project. On the one hand, it reveals the real Pozner, whose personality is deeper and more complex than his television persona. On the other hand, we can enjoy the example of the delicate and profound psychological research through photography. And at last, it is an incredibly powerful and vivid artistic message.

“At first, I objected, opposed, feeling embarrassed…, but my friends persuaded me to take part. And I didn’t regret, since when I looked at the brilliant photos by Igor Ganzha, I suddenly saw myself in a different way. In some respects, I revealed myself to myself. But it’s worth it”, Vladimir Pozner said.

“It’s important to realize that Vladimir Pozner has been efficiently engaged in his professional image-making longer than most of the exhibition visitors have lived. Thus, to consider the onscreen Pozner to be a genuine person is the same as to believe Anthony Hopkins to be a real Doctor Lecter. But even people, who are less professional and less popular than Vladimir Pozner, wear masks adhered to their faces. That’s why, I am very grateful to him for his easy, open and sincere communication with the camera. It’s a sign of the incredible inner freedom and the genuine depth of the character”, Igor Ganzha said.

During the exhibition opening in the MMOMA main premises at 25 Petrovka Street, there will be organized a presentation of the book of the same title. Some photos from the edition will be shown at the exhibition.

The edition “Pozner. The Big Portrait” by Igor Ganzha is the third book in the series. Two first editions were published titled “The Photos of Outstanding People”. But the series concept has changed much. Elena Reznik, the author of the idea and the project producer, said about the project as follows, “Something in the series remained unchanged. For example, it was the “one book-one hero” principle. But something changed radically, thus, we replaced “The Photos of Outstanding People” by “The Big Portrait” title. Two first editions about Oleg Tabakov and Alexander Vasiliev were remarkable, but they were no photo books. They more resembled a hardback special edition of the magazine focusing on a single hero. Photos, first of all, illustrated the text. Each hero was photographed by several photographers, each having his own vision. Starting from the third edition, everything has changed fundamentally. The one hero - one photographer principle was added. Moreover, the photo project by Igor Ganzha will become the first one of the Big Portrait project, which will be presented as an exhibition in the largest museum of contemporary art in Moscow”.

In January, in the MMOMA venue at 10 Gogolevsky boulevard, in collaboration with Avdotya Smirnova’s Foundation VYHOD, a charity auction will be held. Funds raised from the auction will go to help children with autism. The auction will be organized with support of Sotheby’s and will be conducted by Lord Poltimore who is Deputy Chairman of Sotheby's Europe. Lord Poltimore has been in the auction world for 30 years. As Chairman of Sotheby’s Russia, he travels regularly to Russia, and along with the international Russian Art department has helped develop a strong client base and prove that Russia has become an increasingly important and dominant international art centre.