A project by Miguel Angel Blanco

Natural Histories. 22 interventions that aim to fuse art and nature, located in the galleries of the Permanent Collection. Animal, vegetable and mineral objects selected by Blanco from Spanish natural history collections, establish a dialogue with the paintings and sculptures. 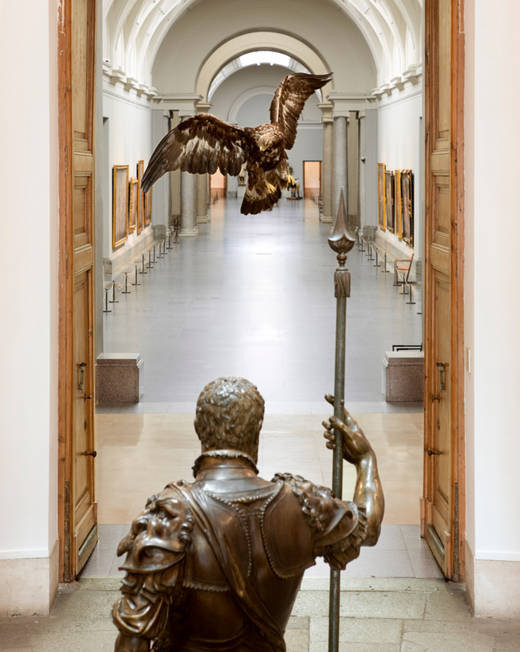 Through this exhibition, the Prado is paying tribute to its own history and to the origins of its building, originally designed as a Natural History museum.

On 19 November 1819, the Prado opened its doors to the public for the first time as the Museo Nacional de Pinturas y Esculturas (National Museum of Paintings and Sculptures). However, the Neo-classical building designed by Juan de Villanueva that now houses the Prado was originally designed as the Royal Natural History Cabinet on the orders of Charles III in 1785.

Natural Histories. A project by Miguel Ángel Blanco consists of twenty-two interventions in the Prado's galleries, made up of 150 objects from the natural world (minerals, stuffed or preserved animals, skeletons and insects), the majority from the Museo Nacional de Ciencias Naturales, shown alongside twenty-five works from the Museum's collection. The result is to establish a close relationship between them and also with the building itself and the surrounding urban context of the Paseo del Prado.

The first intervention is to be seen in the Ariadne Rotunda in the Museum, in which the preeminent work is the large-scale, recently restored sculpture of the Sleeping Ariadne (anonymous sculptor, 150–175 A.D.). Next to it is the sculpture of Venus with a Dolphin (anonymous sculptor, 140–150 A.D.), who now becomes the principal focus of this space. From the room's ceiling Blanco has suspended a dolphin's skeleton from the Museo Nacional de Ciencias Naturales.

Room 55B in the Prado is another space transformed into a natural history collection by Blanco through his introduction of the skeleton of a snake wound round itself, located next to Dürer's two panels of Adam and Eve. The skeleton is one of the most beautiful objects in the Museo de Ciencias Naturales' reptile collection. Through this juxtaposition, Dürer's two nude studies remind us even more forcefully of the subject of human proportions, which Blanco considers "a scientific endeavour." Here he reveals an aesthetic intent in his placement of the skeleton, while "the snake's flexibility resulting from its numerous vertebrae echoes the sinuosity of Dürer's figures."

Also on loan from the Museo Nacional de Ciencias Naturales are three naturalised amphibians and reptiles, conserved in old jars and here juxtaposed with Goya's oil of The Witches' Sabbath. They are a common toad (Bufo bufo), a cobra (Naja melanoleuca) and a salamander (Salamandra salamandra gallaica). Next to the painting visitors can also see a bat's skeleton under a glass dome and the skull with horns of a hartebeest (Alcelaphus major), hung upside-down.

Blanco's twenty-two installations are completed with one of his own works, Book-box no. 1072, which is part of the work for which he is best known, the Forest Library. It consists of 1,131 book-boxes housing natural elements, each one forming a micro-landscape. The book-box that he has chosen for this intervention acquires meaning in front of Lucas van Valckenborch's Landscape with an Iron Works of 1595.

The Madrid born Blanco, who is one of the principal Spanish artists directly associated with nature.

Exhibition organised by the Museo del Prado with the special collaboration of the Higher Council for Scientific Research CSIC.