The artist explores the idea of home and memories of personal space by reproducing, in actual scale, objects from his former New York City apartment. Also included in the exhibition are smaller objects from the artist's former home in Berlin in green fabric. 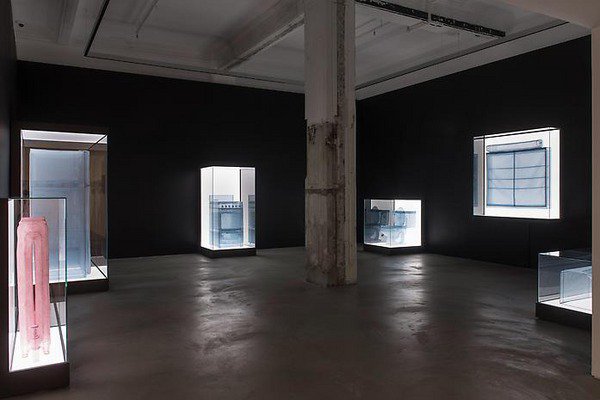 For the exhibition, Suh explores the idea of home and memories of personal space by reproducing, in actual scale, objects from his former New York City apartment. Whether it is a light switch, doorknob, refrigerator, or bathtub, Suh believes an individual’s particular memory of space can be captured by these everyday objects, and that the physical contact and mental memory of an item’s place and form within the home creates a familiarity within one’s spatial dynamic. Similarly, these objects are a way for Suh to remember the New York City apartment he occupied from 1997 to 2011. The fabric sculptures include a true-to-life radiator from the corridor of his building in red fabric, and a medicine cabinet, bathtub, refrigerator, stove and toilet from the interior of his apartment in blue fabric. Also included in the exhibition are smaller objects from the artist’s former home in Berlin in green fabric in addition to similar items in red and blue from his New York home. This collection of translucent sculptures is a continuation of Suh’s ongoing Specimen Series, which the artist has ambitiously expanded for the Hong Kong exhibition by turning his attention to larger and more complex objects, and presenting them in new and innovative ways that utilize light to highlight their transparency.

Do Ho Suh (b. 1962, Seoul, Korea) currently lives and works in London, New York, and Seoul. Suh originally studied oriental painting in Seoul National University before moving to the United States in his late 20s to study painting and sculpture in Rhode Island School of Design and Yale University. Since the mid-1990s, Suh has questioned the conventional notion of personal space and explored the variable dimension and mobility of this idea in both its physical and metaphorical manifestations. Suh’s full-scale “homes” of semitransparent cloth, including the traditional Korean house (hanok) of his childhood and his apartment in New York, explore basic human values and overarching themes of home, family, tradition and origination. Through these works he examines the place where one spends life’s moments and how that space consequently nurtures one’s identity. By recreating personal structures into something easily movable and detachable, Suh questions the boundaries between public and private space, between a faraway birthplace and a current abode, and between the land of memories and actual places.

Press Enquiries:
For more information on the exhibition or the artist, please contact Charlotte Yip of Sutton PR Asia, at charlotte@suttonprasia.com/+852 2528 0792