Traces to Nowhere is his Asian exhibition debut and he demonstrates Weischer's ability to examine to balance between chaos and harmony, situating his paints at the intersection of the realistic and the imagined. 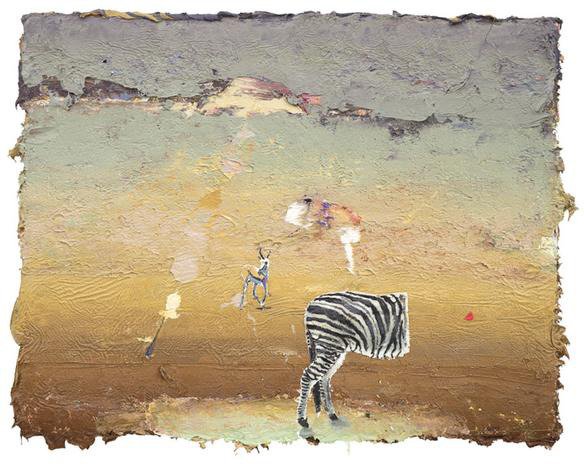 Lehmann Maupin is pleased to present Traces to nowhere, an exhibition of new works by artist Matthias Weischer, on view at the gallery’s Hong Kong location from September 8 through October 3, 2015. Showcasing a group of new paintings, Weischer is presenting a solo exhibition in Asia for the first time.

Weischer, a graduate of the Leipzig Academy of Visual Arts, is known for his association with the “New Leipzig School” a group of painters who came to prominence roughly a decade after the fall of the Berlin Wall. Originally schooled in classical painting techniques, the artist has since developed, in a broad sense, two conceptual approaches in his practice. Of primary interest is Weischer’s exploration of new ways of perceiving and depicting three-dimensional space. Weischer is also attuned to identifying the scope, importance, and historical meaning of painting as a medium and system of representation. The artist is keenly interested in the process of composing paintings, examining the balance between chaos and harmony, and situating his works at the intersection of the realistic and the imagined.

In many of the artist’s works, contained spaces such as yards, domestic interiors, parks and gardens present regions of illusory and enigmatic narratives. Weischer explores his depicted spaces in great detail, disrupting any superficial harmony and exposing the disorder that exists directly beneath the surface. The artist omits any trace of the figurative form, prompting the viewer to mentally occupy the spaces of his paintings. While the figure is omitted, he does fill his depicted spaces with traces of a human's presence, including ornaments and décor that infer personal choices. Accentuated by his collage-like approach to constructing imagery, Weischer employs forced perspectives that challenge how viewers perceive space. Patterned walls give way to unexpected views of interiors and fragments of truncated spaces, reaching past logical boundaries.

The artist’s recent works, such as those included in his Lehmann Maupin exhibition, have become more spontaneous and poetic with the incorporation of landscape and natural elements. While Weischer continues to paint with forced perspective, the inclusion of singular, flat elements that appear to be floating in the picture plane add another level of complexity. Weischer utilizes these figurative forms to explore new ways of harmonizing the relationship between objects and space within the pictorial plane.