A selection of videos by Anna Maria Maiolino, whose multidisciplinary practice has over the past half-century explored the viscerality of embodied experience. Paz Errazuriz presents a selections from two bodies of work: La manzana de Adan and Boxeadores, both of which were made during the brutal military dictatorship of Pinochet. 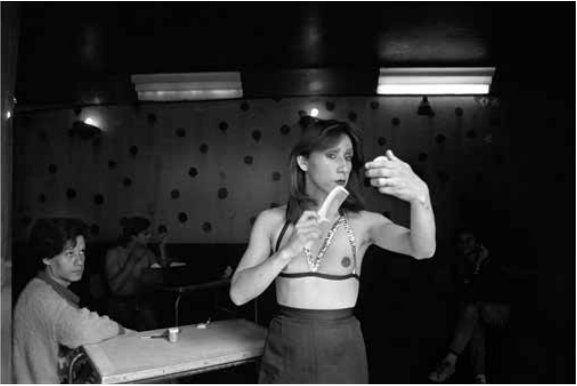 MATRIX 252 presents a selection of videos by São Paulo–based artist Anna Maria Maiolino (b. 1942), whose multidisciplinary practice has over the past half-century explored the viscerality of embodied experience, often obliquely through fragmentation and abstraction. Born in Italy, Maiolino moved to Brazil in 1960, living first in Rio de Janeiro where she became involved with the various artistic movements of the time—New Figuration, Neo-Concretism, and New Brazilian Objectivity—working closely alongside artists such as Lygia Clark, Antonio Dias, Hélio Oiticica, and Lygia Pape. By the 1970s, when artists were engaging with the social and political issues of their time, the Brazilian military dictatorship (which assumed power in 1964 and lasted for over twenty years) had reached its bleakest period, and its resultant brutality became a subject for Maiolino’s work. This exhibition features a group of four videos, originally shot on Super 8 film, from the 1970s and early 1980s that use the body to express the experience of living under an oppressive regime.

In In-Out (Antropofagia) (1973) we see a close-up of two mouths—one male, one female—attempting to communicate while obstructed by various objects (tape, an egg, and string). The title derives from Oswald de Andrade’s important 1928 Manifesto Antropófago (Cannibal Manifesto), which grounds Brazilian modernism in the cannibalization and inventive reprocessing of other cultural and linguistic influences. In two subsequent works, X and Y (both 1974), we see more close-up shots of faces; in the former eyes are imperiled by snapping scissors, and in the latter they are blindfolded while the mouth emits a cry. In each of these works, the human body struggling to find a mode of expression becomes a metaphor for living under censorship and political repression.

Anna Maria Maiolino / MATRIX 252 is organized by Apsara DiQuinzio, curator of modern and contemporary art and Phyllis C. Wattis MATRIX Curator. The MATRIX Program is made possible by a generous endowment gift from Phyllis C. Wattis and the continued support of the BAM/PFA Trustees.

This exhibition includes a selection of thirty photographs from La manzana de Adán (Adam’s Apple) (1982–87) on view in Gallery One. This is the first comprehensive display of the series in the United States. In addition, ten photographs from Boxeadores (Boxers) (1987) are on view in the Theater Gallery. All photographs are gelatin silver prints and are courtesy of the artist and Galería AFA, Santiago.

Chilean photographer Paz Errázuriz (b. 1944), who has been living and working in Santiago since the 1960s, is known for her honest portrayal of people living on the fringes of society. This presentation, her first solo museum exhibition in the U.S., showcases selections from two bodies of work: La manzana de Adán (Adam’s Apple) and Boxeadores (Boxers), both of which were made during the brutal military dictatorship of Augusto Pinochet, which lasted from 1973 to 1990.

Errázuriz first exhibited the photographs in La manzana de Adán (1982–87) just before the regime toppled in 1990; after democracy was restored, she published the accompanying book, made in collaboration with the journalist Claudia Donoso. The pictures and book together document the lives of a group of male prostitutes and transvestites that lived and worked in Chilean brothels in the 1980s. Errazuriz and Donoso befriended them, developing long-standing relationships, while recording their stories. The photographs and texts document a group of individuals marginalized by society: people forced to live primarily underground, due to the extreme danger they risked if discovered by the police. In Boxeadores (1987), Errázuriz turns her camera to a different group of men: boxers who fought in neighborhood gymnasiums. Her moving portraits of young men, all shot isolated against a wall, reveal a masculinity defined by sport, but also rooted in a particular community and social space. Both series display Errázuriz’s authentic and deeply human approach to portraying those on the margins, men who could be considered more antiheroes than heroes.

In 1981 Errázuriz founded the Association of Independent Photographers (AFI) for photographers committed to documenting life on the street in Santiago during Pinochet’s violent regime. Since then, Errázuriz has remained committed to making work that shows, in her words, the “closed, marginal spaces of minorities who exist outside the system, outside the realm of power.”

Paz Errázuriz / MATRIX 251 is organized by Apsara DiQuinzio, curator of modern and contemporary art and Phyllis C. Wattis MATRIX Curator. The MATRIX Program is made possible by a generous endowment gift from Phyllis C. Wattis and the continued support of the BAM/PFA Trustees. Additional funding is provided by The Jay DeFeo Trust.