Between Heaven and Hell. The first in a series of site-specific exhibitions created out of the specifics of time and place.Taking place in and above Gstaad, it will be comprised exclusively of Swiss artists and most of the works will be outside, positioned in and defined by the landscape they inhabit. 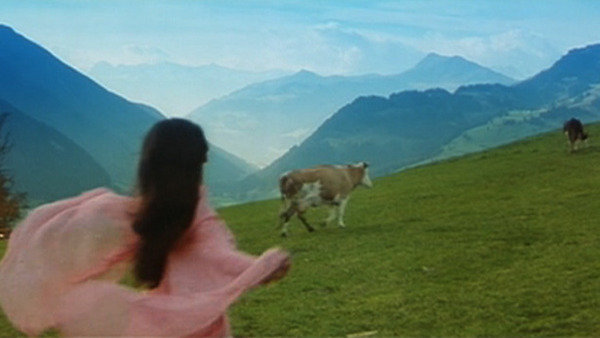 Curated by Neville Wakefield and Olympia Scarry and produced by the LUMA& Foundation.

Elevation 1049 is the first in a series of site-specific exhibitions created out of the specifics of time and place, curated by Neville Wakefield and Olympia Scarry and produced by the LUMA& Foundation. Taking place in and above Gstaad, it will be comprised exclusively of Swiss artists. As the title suggests, most of the works will be outside, positioned in and defined by the landscape they inhabit. Held in the midst of winter, Elevation 1049 will exchange the confines of the white cube for the expansive snow-covered backdrop of the Alpine landscape. Using elevation is the measure of difference each project will, in different ways, mark the separation of earth and sky, of heaven and hell. Tracing the contours of what lies underfoot and our aspirations above, Elevation 1049 will be the map of this territory. Elevation 1049 will be on view January 27 through March 8, 2014 and will be free and open to the public.

Gstaad first gained place on the international map in the sixties when it was named ‘The Place’ by time magazine . Its extraordinary natural beauty was a magnet for a wide range of creative types, from actors and directors (Elizabeth Taylor, Roman Polanski), musicians (Yehudi Menuhin) as well as artists ranging from Balthus to the children’s book illustrator Richard Scarry. While continuing to host the acclaimed Menuhin music festival, unlike other resorts such as St. Moritz, Gstaad has yet to have a public platform for the visual arts. The aim of Elevation 1049 is not only to revive dialogue between the creative community and the region but also to focus the very best of contemporary Swiss art on and around its quintessential village.

The last two decades have been witness to an efflorescence of Swiss art unlike any since Dada. (Surveys of top 100 contemporary artist lists reveal total number of Swiss artists to be as many as France, Spain and Italy combined.) But where Dada was focused on a particular place (Zurich) many, if not most, of the current generation live and practice outside of Switzerland. Elevation 1049 will be a first large-scale exhibition to take place in the mountains during the winter, as well as the first concentration of exclusively Swiss artists creating site-specific work in their place of origin.

The show will be presented as a journey of discovery one in which Gstaad will be discovered through the artists and art discovered through Gstaad. The works commissioned and created specifically for the show will cover a variety of locations. Some will be easily visible and accessible in locations such as the town ice-rink, railway station or main street while others will be more challenging and require a trip to the peak of the Wispile, the Saanen airport or a remote Alp hut. Alongside the commissioned work there will be a number of sub-shows, performances and events linked to the project, aimed at engaging a wide range of audiences. A website acts as catalogue and guide. For those who can not make the trip to Gstaad, it will be a glimpse into a unique and extraordinary project.

Olympia Scarry is a Swiss artist living in New York. Her work traces mental and physical landscapes recorded through polygraph examinations, animal interactions and the human response to extreme or delicate situations. Her grandparents lived in Gstaad, and were known for their children’s books.

Neville Wakefield is a writer and curator who lives in New York. His most recent show in Switzerland was Matthew Barney: Prayer Sheet with the Wound and the Nail at Schaulager Basel.

Elevation 1049 has been produced by Basel based Marc Bättig. Recent projects include Doug Aitken: Altered Earth and To the Moon via the Beach, commissioned by the LUMA Foundation in Arles, France; Jeff Koons: Split Rocker, commissioned by the Fondation Beyeler in Basel/Riehen and Parcours as part of Art Basel.