The large-scale work 'Cloud Atlas' is part of a group of photographs that the artist developed in Basel last summer. It shows an illustration of a part of the sky. 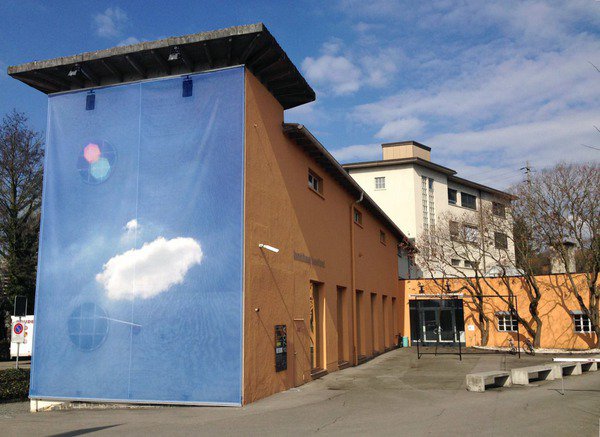 The Basel artist Bianca Pedrina has been invited to create a work within the framework of the yearlong 2014 project ‘Designing the Exterior Façade of the Kunsthaus Baselland’.

The large-scale work ‘Cloud Atlas’ is part of a group of photographs that the artist developed in Basel last summer on the occasion of the project ‘100 Jahre Meret Oppenheim. Das Geheimnis der Vegetation’ (100 Years Meret Oppenheim. The Secret of Vegetation). In this series Bianca Pedrina engages with the question of how much photographs can communicate reliability and truthfulness in a world – as the artist puts it – in which a flood of images of monstrous proportions accompanies each one of us continually.

The work ‘Cloud Atlas’ thus looks into this question, from the artist, of how a work can make its topic the singularities of the medium of photography and, in so doing, the connection between reproduction and reality. This very thing is picked up in the work ‘Cloud Atlas’: it shows an illustration of a part of the sky. As the artist describes it, a single cloud can be seen there, surrounded by soft, dissolving vapour trails as well as two bright hexagonal reflections from the artist’s camera lens. These so-called ‘lens flares’ are brought into photography as a painterly moment, a kind of ‘ancillary tool’ within the true representation of reality. In this work we experience the coordination of several pieces of information that coexist in a particular moment, of which, however, all the facets are not visible, and we are given the choice of what we want to accept as reality.

In her photographic work Bianca Pedrina frequently engages with the process of visual perception. She often traces architecture and its history, in relation to its form and its content. Questions of the relationship between a viewer and his direct environment and photography’s claim to truth in general are central to her work.