Late works. He was the first to return figuration to postwar American painting, with a combination of "high art" with images from popular culture. The exhibition presents a selection of seventy paintings and drawings. 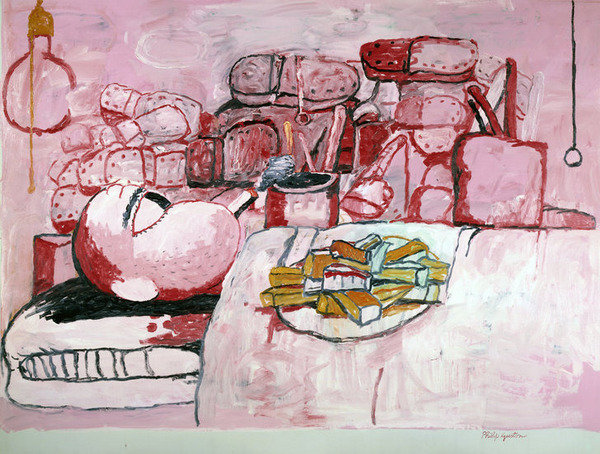 The bold and extraordinary oeuvre of the American painter Philip Guston (1913–1980) was one of the most widely discussed of his time. He was the first to return figuration to postwar American painting, was innovative in his combination of “high art” with images from popular culture, and is today celebrated as the pioneer of postmodern, figurative painting. On the occasion of the artist’s 100th birthday, from November 6, 2013, to February 2, 2014, the Schirn Kunsthalle Frankfurt is presenting late works by Philip Guston as a milestone of American painting. With a selection of seventy paintings and drawings, the exhibition unites loans from the Museum of Modern Art, New York, the Centre Pompidou, Paris, and the Stedelijk Museum, Amsterdam.

The autodidact Guston gained a foothold in New York’s art scene in the 1950s and became one of the most important representatives of Abstract Expression around Jackson Pollock, Willem de Kooning, and Mark Rothko. An intense drawing phase began in the late 1960s, culminating in a painterly break with the “purity requirements” of abstraction: Guston introduced crude figures and fragments of figures into his works; they populated his pink, red, black, and blue canvases - smoking, drinking, often painting as well. Guston’s subjects include large heads, hairy legs, clumsy shoes, and all manner of architectural fragments such as walls, doors, and light bulbs reminiscent of 1920s comics, and they often come over as the precursors of “Bad Painting”. The large-format works come down full force on the viewer. Despite their apparent formal weightiness, content-related openness, and blurred mystification, the paintings are based on profound sensitivity and the artist’s far-reaching content-related and painterly consistency.
In 1970, the first exhibition of these paintings outfitted with an anarchistic sense of humor and the grotesque caused an art scandal in New York, as numerous critics took offense at his “betrayal” of abstract art. Yet the intensity and unsettling power of Guston’s late works exercise an enormous influence on many of today’s younger artists.

“Philip Guston. Late Works” is sponsored by the Deutsche Bank Stiftung.
Max Hollein, director of the Schirn: “Radical, surprising, and challenging: eyed critically during his lifetime, Philip Guston’s late works are meanwhile regarded as the most well known and most important works in his oeuvre. Our exhibition seeks to provide fascinating insight into this important phase of the American painter for the first time. Guston’s late work is an outstanding phenomenon and has essentially influenced and impressed a subsequent generation of painters both in the United States as well as in Europe.”

“Guston has always been, and continues to be, an ‘artist’s artist.’ Despite his presence in large collections, his late works in particular are considered to be an insider’s tip. For the viewer, they are discoveries; elusive and touching at the same time,” states Dr. Ingrid Pfeiffer, the curator of the exhibition. “While at first glance they appear to be simply structured, Guston’s paintings are of outstanding quality and characterized by a sensitive reflection of himself and the events of his day.”

Philip Guston is born Philip Goldstein in Montreal, Canada, in 1913 as the son of Russian-Jewish parents. He grows up in Los Angeles and demonstrates a talent for painting at an early age. His artistic and personal defiance prompt him to leave art school. His entire life is characterized by his intense involvement with European art history. His role models include Pablo Picasso, Max Beckmann, and Giorgio de Chirico, as well as Goya and Rembrandt. Guston travels to Italy in order to examine Renaissance and Baroque painters such as Giotto, Piero de la Francesca, and Tiepolo. He is also interested in Mexican muralists. This is associated with his strong political involvement, whereby he sympathizes with left-wing groups and artists. In 1936 he adopts the artist’s name Guston and moves to the East Coast, quickly gaining a foothold in New York’s 1950s art scene. He becomes one of the most important representatives of Abstract Expressionism along with fellow artists such as Jackson Pollock, Willem de Kooning, and Robert Motherwell. For the critics, his later renunciation of this postwar art form, which was so decisive for America, is all the more serious. Guston plunges into an existential crisis in 1965 and concentrates on drawing for a good two years. It is not until the late 1960s that he increasingly paints, and figuration returns to his work. In 1970, the first exhibition of these new paintings meets with a lack of understanding even in his own environment, and it evokes hostile reactions among art critics. The potential of these sophisticated paintings is not acknowledged until the late 1970s. In 1980, shortly before his death, the San Francisco Museum of Modern Art devotes a large-scale retrospective to Philip Guston. The last extensive presentation of Guston’s oeuvre in the German-speaking world took place in Bonn in 1999.

“I got sick of all that purity! I want to tell stories!”*

With around 650 large-format paintings and hundreds of drawings, Guston’s late work was overall his most productive phase. New ideas developed out of an altered world of motifs. On the one hand, Guston’s examination of in part bizarre, violent comics as a child began to surface, while his works were permeated by a wide range of allegories and heavily symbolic objects on the other: huge hands, for instance, whose fingers point down from the heavens like the Last Judgment; clocks that, like a memento mori, visualize the passing of time; light bulbs that symbolize the light of knowledge and the spontaneous idea; burning cigarettes as a symbol of the briefness of life, which burns up all the more quickly the more deeply one inhales the smoke; fragmentary limbs reminiscent of massacres and escalating violence. In his use of this allegorical pictorial language, Guston does not provide the viewer with a palpable interpretation; rather, the highly educated artist plays with the symbolic value of objects. With his apparently primitive choice of motifs and comic-book-like scenes, he creates distance, blends high and low, and disrupts the viewer’s expectations.

“My whole life is based on anxiety - where else does art come from, I ask you?”*
There has been much speculation over the reasons for Guston’s artistic orientation and his ultimate change in direction, for example his struggle with lifelong depression due to tragic experiences in his childhood or an identity crisis caused, among other things, by his name change in the mid-1930s. It seems certain that his entire life was marked by melancholy and black humor. Yet like numerous other artists, Guston had the energy and strength to productively integrate all of his doubts, fears, and conflicts into a large number of powerful paintings. This is demonstrated above all in the numerous self-portraits among Guston’s late works. They recall distorted Cyclops, sorrowful giants with oversized heads. At the same time, the artist prefers to depict himself in a gloomy mood, eating, drinking, and smoking excessively or wearing a mask.
This relentless handling of himself is underscored by the large formats of these works, which allow more space for self-analysis. This is also emphasized by the artist’s preferred use of cadmium red, to which he adds white to produce pink, deliberately turning it into a “non-color.” He intensifies and counteracts the seriousness and the severity of the depicted scenes and heightens bizarre effects to the point of absurdity. Guston’s preferred color palette with black and red dramatically and effectively reinforces his strategy of content-related circumvention, rupturing, and surprise.

“I paint what I want to see.”*
Alienation, combinatorics, and metamorphosis - three basic principles of Surrealism that also appear time and again in Guston’s late works. The artist places unexpected objects in the pictures that lack context. The individual object changes constantly. Guston elicits irritation and uncertainty, yet he likewise creates surprising elements and ambiguity. He deliberately sets mental and psychological processes in motion in the viewer. The artist himself placed emphasis on the unconscious, which participates in the success of his work and forces itself into his paintings.

The exhibition developed by the Schirn Kunsthalle will subsequently be presented at the Falckenberg Collection part of the Deichtorhallen Hamburg (February 22–May 25, 2014) and at the Louisiana Museum of Modern Art in Humlebæk (June 4–September 7, 2014).