Laura Lima presents a selection of performative installations that focuses on the question of magic. Her works are experimental arrangements that explore the margins of our perception. Collection on Display: the current cycle focuses on functions, models, and interpretations of space and interiors in contemporary art. 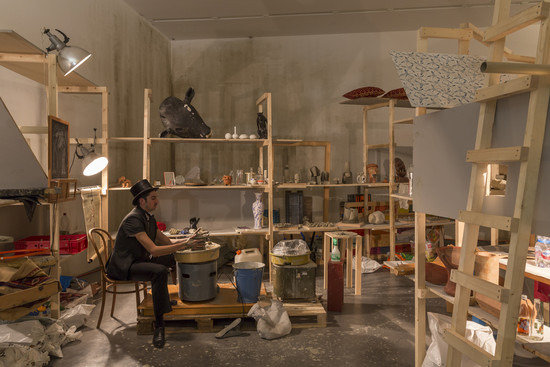 Collection on Display presents selected works from the collection of the Migros Museum für Gegenwartskunst. The current cycle focuses on functions, models, and interpretations of space and interiors in contemporary art. The installations, shown in three parts, address specific spatial arrangements and their conceptualizations. In the second part, works by Emmanuelle Antille, Christoph Büchel, Angela Bulloch, Phil Collins, Alicia Framis, Olaf Nicolai, Cady Noland, Costa Vece, and Stephen Willats are on display. They examine the participatory potential of architectures and the viability of social community and the individual in space.

In recent decades, artistic involvement with issues of space has seen profound engagement in terms of both content and form. In installational formats, very different spatial models are transferred from the private as well as public domains into the exhibition space.

The works shown in the second part of the exhibition are closely related to the forms of institutional self-reflection that characterize the history of the museum. In the 1990s, the era in which the Migros Museum für Gegenwartskunst was founded, an important debate took place in the form of spatial settings created by artists. The goal was to dispel fixed notions of the traditional museum via artistic interpretations of what a museum should look like “today.” Great importance was ascribed to the idea of involving the observer. This effort is evident, on the one hand, in spatial settings that prompt the observer to carry out a particular activity or action. Many of the installations exhibited here are examples of practices that can be grouped together under the term “participatory art.” On the other hand, the works on display reflect on the social connection between spaces and their occupants as well, while also referring to the concept of participation with this community interest on a meta-level.

The artistic practice of Laura Lima (b. Governador Valadares, Brazil, 1971; lives and works in Rio de Janeiro, Brazil) is defined by her fascination with the complexity of social relations and forms of human behavior. Her scenarios, in which the human body is often the central medium and driving force, combine performative components with a wide range of media of artistic expression such as drawings, sculptures, and installations.
Lima herself never acts in her pieces, instead instructing selected protagonists to enact her dramaturgic designs. The Brazilian artist’s first solo exhibition in Switzerland features The Naked Magician (2008/10/13) and Bar Restaurant (2010/13), a selection of performative installations that focuses on the question of magic.

Laura Lima’s works are experimental arrangements that explore the margins of our perception along the boundaries between reality, illusion, and fiction. In the works presented in Zurich, she evokes mysterious worlds that revolve around the question of magic without raising it openly.
A slightly different version of The Naked Magician was on display in 2010 as part of the exhibition Grande at the Casa França-Brasil, Rio de Janeiro. An apparently chaotic system of shelves—the arrangement looks like frozen in mid-collapse—forms a installational framework in which a protagonist executes Lima’s instructions. Dressed in a well-fitting suit—only the sleeves are far too short—he imperturbably pursues occupations that remain opaque. A plethora of different objets trouvés sits scattered across the slanted shelves—defying gravity—serving the performer as materials and tools for his incessant activities, whose purposes are never explained but which nonetheless do not seem arbitrary. The beholder becomes the observer of his creative actions a constant balancing act between chaos and order, insanity and reason: complementary opposites that appear in an inseparable union.

Lima’s second work, Bar Restaurant (2010/13), is set in a peculiar sort of bar: its furniture is occupied not by people but by objects. Stacks of paper, sacks of flour, cylindrical figures and rectangular solids in bright colors sitting on chairs, with full glasses of beer on tables arranged in front of them that mysteriously empty over time. A protagonist playing the waiter busily refills the glasses, maintaining the strange situation. Once again, the work sets up a scenario that evokes associations of magical, ineffable, and sometimes absurd goings-on amid a perfectly “normal” everyday setting.

Both pieces display aspects of rational order side by side with magical animation without passing value judgment on either — especially in light of the booming interest in magic in the Western popular media, which coexists uneasily with the rigorous rationalization of all realms of our lives, that suggests a reading in which Lima’s works point up the dualisms of our time.

Laura Lima’s works have been presented at Art’s House, Melbourne, Australia (2013), the Ruhrtriennale, Essen (2012), the Lyon Biennial, the Bonniers Konsthall, Stockholm, and the Manchester Art Gallery (all in 2011). Lima is also a cofounder and artistic advisor of the artist-run gallery A Gentil Carioca, Rio de Janeiro.

Catalogue:
In conjunction with the exhibition, JRP|Ringier will publish a monograph produced in collaboration with the Bonniers Konsthall, Stockholm, and including essays by Sara Arrhenius, Victoria Noorthoorn, Heike Munder, Jochen Volz and an interview with the artist.