What Did The Artist Mean By That? The first comprehensive retrospective of one of the most prominent representatives of the Moscow conceptualism. It covers artist's multifaceted oeuvre since late 1970s-paintings, drawings, installations, documentation of performances and projects. 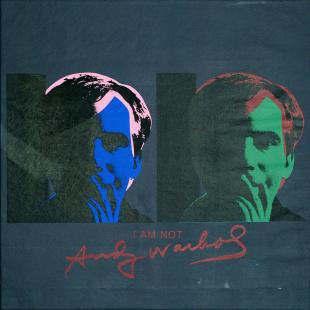 The MMOMA presents the first comprehensive retrospective of Yuri Albert (born 1959), one of the most prominent representatives of the Moscow conceptualism, now living between Moscow and Cologne. It covers artist's multifaceted oeuvre since late 1970s—paintings, drawings, installations, documentation of performances and projects, solo works and those done as part of the "Cupidon" group, and, first and foremost, the kind of textual conceptual works that made him famous. However, when the show opens, the textual display which looks like one typical of Yuri Albert is not actually his own.

The retrospective, co-authored by the curator Ekaterina Degot, makes for an intersection of two exhibitions. It starts as curator's show featuring only descriptive-interpretative texts about works by the curator and other authors, which take the actual work's space on the walls or appear as projections or sound, depending upon the respective work's medium. In the course of a month, Yuri Albert's version of the exhibition will gradually appear, covering these texts, erasing them to leave the art works "bare," while the interpretations migrate to the publication. What begins as a retrospective for initiated "art professionals" will turn into an exhibition "for collectors"; the necessity to imagine works by their description will give way to the longing for comments, now unavailable.

In his works, Albert continually questions the conditions of art production and spectatorship. He proposes museum tours with eyes blindfolded or with a stone in the shoe, he copies volumes of artists' letters by hand and translates descriptions of missing art works into Braille. His idea of art is, certainly, art as an idea, but this idea is a tangible part of everyday life: Albert's work is rooted in the self-organized artistic practices of the Soviet 1970s, which had a unique historical chance to exist far beyond both market and institutions. For him, art is the ultimate universalist field, un-privatized and un-monetarized. Rather than addressing issues of acquisition and circulation, his institutional critique centers on notions of understanding and interpretation. Committed to the nihilist, avant-garde genealogy of contemporary art, Albert deeply believes into the condition of being disliked and misunderstood, but he sees the emancipatory potential of art in what he calls its "elitist-democratic" nature, close to other self-proclaimed elites, like stenotypists, whose specific system of signs is as opaque for the uninitiated as, allegedly, is the language of contemporary art.

Yuri Albert has been a member of the Moscow Conceptual Circle since the 1970s. He is one of the founders of the Club of Avangardists, a participant of the Apt-Art exhibitions in Moscow. In 2011, he received the Kandinsky Prize for his project Moscow Poll.

Ekaterina Degot is a Moscow-based curator and critic. Her most recent curatorial project, in collaboration with David Riff, was Monday Begins on Saturday, the first Bergen Assembly in Bergen, Norway (2013).