These stories are the ever unique accounts of Mamco's relationships with the artists who come here, or return here, to show us how their work has been progressing. The exhibition "The stutterer's gaze: physics of memory" provides a subjective sweep of the collection on display at the museum. 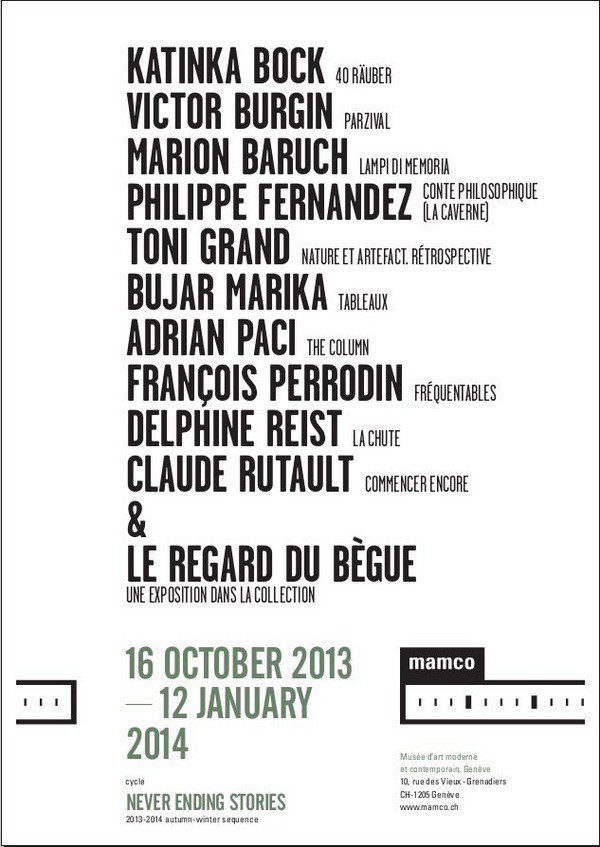 Mamco’s autumn-winter 2013-2014 sequence is the start of a new cycle entitled The never ending stories. This may refer to the more enduring status of our museum, now officially acknowledged as being of ‘strategic importance’ to the Canton of Geneva. Yet these endless stories may also suggest the administrative complications associated with reaching adulthood – whether the ‘adult’ in question is a person or a museum. And, above all, these stories are the ever unique accounts of Mamco’s relationships with the artists who come here, or return here, to show us how their work has been progressing.

The fourth-floor exhibition Le regard du bègue: physique du souvenir (‘The stutterer’s gaze: physics of memory’), following on from last spring’s Partage de minuit (‘Midnight sharing’), provides a subjective sweep of the collection on display at the museum. The works are in dialogue with one another, weaving together the threads of dreams, melancholy and burlesque.

Delphine Reist
On entering the Don Judd Loft, visitors will no doubt have a frustrating sense of having got there too late, when it’s all over, and seeing nothing but the remnants, the ruins of a spectacular, violent performance which Delphine Reist, who lives and works in Geneva, has called La Chute (‘The Fall’). On the floor is a large piece of ceiling that has just come down, exposing its metal skeleton. A little further on, another destructive force, another effect of the laws of gravity can be seen in a large wine stain on the wall together with bits of broken bottle, the result and the cause of a movement halfway between a drunken brawl and the polished ritual of a christening. For her first exhibition at Mamco, Reist presents an installation that is full of nods to history (that of the various avant-gardes as well as the fall that is such a key part of Christian iconography) and profoundly transforms one of the museum’s main spaces.

Marion Baruch
After moving from Hungary to Italy in the 1950s, Marion Baruch based her artistic work on the then flourishing textile industry in the northern region of Lombardy. Her sole material was scraps of fabric, which she chose ceremoniously, dis- playing them in metaphorical portraits and making them grow on the wall as though they were trees. Born in 1929 and marked by the tragic events of the century, Baruch includes a major social dimension in her work. Her fondness for textiles, of which she only uses remnants, suggests a restles bleconsumerism. At the same time, her minimal interventions, remote as they are from ‘women’s work’, can also be read as a scathing commentary on the working conditions of the nimfingered seamstresses (sometimes known as petites mains, or ‘small hands’) who are employed in haute couture. Now blind, Marion Baruch continues to work with her fingertips and her memories – as reflected in the title of her exhibition at Mamco, Lampi di memoria (‘Flashes of memory’).

François Perrodin
In an exhibition covering three decades of his work, François Perrodin presents paintings that are fréquentables (approachable) despite their austerity. His works are entirely grey, simply playing with the shadows of a minimalist chiaroscuro, the geometric relationships between length, width and thickness, the contrasts between matt and shining elements, and the way the paintings are hung. This work is thus completely at home in the Cabinet des abstraits, where it rekindles the mem- ory of concrete art and minimalism. Yet Perrodin’s work is more than just formal, or formalistic, research, for what matters most is the viewer’s relationship to the work. The title of his exhibition thus asserts the need for connection as a way for painting to exist.

Toni Grand
The entire second floor of Mamco presents a retrospective of work by Toni Grand (1935-2005). Initially close to the Supports/ Surfaces movement, the French sculptor was more interested in the uses of materials than in their specific qualities. His work therefore focused on acts, such as splitting or assembling, rather than material or surface effects. Exploring the ways in which artists work with materials, he made his own reassessment of the Supports/Surfaces movement’s analysis of artistic resources. The Nature and artefact exhibition reviews the various stages of Grand’s work, from his wooden sculptures in the 1970s to his later pieces that included features alien to the world of sculpture, such as a goods lift, or stuffed eels.

Philippe Fernandez
Ever since the late 1990s, Philippe Fernandez has made art-house-type films (so far four short and medium-length ones and one long one) which are usually shown in cinemas. His world, often described by critics as philosophical and burlesque, displays a striking visual coherence and a strange temporality which often makes us feel we are elsewhere, although everything he films seems realistic if not actually real. Fernandez’s first opus, produced in 1998 and entitled Philosophical tale (the cave), is no exception. Displayed on the second floor, this is a parable inspired by the myth of the cave in Book VII of Plato’s The Republic, on the pursuit of lucidity in a shadowy, make-believe world. In presenting this work, Mamco is pursuing its exploration of the current role of cinema in exhibition spaces.

Katinka Bock
For her first exhibition at Mamco, the German artist Katinka Bock has treated the Plateau des sculptures as a landscape painting. Landscapes, she says, are not nature, but always a way of seeing nature. Yet she wants to offer viewers an over-all view so that they can then get lost in the details – all of which are sculptures, by no means symbolic or illustrative, for the raw materials in this work are used for what they are rather than for their symbolism (a lemon is a lemon, not a sun). We should also note that the space assigned to Katinka Bock’s exhibition suggests to her a public place in which each feature is very precisely arranged – a place where citIizens walk. Although the works are often produced with the help of calculation, they are also like notes of music on a staff. An acceleration or a regular beat is all that is needed for viewers to compose their own music, just as they would construct a sentence. Terracotta sculptures, and use of natural elements such as rain, are also recurring features of a sculptural vocabulary that is amply and richly reflected in Bock’s 40 Räuber (‘40 thieves’) exhibition.

Victor Burgin
Parzival is a filmic reverie, based not exactly on the Wagner opera but on a particular moment in the composer’s life. In a very personal way, Burgin attempts to recapture Wagner’s sojourn in Venice from 1858 to 1859. During this period, having stopped working on The Ring of the Nibelung, he finished Act II of Tristan and Isolde. But his thoughts were already drifting towards Parzival. He had read the mediaeval epic poem long before, and it would be another twenty years before he turned it into an opera. What interests Victor Burgin is the point at which, in Wagner’s mind, the topic was no longer just a poem but was not yet an opera. It was an object of thought, of daydreams, with the musician’s daily, personal or political ideas clinging to them. What Burgin is thus seeking is this hazy, in-between Parzival – and his film is the luminous trace of his encounter with Wagner.

Adrian Paci
Presented in the collective exhibition “Isola (Art) Project Milano” in 2003, Adrian Paci offers his latest works, The Column, projected on the first floor. Born in Albania but based in Milan since the late 1990s, Paci has produced a wide range of different work (paintings, photographs, videos, sculptures and installations) in which the moving image plays a prominent part and the question of movement likewise predominates. ‘Being at the crossroads, at the boundary between two separate identities, is a part of all my film productions’, he says. And indeed his half-hour film The Column explores and exhibits the time of movement – geographical movement, but also the movement of a historically ancient architectural form, treated here as a metaphor for the present-day human condition. A work of outstanding visual beauty, The Column is also a voyage through memory.

Bujar Marika
While pursuing the scientific training that led him to be a teacher, an editor of the Albanian journal Shkenca dhe Jeta (‘Science and Life’) and above all an internationally renowned designer, Bujar Marika – who was born in Tirana in 1943 and died in Geneva in 2009 – was always greatly attracted to art and architecture. But it was not until the age of 52 that he embarked on his career as a visual artist. His work, which has been regularly exhibited at Mamco and is part of the museum’s collection, revolves around the basic features identified by the artist as ‘forms, colours, technique, frontality and immediacy’. These features recur in all his paintings on display this autumn – paintings whose economy of form, neutral and impersonal treatment of the surface and minimalist approach are the predominant features of a remarkable, and in many ways unclassifiable, body of work.

Claude Rutault
The four rooms of the Suite genevoise display the latest stage of Claude Rutault’s painting. The artist’s ‘inventory’, updated once more for this new exhibition, has been a permanent feature of Mamco ever since the museum first opened. Rutault is well known for painting in the same colour as the walls his paintings will be hung on. With this initial constraint, he works in the form of statements he calls ‘definitions/methods’ whose visual production is supervised by private or institutional collectors. Claude Rutault’s exhibition Commencer encore (‘Starting again’, or ‘Still starting’) presents four stages of his work – painting, not painting, repainting and depainting – which describe not only the main periods of his career but also, as the artist says, all the possibilities of painting.