The first group exhibition with more than 200 works, and focuses on the quarter of Montmartre with its stories and protagonists. Various phenomena are explored in different thematic sections. The presentation spans from around 1885 to the beginning of the First World War, when most artists moved to the southern Montparnasse area. 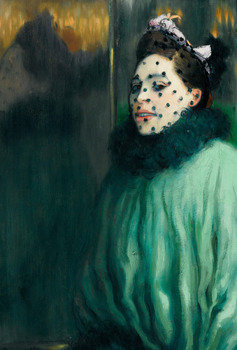 Not without reason, a contemporary critic in the 1890s wrote about Montmartre in Paris: "The quarter resembles a huge studio." Important artists such as Edgar Degas, Pablo Picasso, Henri de Toulouse-Lautrec, or Vincent van Gogh lived and worked there. With a previously unsuspected realism, they produced memorable paintings that mercilessly revealed the underbelly of the dazzling Belle Époque. With these works, which remain unique even today, they crucially influenced the history of art in the late nineteenth and the early twentieth century.

From February 7, the Schirn Kunsthalle Frankfurt presents the first group exhibition with more than 200 works, and focuses on the quarter of Montmartre with its stories and protagonists. Various phenomena are explored in different thematic sections: "Montmartre as a Village – A View of a Different Paris" confronts the visitor with atmospheric views of the neighborhood's topography. The exhibition then highlights the "Cafés, Absinthe Drinkers, and Varietés" and the representation of "Models, Dancers, and Prostitutes." A further section deals with "The Fantasy Land of the Circus." "The Montmartre as an Area for Outsiders and Social Change" introduces the visitor to the inhabitants of the district, its labourers, beggars, clochards, and washerwomen, but also to the people who participated in demonstrations in these politically and socially agitating days. While "The Network of Artists and Art Dealers" sheds light on the exchange between artists and the flourishing art market in the quarter, the last section is dedicated to "The Poster as a New Art Form" and magazine illustrations.

The presentation spans from around 1885 to the beginning of the First World War, when most artists moved to the southern Montparnasse area. The Montmartre, however, was considered a microcosm for artistic self-perception that first found literary expression in Henry Murger's novel Scènes de la vie de Bohème (1847–1849). The neighborhood soon attracted numerous artists who deliberately chose a bohemian life in impoverished circumstances on the margins of society—even though they often came from wealthy homes. Their new identity as voluntarily-involuntary outsiders was mirrored especially realistically and impressively in their art. The exhibition assembles outstanding paintings and works on paper, historical photographs, posters, and graphic works from German and foreign museums and private collections such as the Musée d'Orsay in Paris, the Tate Gallery in London, the Van Gogh Museum in Amsterdam, the Kunsthaus Zurich, the Museu Picasso in Barcelona, and the Museum of Modern Art in New York. Works by 26 artists like Pierre Bonnard, Ramon Casas, Edgar Degas, Kees van Dongen, Vincent van Gogh, Max Jacob, Marie Laurencin, Pablo Picasso, Henri de Toulouse-Lautrec, Suzanne Valadon, and other less known, yet equally fascinating artists convey a vivid impression of the historically unique atmosphere of Montmartre around 1900.

Max Hollein, Director of the Schirn Kunsthalle Frankfurt, describes the project as follows: "The exhibition Esprit Montmartre unfolds a fascinating panorama of the lively and influential art scene of Paris around 1900. At Montmartre, a moving portrait of society was brought forth with the utmost creativity by both famous and almost forgotten artists. All their works have exercised a pronounced influence on the European and the international history of art. Seeing so many works assembled in Frankfurt is a rare occasion and a special gift for the visitors."