Face of our Time. First of a series of 8 exhibitions corresponding to the 7 Volumes of People of the 20th Century. The show consists of 60 portraits of the first book published of his photography. 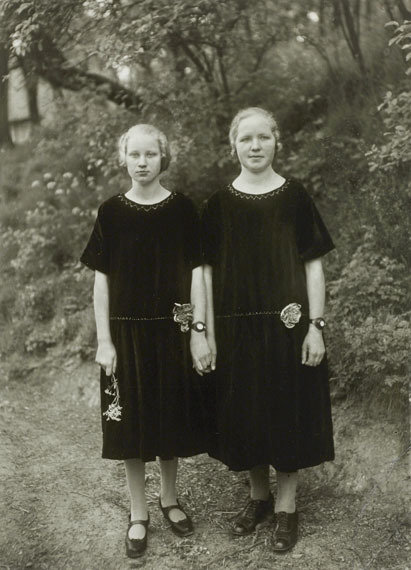 FEROZ Galerie will honor the memory of August Sander throughout the year 2014 with a series of 8 exhibitions titled the August Sander Cycle. 2014 marks the 50th anniversary of August Sander's passing. Julian Sander, the great grandson, will present the complete People of the 20th Century consisting of 619 images as well as Antlitz Der Zeit (Face of our Time) in 8 discrete exhibitions. A number of special events with round off the program.
Antlitz der Zeit consisted of 60 portraits and is the first book published of August Sanders photography.

One artist, 619 Portraits: People of the 20th Century
Starting on the March 4, 2014 Julian Sander will present the first of seven sequential exhibitions corresponding to the 7 Volumes of People of the 20th Century. In the seven groups "The Farmer", "The Skilled Tradesman", "The Woman", "Classes and Professions", "The Artists", "The City", and "The Last People" August Sander showed the full spectrum of German society in a selection of 619 photographs.

"I conceived the August Sander Cycle to fulfill a long existing dream. I want to give insight into the work of August Sander from a personal and humanist viewpoint. I personally feel that Augusts understanding of and respect for humanity was his greatest asset and the force behind his work" says Julian Sander, owner of the FEROZ Galerie. "To date this complete body of work has only been shown one time, as part of the Sao Paolo Bienial in 2012. We are very proud to show the complete project for the first time in Germany."

Behind the Scenes: The Sander Family
During the August Sander Cycle the FEROZ Galerie will be offering a series of talks and events in order to offer a deeper look at the family of August Sander, both during his lifetime and thereafter. Julian Sander will be presenting personal ephemera, letters as well as films taken of August Sander from the private family archive.