Three videos proposed in the gallery: Revolution, Total Solar Eclipse and Faint with Oxygen. This exhbition is part of Vorspiel 2014. 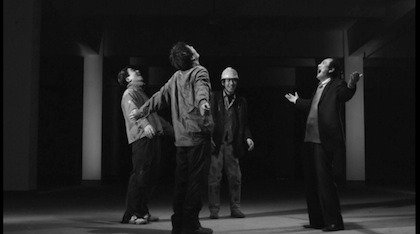 Curator Elke Falat presents a selection of video works from 2007 to 2010 by the Chinese artist Gao Shiqiang. Born in 1971, he belongs to the generation of artists who experiences the legacy of Mao and the Cultural Revolution as the background of recent Chinese reality – with all its contradictions and discrepancy. “For my generation, history has transformed into a trance and the real world into a joke”, he says. Unfortunately not a good joke, as he reveals in his works, which he describes as a “quartet of history, life, language and mind” and which contain metaphorical and political fault lines signifying states of alienation, apathy and stagnation of the post-revolutionary life in China.

In the first part of Revolution (2007, 42 min) a group of young people are staging the history of the Chinese Revolution on the rooftop of a high-rise building. Their behaviour and costumes seem exaggerated. In the second part of the film, Gao Shiqiang asks the actors for their personal ideas and ideal of life, which turn out to be very diverse. The only thing they have in common is that they are diametrically opposed to any of the ideas of the Chinese Revolution they were staging right before.

Total Solar Eclipse (2010, 46 min), is shot after the economic crisis, which also had an influence on the booming Chinese economy. On display are abandoned factories and people committing absurd acts and rituals in slow motion. In the background, piano music exacerbates the disturbing effect of the scenario.

The video Faint with Oxygen (2009, 29 min) depicts the story of a shepherd who lives in Tibet. His dream is to get to know the world and culture beyond his village. To this end, he tries to learn Mandarin, by listening to the radio. The Radio shatters and with it his dream, which was the reason for his absurd endeavour. The film also focuses on the reversed view, from the big city to Tibet and ends in front of a shop window selling traditional Tibetan handicrafts.

This exhbition is part of Vorspiel 2014. a distributed programme of transmediale and CTM partner events happening before the festivals, dedicated to present Berlin-based project spaces, collectives and initiatives that are working in the field of digital art & culture and experimental sound & music.