Art for The World

Reflections on Mother Earth, Agriculture and Nutrition. An international exhibition bringing to Brazil a contemporary perspective on man and food. On view some installations, paintings, sculptures, photographs, and videos. 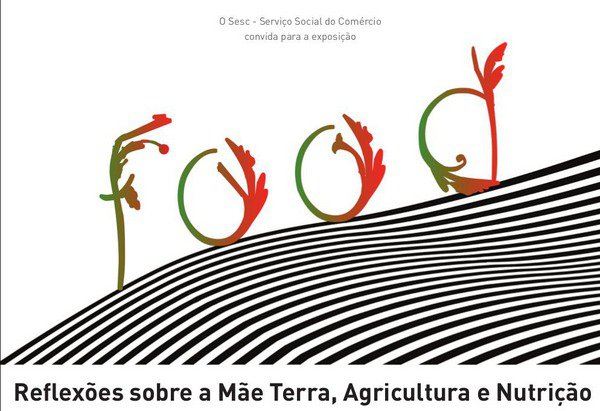 Curated by Adelina von Fürstenberg, the Director of ART for The World and the Chief Curator of the 4th Biennale of Thessaloniki, Greece (2013-­‐2014), FOOD brings to Sesc Pinheiros some installations, paintings, sculptures, photographs, and videos of these great contemporary artists approaching topics of the preservation of nature and investigating issues directly or indirectly related to food, as well as the consequences of the climate changes, the poisoning of agricultural products, the discrepancies in food distribution, and other topics related to this subject.

“Food is the eternal element of identity that characterizes different people as driving force of the world while simultaneously unites cultures, mother nature and agriculture”, explains the curator.
“Precisely nutrition with all its facets, it’s the central issue of today’s debate on sustainable development and trade of fundamental resources”.

The exhibition arrives in Brazil in its second edition; the first one took place at the Musée Ariana, in Geneva, Switzerland (2012-­‐2013), and after this presentation in Sao Paulo, the third venue will take place in Marseille, France, at the Museum of European and Mediterranean Civilizations (MuCEM), from October 2014 until February 2015.

ART for The World is a Non Governmental Organization (NGO), associated with UNDPI, (United Nations Department of Public Information). ART for The World aims to mobilize contemporary art, cinema and culture on the most relevant issues of our society. Since its foundation in 1996, ART for The World has curated large traveling exhibitions in Switzerland, Italy, France, UK, Greece, Morocco, Armenia, India and Brazil.

FOOD highlights once again the close cooperation between Sesc São Paulo and ART for The World.
For more than a decade, the institution realized several important exhibitions curated by ART for The World, such as the solo shows of Marina Abramović (2006) and Robert Wilson (2008), as well as the group exhibitions Urban Manners (2010), dedicated to contemporary Indian artists, and The Mediterranean Approach (2012-­‐2013), concerning Mediterranean cultures. Since 2008, the NGO has co-­‐produced with SESCTV twenty-­‐nine short movies by video artists and independent filmmakers linked to the Human Rights.

FOOD was initiated in collaboration with the Department of Culture and Sport of the City of Geneva and the CBH (Compagnie Bancaire Helvétique), under the patronage of EXPO Milano 2015. The exhibition has been made possible thanks to the collaboration of the institutions and collections LIMA (Amsterdam) and Raghubir Singh Succession (Paris), as well as the galleries Air de Paris (Paris), Galerie Bob van Orsouw (Zürich), Galleria Continua (San Gimignano, Italy), Galerie Lelong (Paris), Galeria Millan (Sao Paulo), Galerieofmarseille (Marseille), Magazzino d’Arte Moderna (Rome), Nature Morte (New Delhi).