The Art of Possibilities. Comprising approximately 100 exhibits the exhibition presents the diversity and history of the variable artwork. The focus lies on the 1950s-1970s, during which period concrete-constructive artists in particular confronted the topic of direct beholder involvement in the most diverse manner. 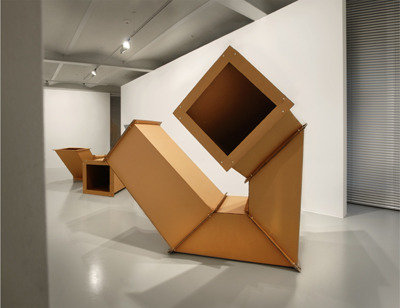 Comprising approximately 100 exhibits this special exhibition presents the diversity and history of the variable artwork. The transformable ‘play object’, which has also been described in art history as an ‘object of variation’ or a ‘participative object’, experienced its heyday, in the area of concrete-constructive and kinetic art in particular, at the end of the 1960s. During this period artists pursued the aim of getting the beholder directly involved in creating and transforming their art objects in different ways. The beholder changes the movement-based compositions of images, reliefs and sculptures and thereby chooses a configuration that pleases him or her. This turns the audience into a direct player between artist and artwork. Museum Tinguely offers the unique opportunity to experience many of the works in all their variability at first hand within a comprehensive program of more than 300 interactive public tours.

Pioneers of the Play Object
Sculptures from the 1930s and 1940s that anticipated the ‘play object’, in the form in which it became increasingly fashionable in the 1960s, will be presented in an introductory section. On show will be articulated works in wood and metal by the Argentine artists’ group MADI, led by Gyula Kosice and Carmelo Arden Quin, along with the sculpture Game, which is evidently designed to recall a board game, by the Briton William Turnbull. In addition to early works by Hugo Weber and Hans Erni, the sculpture Mobile by Le Corbusier (known chiefly as an architect) also demonstrates that Swiss artists were innovative in the field of the transformable artwork.

Concrete-constructive Play Art
The exhibition’s focus lies on the 1950s-1970s, during which period concrete-constructive artists in particular confronted the topic of direct beholder involvement in the most diverse manner, developing a broad range of techniques and utilizing various materials. On show, among others, are early dynamic reliefs by Karl Gerstner, Spielobjekte by Gerhard von Graevenitz, a large Kugelbild by Paul Talman, the Grosse Drehflügel Serie E and the Vierkantrohre Serie DW by Charlotte Posenenske. Dieter Roth began to breach constructive art’s strict rules of order right from his early works. For example, as in op-art, visual interferences are generated in the Drehrasterbild by means of rotary movements. In the Gummibandbild the visual support becomes a playing field with rows of nails running orthogonally: the user, who is able to form an infinite variety of patterns and shapes by tensing the elastic bands on the nails, becomes the artist and collaborator in an art form for everyone.

South American artists such as Carlos Cruz-Diez or Mary Vieira, who created transformable sculptures out of wood or metal, also explained their participative art in socio-political terms.
Italian artists within the Milan-based Gruppo T, among them Gianni Colombo, Gabriele Devecchi and Grazia Varisco, dealt intensively with the topics of space, time and movement.
Magnetic elements and belts can be moved on Varisco’s reliefs. In Colombo’s Superficie in variazione levers on the faux fur surface are pulled in order to create different structures.

Play Machines and Play Art for all Senses
Numerous exhibits, such as for example the Tableau tactile sonore by Yaacov Agam, appeal to various senses. A touch on the spring-mounted metal elements sets these exhibits vibrating and generating different sounds. In the Essbild by the artist Dieter Hacker, users can decide for themselves whether they want to move white chocolate buttons on a black board or would rather remove them from the ‘visual composition’ and consume them. The artists employed their highly individual concepts in reaction to their environment, to current topics in society, politics, and science. They created art objects out of everyday materials and industrially prefabricated consumer items. Rolf Glasmeier deliberately used mass-produced goods with no artistic value for his Kaufhaus-Objekte. Movable window handles or letterbox flaps can be activated by the ‘art user’ in order to realize a large number of different configurations on the image surface. The black Rotozaza No. 1 by Jean Tinguely is an enormous ball-game machine animated into play by the museum visitor. In Julio Le Parc’s Ensemble de onze jeux surprises beholders press a button in order to set off various ‘surprises’, which appeal to both their visual and auditory senses. His Jeux avec balles de ping pong makes table-tennis balls dance mechanically like a pinball machine.

New Play Objects
In the interactive installation The obliteration room by Japanese artist Yayoi Kusama the audience is invited to stick luminous colorful dots all around a living room completely painted white. Each visitor leaves behind his or her traces and, in the course of the exhibition, thousands of dots thus accumulate, coating the space in colour. Museum visitors are also playfully drawn into creating an artwork with Intervention Impact by Jeppe Hein. 300 large white cardboard cubes, with one sliced off corner, operate like a modular system: thus, a new construction is presented with each transformation and each new visitor.