Face B. Image / Autoportrait. Bringing together installations, videos and over a hundred photographs, the present exhibition reveals how aspects of the body and its transformations have nourished Ferrer's art from its earliest days. 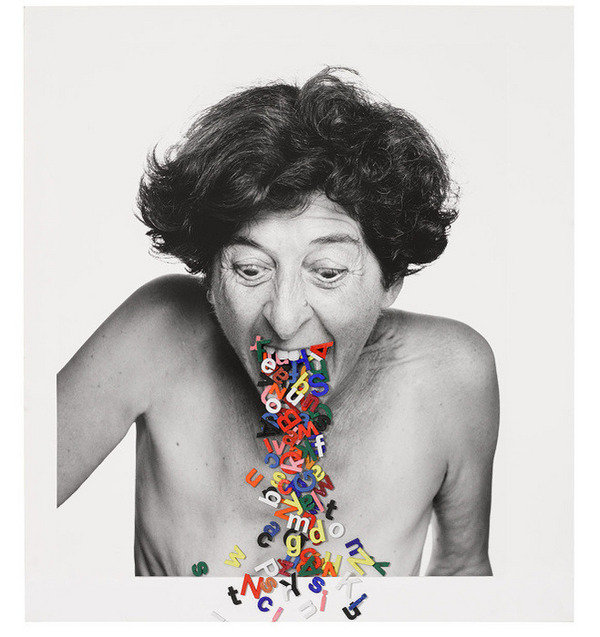 To launch the 2014 season, the MAC/VAL is honouring Esther Ferrer, pioneer of action and performance art, in a solo exhibition based on her self portraits created since the 1970s.

Bringing together installations, videos and over a hundred photographs, the present exhibition reveals how aspects of the body and its transformations have nourished Ferrer’s art from its earliest days.

This second event follows a 2013 exhibition at the Frac Bretagne1 devoted to commemorating Ferrer’s performance art.

Esther Ferrer seeks to define her own individuality, using her body as a tool for creation and expression with both simplicity and radicalism. Although she is the primary subject of her own work, her production functions as an offering of the self, a straightforward method for making and saying things without the addition of superfluous props or decor in an utter austerity and economy of means.

She stages her own body to observe the world evolve in time and space.

Hers is an art without compromise, brut, if not brutal, at times violent, but also eminently political. Although her primary purpose lies elsewhere, from the beginning, Ferrer’s art has been both social and political — before being an artist, she is a feminist, an anarchist, and a political activist.

Without imagining that she will change the world, Ferrer seeks to encourage new manners of perception and awareness among its members.

For nearly fifty years, her coherent, crafted and constant message has always been an invitation to freedom, one that remains in perfect resonance with the present.

Born in 1937 in San Sebastián, Spain, Ferrer has lived and worked in Paris since the 1970s. In 1999, she represented Spain at the Venice Biennale. In 1967, Ferrer joined ZAJ, a group founded in 1964 by Raymond Barcé, Walter Marchetti, and Juan Hidalgo. She remained a faithful member until the group’s dissolution in 1997. ZAJ came into existence under the Franco dictatorship and was influenced by the work of John Cage, Marcel Duchamp, and the Fluxus movement (although it was not truly affiliated with the latter). Its members favored radical and experimental performances in which music played an important role. Whether in collaboration with ZAJ or in her more personal activities, Esther Ferrer created a broad range of plastic work, which was nevertheless linked to ephemeral events. An emblematic figure of performance art, the medium upon which most of her work is based, she also creates reworked photographs, videos, installations, models, and objects. These works are always marked with a minimalist spirit and extreme rigor.