Home and Away and Outside. The presentation sheds light on his work's variety in terms of media, subjects, and contexts. Thematically divided into 3 sections, the show highlights the manifold nature of Rehberger's oeuvre from optical delusions and identity games to issues of transience. Curated by Matthias Ulrich. 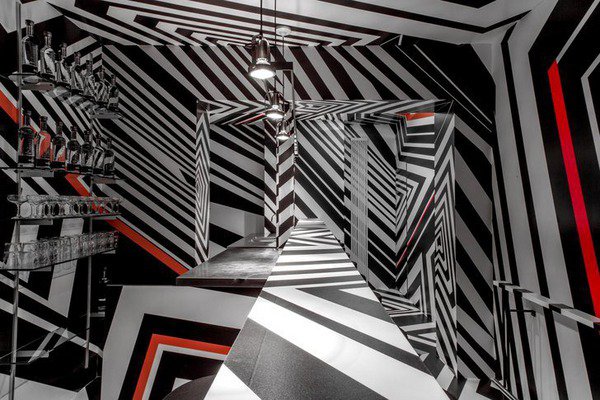 With the large-scale exhibition “Tobias Rehberger. Home and Away and Outside,” the Schirn Kunsthalle Frankfurt pays tribute to one of the most influential German artists of his generation.
Born in 1966 and living and working in Frankfurt am Main, Tobias Rehberger is internationally renowned for his trenchant and witty works. Numerous awards and exhibitions honor the artist whose complex oeuvre occupies an outstanding position within today’s art production. Showing more than sixty works, the Schirn presents Rehberger’s first major exhibition in Frankfurt from February 21 to May 11, 2014. Developed in close collaboration with him, the presentation sheds light on his work’s variety in terms of media, subjects, and contexts as well as on his development as an artist on an area of over 700 square meters. Rehberger has conceived an elaborate solution for the exhibition architecture integrating exhibits from his work of the last twenty years. The beginning is made with a continuation of his award-winning work Was du liebst, bringt dich auch zum Weinen (2009) for the 53rd Venice Biennial. The entire hall of the Schirn will be furnished with an installation whose optical flicker recalls the spirit of Op art for which Rehberger relies on the camouflage technique of dazzle painting mainly used for ships in World War I. In sharp contrast to it, the second chapter of the presentation unfolds as a completely white architectural landscape, which blurs the boundaries between platform and base, seating facility and walking area and extends across the entire West gallery. The third part of the exhibition features a new large-format sculpture developed for the freely accessible Schirn Rotunda. Thematically divided into three sections, the show highlights the manifold nature of Rehberger’s oeuvre with exceptional works from the purported design quotations of his Kamerun- und documenta-Stühle (1994) and his vases based on the originally nine-part series one (1995) to the group of works titled Fragments of their pleasant spaces (in my fashionable version) (1994/1996/2009), which resulted from a joint authorship – one of the basic themes Rehberger has dedicated himself to.

“As former student and present professor at the Städelschule, Tobias Rehberger has made a name for himself in the international arena starting from Frankfurt and ranks among the most important contemporary artists today. This is why we are particularly pleased to show this long-due survey of his work in his adoptive city,” says Max Hollein, Director of the Schirn Kunsthalle Frankfurt.

“Particularly important to me is the metaphorical elegance with which Tobias Rehberger conceives pictures of today’s social reality and unmistakably presents them as an aesthetic translation. The preparation of such a complex and comprehensive show exhibition has also challenged the artist to create a specific signature for each of the three areas, as if a different artist were responsible for each of them,” Matthias Ulrich, the curator of the exhibition, points out.

Tobias Rehberger, born in Esslingen on the Neckar River in 1966, studied with Thomas Bayrle and Martin Kippenberger at Frankfurt’s renowned Städelschule from 1987 to 1993. He has been teaching as a professor of sculpture there since 2001. He was awarded his hitherto most prestigious international prize with the Golden Lion for best artist at the 53rd Venice Biennial in 2009, which he received for a room-spanning overall installation he designed as a cafeteria for the Biennial in the Palazzo delle Esposizione and which is used as a permanent functional space. Rehberger’s works have been presented in solo exhibitions at the Leeum Samsung Museum in Seoul (2012), the Stedelijk Museum in Amsterdam (2008), the Museum Ludwig in Cologne (2008), the Centro de Arte Reina Sofía in Madrid (2005), the MCA Chicago (2000), and at other venues, as well as in numerous group and gallery shows like in New York, Tokyo, London, Paris, Milan, Rome, Brussels, Berlin, and Antwerp and are to be found in today’s most important international collections.

Tobias Rehbergerʼs work cannot be categorized as associated with a special medium or dedicated to a certain subject. Relying on a variety of media rather, the Frankfurt artist has created sculptures, installations, posters, and paintings and thus dealt with a wide range of themes spanning from optical delusions and identity games to issues of transience. It is often the genesis of a work his art focuses on: the artist frequently falls back on his own memories, draws inspiration from outdated techniques of production, or provokes his viewers by furnishing his works with alleged flaws or lending his works the appearance of copies when viewed for the first time. Many works are results of a joint authorship, works for which Tobias Rehberger relies on others’ information and ideas.

The exhibition starts with a continuation of Rehberger’s award-winning work Was du liebst, bringt dich auch zum Weinen (2009) for the 53rd Venice Biennial Biennale which, at the Schirn, is to be read as an art space and not as a functional space. Rehberger wallpapers the entire first hall along with its furnishings and a new sculpture with a dazzle camouflage graphic artwork whose pattern he designed especially for the exhibition. This pattern creates an optical flicker that merges the room and the exhibits shown there. By including further works, Rehberger’s new presentation of his well-known work enhances and changes the room’s effect. The works to be found here comprise his so-called “handicapped sculptures,” which, furnished with purported flaws, confront the viewer with an aesthetic dilemma. In addition, we find large-size mirrors from the series Kim explores her face in the broken mirror (2007/2011) or the painting Large cuckoo clock (2009), a quite pointed work in terms of both format and method of production. The round wall picture, in the shape of an unusual cuckoo clock, offers a comment on the functional ways of art. In interlinking the overlapping works, Tobias Rehberger blurs a possible hierarchy of artistic media.

While the artist’s dazzle work brings about an inundation of seeing, the second section of the exhibition is rather minimalist and surprises through its academic seriousness. Resembling an architectural model, the white scenery Tobias Rehberger developed for this section of the exhibition extends across the whole area of the West gallery and blurs the boundaries between platform and base, seating facility and walking area. Ultimately, the function of the exhibition architecture only results from the visitors’ ways of perception and use. The concentrated selection of objects with a seemingly applied or functional character reveal Rehberger’s concept of sculpture typical for his work from the 1990s on. Here, the artist deals with the frequent misunderstanding of his production as situated at the interface of art and design – a view referring to the ways in which Rehberger’s works may be used. This part of the exhibition presents the work We never work on Sundays (1994), for example, a series of chairs such as Untitled (Aalto), Untitled (Breuer) and Untitled (Judd), for which design classics of the 1920s and 1930s served as a basis. Rehberger had the chairs built by Cameroonian carpenters and artisans, who were not familiar with the originals, after sketches he had made from memory. The confrontation of European design and African artisan crafts irritates the viewer. In this case, Tobias Rehberger, who often works from his memory, plays with his personal idea of objects’ exterior and the degree of their cultural codification. While the objects do not fulfil the idea of everyday things on the one hand, they may function as such, though, and thus be understood as design on the other.

Rehberger’s architectural landscape also comprises the group of works titled Fragments of their pleasant spaces (in my fashionable version) (1996/1999/2009). At first sight, the furniture ensembles resemble dysfunctional remains of the past. The titles, however, not only tell the viewer the situation he finds himself confronted with, but also reveal that several authors have been involved. The artist uses others’ input for creating spatial situations, sometimes playing with the anthropomorphic forms and glaring colors of the 1970s, sometimes evoking the minimalism of the 1960s or relating to the seating furniture and loungers of the 1990s. The second chapter of the exhibition is rounded off by a large flight of steps, which, as a seating facility, invites visitors to explore the work Gu mo ni ma da (2006) – not in its three-dimensional shape – but in the form of a photographic wallpaper covering the whole wall. Tobias Rehberger’s work, originally measuring 4.32 x 10.4 x 3.5 meters, focuses on the family history of the artist Danh Võ, his friend and former student. Here, too, Rehberger fathoms issues of authorship, of the artist’s control, and of his genuine influence on his work by delegating the production process to others. The third part of the exhibition is to be found in the freely accessible Schirn Rotunda for which Tobias Rehberger has conceived a large-format, luminescent and lit sculpture. The work titled Regret (2014) will be installed in the glass ceiling of the building. Thematically, the sculpture belongs to the shadowing figures of the artist’s most recent phase of work. Only completed by the use of light and shadow, these works project a word in their shadow depending on the object’s position in regard to the light source; it is the shadow that may be seen as the actual work of art. A platform in the center of the Rotunda picks up the shadow and invites the visitor to linger beneath the sculpture.

The exhibition “Tobias Rehberger. Home and Away and Outside” is funded by the Kulturstiftung des Bundes and receives additional support from the SCHIRN ZEITGENOSSEN and the Georg und Franziska Speyer’sche Hochschulstiftung.