El Lissitzky - Ilya and Emilia Kabakov. More than 40 original works by Lissitzky from 1919-1930, as well as in impressive reconstructions of his models as spatial total works of art. In contrast, the installation and painted works of the Kabakov draw a picture of failed utopia reality, paired with conceptual metaphysics. 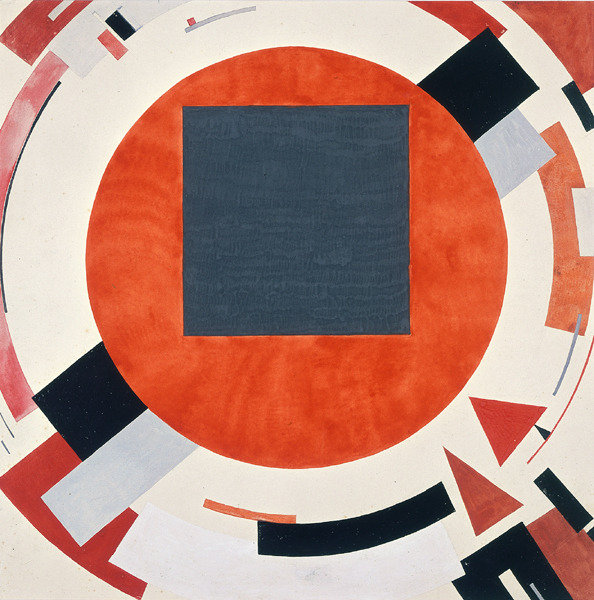 The exhibition El Lissitzky – Ilya and Emilia Kabakov. Utopia and Reality is a dialogue between two Russian artists over several generations and almost a century. Ilya Kabakov engages in a dialogue with the visionary of the Russian avant-garde, El Lissitzky, who with his designs was key in shaping the lexicon of form of a period of upheaval, placing art directly in the service of social reform. Both artists stand for two generations that followed each other, one for the implementation of communist visions – the other for its deconstruction.

On show in the Kunsthaus Graz is a version of the 2013 exhibition displayed in the Van Abbemuseum in Eindhoven (NL), adapted for Graz by Ilya and Emila Kabakov. Mostly recently it has been hosted in the State Hermitage Museum in St. Petersburg (28.06.–25.08.2013) and in the Multimedia Art Museum in Moscow (17.9.-17.11.2013). In more than 40 original works by El Lissitzky from 1919- 1930, as well as in impressive reconstructions of his models as spatial total works of art, generally comprehensible geometric forms become tangible as constructivist and at the same time political visions. In contrast, the installation and painted works of Ilya Kabakov, who has collaborated with his wife Emilia since his move to the USA, draw a picture of failed utopia reality, paired with conceptual metaphysics.

The utopian architecture of the Kunsthaus inspired the artists to a stroll through two opposing worldviews, arranged in semi-circles. Unlike in Eindhoven, where the works were organised in themes in a linear space and placed with juxtaposing work themes, universes are created in the Space01 parallel to one another, as well as a deconstructing clash of fictions, realities and time periods. The artists’ works are sub-divided into six themes, ranging from the awakening of space through to unrealised utopia, and ultimately converge in one communal, large, central room. It begins with vastness – both of the open surface and its promise of the new. From 1919, El Lissitzky with his Proun works set into motion the zero point of art in the picture as laid down by Malevich. He conceived of the image-free, utopian space for painting, as well as the new life freed from the history of what had preceded, as a focused upheaval. A great promise which, combined with the beginning of the Soviet Union, turned into a visually powerful language, the reality of which for the younger generation of Ilya Kabakov is also to turn into the threatening vacuum, into life on the margins, and into permanent doubt about the pure idea, the concept, but also about the conceptual as well. What in Lissitzky’s case bears the jubilant title of Cosmos becomes in Kabakov’s response the Voices in the Void, and gathers Kabakov’s first works, which reached the west, too: the works.

Along the Edge which place man on the periphery of vision, though depict his reality – albeit in miniature format – as breathing with difficulty, nonetheless. It is the works acquired in the 1970s by the Swiss diplomat and collector Paul Jolles that paved the way for the artist out of socialism. With Lissitzky the chapters Clarity of Forms follow, with the designs for Wolkenbügel (1925) and Victory over the Everyday among others – the vision of an ordered and optimised city life in ideal architecture and its reduced expression of movement. Kabakov responds with the chapters Garbage and Everyday’s Victory and produces works such as 16 Ropes from 1986 or the Communal Kitchen from 1991, works concerned with the phenomenon of the impossibility of escaping from the garbage of the past and from the attributions of others.

In the fourth chapter, in Monument to a Leader and Monument to a Tyrant, political leaders stand opposed to one another twice: once as an ideal to be emulated, and once as a direct danger which considers the monument and its base, as well as its metaphorical meaning too, as an intrinsic danger for fighting off man. Two rooms follow which becomes three-dimensional as human visions. With the Proun Room, El Lissitzky constructs from the pictorial space an emotional space that is conditioned only by the design of the form, which attracts, guides and moves observers. Kabakov’s The man who flew into space from his apartment (1985) confronts this as a location of a desperate eruption, and as a visually striking, constructed fantasy, as a lived, secret dream of the original Russian vision of space.

In Trust in the New World Lissitzky’s model worlds are gathered, e.g. the folder of figurines, or the model based on ‘Proun 1E – The City’ (1920-1921, construction: 2009). Kabakov responds in the chapter Unrealized Utopia with a group of models which already – and precisely as designs too, or as dreams – have their meaning; thus, for example, Palace of Projects or The Vertical Opera (both 1988). They include the public directly in the artistic process of reflection and the will to design a better world.

In the last chapter1 both artists encounter one another as Artist as Reflecting Character and as Artist as Reformer. Here too, clear affinities become evident: both were also occupied in their hearts with the graphics and have occasionally earned their living with commissions. Even though they do not conform with the system in the same way, they have both discovered in drawing the potential for merging language and form, although – as the placards, posters, books and sketch clearly show – they have employed it in as different a way for their artistic development as their history is different.

The exhibition is accompanied by an extensive catalogue, produced by the Van Abbe Museum, Eindhoven, with texts by Charles Esche, Boris Groys, Anton Vidokle, and others.

1) In Eindhoven and in the catalogue The bright Future behind us and The Bright Future Ahead follows. Both these chapters were omitted in Graz in their entirety. Individual works were included in the other chapters.

In cooperation with the Van Abbemuseum, Eindhoven (NL)