Hatch up your troubles. In the first gallery, circular Ikea doormats made out of coconut fibre are piled loosely from floor to ceiling. In the back gallery, the viewer confronts a stack formed from a more traditional and noble sculptural material. 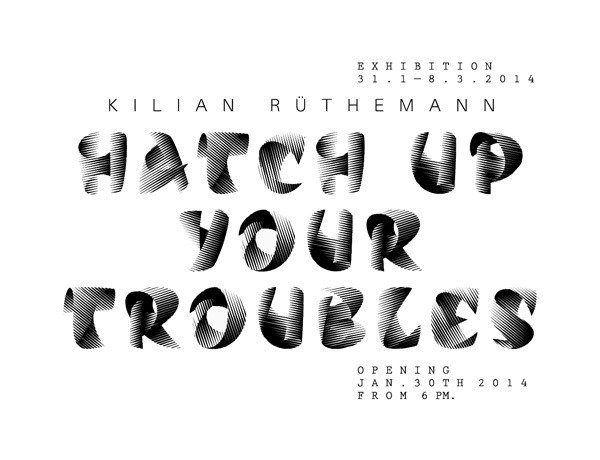 RaebervonStenglin is delighted to announce 'hatch up your troubles', Kilian Rüthemann’s second solo exhibition at the gallery that presents a new departure in the art of the young Swiss sculptor. Consisting of just three works, front and back galleries each contain 'stacks' in which innumerable versions of the same object are piled on top of one another, while joining the two spaces is a hole — the 'hatch' of the title — through which a person might conceivably crawl, mouse like, from one room into another. A perfectly geometric hemisphere, this void in the wall invites a different perspective from the viewer, signalling a logic of ideas over materials.

A cartoon reality prevails in 'hatch up your troubles' provocatively at odds with the process-based art that Rüthemann first became known for. In the first gallery, circular Ikea doormats made out of coconut fibre are piled loosely from floor to ceiling. Precariously wobbly in appearance, these modular repetitions reference not so much the regal 'stacks' of Donald Judd as an exaggerated heap of pancakes liable at any moment to collapse, an association encouraged by the nearby mouse-hole. The slackness and cheapness of each mass-produced doormat is in contrast to traditional sculptural material and a far cry from the artist's original training as a stone carver. Instead, these readymade discs — at once banal and bizarre, natural and processed — relate to a contemporary experience governed by shopping rather than making.

In the back gallery, the viewer confronts a stack formed from a more traditional and noble sculptural material. The complete trunk of a thousand year old oak tree, preserved and blackened from being buried under the earth for hundreds of years, has been thinly sliced into strips of veneer. These are placed one on top of another, just as they would be stored in a warehouse, except for the fact that the artist has placed a thick beam of wood running underneath them. In this way, the strength and heaviness of a thick tree trunk is shown to be pliable and soft, responding the shape below. As with all of Rüthemann's works, assumptions are being tested by new relationships; the viewer's expectations are considered and played with, equally subject to the artist's manipulation as the physical materials he uses.

We like to thank Bollinger Furniere AG for their kind support.