"As You Can See" is the first show of current Polish art spanning such range for more than a decade. It centres around important works, attitudes, and themes commented on by visual artists over recent years. "In the Near Future" is the exhibition of the collection includes the pieces of 48 artists - works which are deeply rooted in the here-and-now. 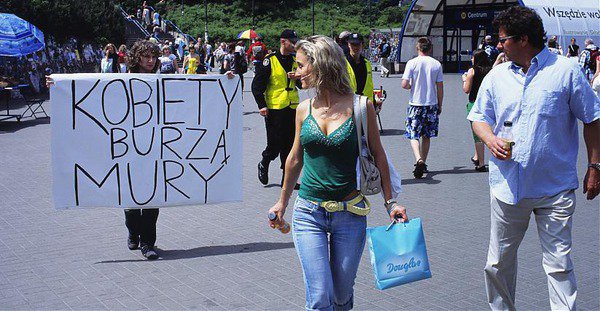 "As You Can See: Polish Art Today" is the first show of current Polish art spanning such range for more than a decade. It centres around important works, attitudes, and themes commented on by visual artists over recent years.

The curators - Sebastian Cichocki and Łukasz Ronduda - have purposely reached for the conservative format of an artistic salon, shifting the centre of gravity from exhibition experiments to artworks themselves, whilst allowing the salon itself to be particular: critical, emancipatory, psychedelic, occasionally brutal and perverse, dense and ambiguous.

The exhibition was designed as a guidebook facilitating the journey across the territory of current art phenomena. It was created with a broad audience interested in contemporary culture in mind. It focuses on a specific time and place, and is being held at a rather specific moment: several years after Polish art stabilised its position internationally, and simultaneously to the process of Polish artistic institutions becoming professionalised and rather radical. The current set of circumstances seems to be a dream come true for previous generations of artists, whose presence in the field of art often tied in with a struggle for the shape and form of the art institution, and for the artist’s position in society. The situation itself, however, does not resolve all problems: paradoxically, it leads to the creation of new tensions between institutions and artists, and artists and audiences, respectively.

The exhibition focuses on how artists define their social role and obligations to a viewer, and how they negotiate their relations with institutions. As You Can See: Polish Art Today is a review of forms of seeing and perception, of desire, of being together and being alone, of understanding reality, and of relating to the past and future. The exhibition relates both to the artists’ private space and developing relations with objects of everyday use or with architecture, and to the – ever-unconquered – territory of social change, to attempts at modifying the world with tools of art put to use.

The "As You Can See: Polish Art Today" exhibition traces the current moment in the Polish art scene by grouping artworks and art phenomena into a series of narrations. A distinctly pronounced motive is that of avant-garde strategies having been exhausted and replaced by a search for inspiration in areas which could have previously been considered “compromised”: non-professional art, crafts, or academism. “Bourgeois” art, contemporary graphics, and extra-urban art (contemporary folk art, created contrary to recent opinions that contemporary art is a purely urban phenomenon) have all been gaining new allies.

Throughout the exhibition, the Emilia pavilion shall be gazing at the city with huge eyes wide open, an object of unique anthropomorphisation (Paulina Ołowska’s glass paintings in a reference to Jerzy Kolecki’s posters). The exhibition centres around what you can see, on how you see it, and on what becomes visible through and in art.

The Collection of the Museum of Modern Art in Warsaw, systematically developed from 2010, has been started with the intention to provide access to and discuss the statements made by contemporary artists, particularly those whose works describe the social changes and the emancipatory movements in Poland after 1989.

This time, the exhibition of the collection includes the pieces of 48 artists – works which are deeply rooted in the here-and-now, and which speak with the world and about the world.

Most of the artworks shown here have been created in recent years, however for the benefit of a certain historical context, we also present examples of Polish art created after 1968 – a breakthrough year in terms of the shape of contemporaneity. Our intention is also to underline the international character of the art and culture of today. For that reason, in creating the collection of the Museum of Modern art in Warsaw, we feel strongly motivated to confront the Polish viewers with global art phenomena, particularly since the social changes of today stretch far beyond the local.

This year’s display of the Museum’s collection focuses on the change in culture that has been introduced by emancipative equality discourses which blur the traditional borders and hierarchies, in particular in terms of the notions of gender, family, religion, nation, race, or publics space. We have borrowed the title of the exhibition from a work by the American artist Sharon Hayes, who studies contemporary social movements and their aspirations of liberation. The Warsaw museum, still in the process of becoming, follows Hayes in her belief in the establishment of new ideas and practices which are, at the same time, the foundation of contemporary culture.