AV Festival 14: Extraction explores the raw materials that create our experience of the world, from their origins deep in the ground, to their extraction, transformation and global exploitation. It features 11 exhibitions and installations that run throughout the month by artists Mathieu Kleyebe Abonnenc, Lara Almarcegui, Yuri Ancarani, Salvatore Arancio, Walead Beshty, Wang Bing, Rossella Biscotti & Kevin van Braak, Harun Farocki and many more. 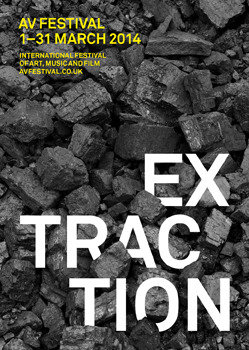 AV Festival 14: EXTRACTION presents the work of artists who are re-imagining the geologic by responding to the natural landscape of North East England and beyond, from Neolithic rock art and glacial erosion to the remnants of the coal mining and minerals industries, and modern concerns with the global exploitation of material resources. Through contemporary art, sound, music and film, the biennial event explores the raw materials that create our experience of the world, from their origins deep inside the earth, to their extraction and transformation through artistic, industrial and manufacturing processes. The curated programme features 11 exhibitions, 36 film screenings, 10 concerts, including 11 new commissions and 25 UK premieres by internationally and nationally renowned artists.

The venues include mima, Middlesbrough; Northern Gallery for Contemporary Art, Sunderland; Sage Gateshead, BALTIC Centre for Contemporary Art; Laing Art Gallery, Tyneside Cinema, Star and Shadow Cinema, Castle Keep, The Mining Institute, Embleton Bay, Dunston Staiths and other places in Newcastle and across the region. In Newcastle, the Festival is proud to present the first major solo exhibition of Akio Suzuki’s work ever shown in the UK, spanning a thirty-year period, and focusing on his concept of ‘na ge ka ke’, where he affects nature in some way and then listens to the ensuing phenonomen. His show has contemplative, apparently soundless installations that invite the ‘listener’ to engage with the ancient vibrations of nature, including a new work responding to the coastal landscape of North East England, and in particular the limestone stack of Marsden Rock.The last coal extraction and surface mining in Newcastle city centre is the focus of Lara Almarcegui’s new commission for AV Festival, which includes material from her guided tours of the coal seams recently revealed in the redevelopment of Science Central during 2013, including a large-scale metal cap from a mine shaft. Exploring time and landscape by uniting physical materials with natural elements, Jessica Warboys’ solo exhibition presents sculptural objects, a video installation and a large-scale sea painting created from mineral pigments thrown onto the canvas and then submerged in the sea and pulled across the sand.

Susan Stenger returns to AV Festival with a new sound installation inspired by the topographical nuances of a 12-metre long hand-painted scroll of the geological strata of the landscape from the River Tyne to the Scottish border, drawn by local mining engineer Nicholas Wood in the 1830s. Using the diagram as a graphic score, Stenger transforms the geologic into the sonic in a 58-minute work that travels from coal seams to porphyritic rocks, layering instrumental sounds, melodic patterns and signature patterns extracted from traditional Northumbrian culture. Rossella Biscotti & Kevin van Braak transfer existing figurative socialist sculptures into minimalist objects of the same material, weight and historic reference. This new installation for AV Festival recasts a bronze statue in Moscow of the famous Russian coal miner Alexey Stakhanov and iron statues in Vilnius of workers representing industry and construction.

For the first time, AV Festival has curated two thematic group shows; at mima in Middlesbrough Metal focuses on the material as a tool of global power and financial control, in response to the town’s role in the early development of a global iron and steel industry. Metal includes major works from Mathieu Kleyebe Abonnenc whose film installation confronts the exploitation of copper in the Congo by re-enacting the casting process in a Yorkshire foundry; Simon Starling’s gold tainted photographs, inspired by an image produced in 1913 by scientist Herbert Lang in the gold region of North East Congo offer a subtle comment on international trade; and Anja Kirschner & David Panos’ installation filmed in the Numismatic Museum in Athens and in the mining district of Lavriotiki, investigates coinage in Ancient Greece.

Stone at the Northern Gallery for Contemporary Art focuses on historic and contemporary interests in the raw material of stone, and how it has been directly shaped by human hand and culture. It includes Dennis Oppenheim’s seminal 1970 work in which he films one of his hands covering the other with rocks; Harun Farocki’s reflection on stone as container for the collective memory of a life or event; Gabriel Orozco’s video of the uninterrupted rubbing and polishing of a stone; and Yuri Ancarani’s film of the delicate hand gestures and signs used by the head quarryman amid the deafening noise of Italy’s Carrara mines. Stone also presents the hand carved geological models made by mining engineer Thomas Sopwith in the 1850s which were the first to visualise geology in three dimensions.

At Newcastle’s Mining Institute, Anna Molska’s single screen film installation re- imagines Nobel Prize winner, playwright and novelist Gerhart Johann Hauptmann’s play about the revolt of weavers in 1844 in the contemporary context of workers’ apathy in the Polish coal mining region of Silesia. Wang Bing, the key figure of a new documentary movement that has been gathering momentum in China over the last decade, presents as a gallery installation, the UK premiere of his acclaimed 14-hour film Crude Oil, following the long working day of Chinese crude oil extractors. Cinema presentations of his other films includes thethree-part, nine-hour depiction of industrial decline West of the Tracks; Man with No Name, Bing’s intimate portrait of a man living in a deserted wasteland in an unnamed part of China; Coal Money and The Ditch.

Over two weekends AV Festival presents a series of new sound commissions from artists and musicians Lee Patterson, Rhodri Davies with John Butcher, Common Objects, Richard Skelton and Chris Watson. They are responding to the region’s geology through field recordings of areas including the lead mining landscape of the North Pennines, the immense layer of igneous rock dolerite across Northumberland known as Whin Sill, and Neolithic rock art. The films of Pat Collins also feature, including Silence, a portrait of a sound recordist in pursuit of landscapes free from man-made sound, and Tim Robinson: Connemara.

The opening weekend of AV Festival 14: EXTRACTION (28 February – 2 March) includes live performances and film screenings of seminal work by Michael Snow, and new work by The Otolith Group and Jessica Warboys, plus the UK premiere of a solo performance by Akio Suzuki at the historic Castle Keep in Newcastle; and a three-hour duo performance with Aki Onda. Also premiering is a new 16mm performance by artist Bruce McClure at BALTIC Centre for Contemporary Art, inspired by Robert Smithson’s 1971 proposal for a truly underground cinema cavern. The Festival’s specially curated film weekend this year focuses on Postcolonial Cinema, exploring the complex histories and material traces of past colonial inequalities. It welcomes six international filmmakers to Newcastle to discuss their rarely seen work in person, including leading documentary figures such as Yervant Gianikian & Angela Ricci Lucchi, Gabriel Abrantes alongside artist/filmmakers Sven Augustijnen, Mathieu Kleyebe Abonnenc and Duncan Campbell. Across the whole month AV Festival curates a special programme of weekly film screenings, with a focus on documentary practice. Films exploring global depictions of extraction include existing work by Allan Sekula, Nicholas Rey and The Otolith Group plus UK premieres of: Andreas Horvath’s Earth’s Golden Playground about the new Klondike gold rush; Rachel Boynton’s Big Men which exposes the African oil industries; and Victor Lopes’ Serra Pelada - The Legend of the Gold Mountain, documenting myths around one of the largest mines of the twentieth century. AV Festival 14: EXTRACTION brings the month to an epic close at Dunston Staiths, which was built on the River Tyne in 1893 to ship coal from the local Durham coalfields to the world. Watched by an audience on boats, seminal band Test Dept return for a three-night sonic, cinematic and lighting intervention at what is reputedly Europe’s biggest wooden structure. The event creates a living monument to the historic struggles of British miners, and marks the 30th anniversary of the 1984/85 Miners’ Strike. AV Festival is a biennial festival that had its first edition in 2003. Since then it has developed to become a significant international event. The Festival became a month- long event in 2012 with the critically acclaimed AV Festival 12: AS SLOW AS POSSIBLE.