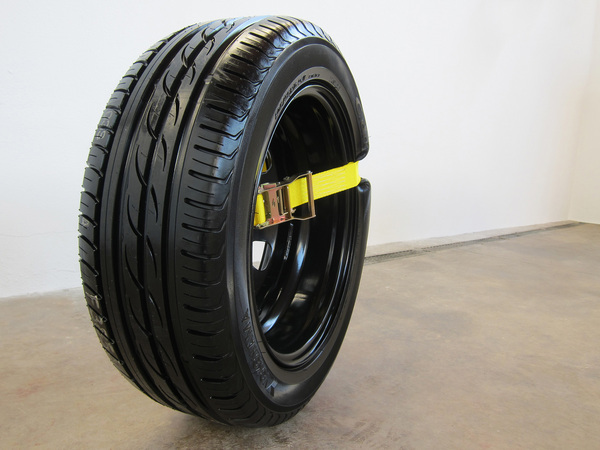 Galerie Rolando Anselmi is pleased to present the first chapter of an on-going project: About Sculpture. This project will evolve throughout the year, with four group exhibitions exploring contemporary sculpture.
The artistic relevance of this medium will be examined through the work of 24 international artists, six at a time, born between the 60s and the 80s. The artists included in the exhibitions, ranging from established to emerging, are invited to present one piece, trying to expand and go beyond conventional debates and notions of sculpture.
Their works reflect a multi-layered and contradictory image of common media definitions through the implementation of different strategies of investigation and aesthetic parameters.

This on-going project will be crowned by the publication of a comprehensive catalogue at the end of the year. In this first occasion we are excited to host works by Arcangelo Sassolino, Morgane Tschiember, Wilfredo Prieto, Cajsa von Zeipel, Tony Matelli, Davina Semo.
The show aims to build a narrative in space, investigating the relationship between space and material in an effort to exhibit a heterogeneous spectrum of possibilities.

The New York-based artist Davina Semo creates brutal abstractions deeply rooted in the physical but at the same time leaves space to more intimate interventions. In the work, presented at Galerie Rolando Anselmi, The child was trying to behave properly, but this seemed to be contradicted by the dark restlessness in her eyes (2012), three concrete slabs with transferred spray paint, and small various inclusions such tempered glass, mirrors and a necklace, stand against the wall.

On the opposite wall Cajsa von Zeipel, familiar with sculptures that carry references to both fashion and teen culture, shows seven pieces of white underwear realized in a gypsum-based material with acrylic resin. Von Zeipel's Monday, Tuesday, Wednesday, Thursday, Friday, Saturday, Sunday (2012) reveals an aesthetic that is simultaneously appealing and disturbing, questioning female sexuality and the role of popular culture in the construction of gender identities.

The hyper realistic cast bronze by Tony Matelli, Weed 71-08 (2008), depicts a withering bush. It is a moment of transition, which is frozen in the delicate and crafted object bearing an intrusive power, open to metaphor and allegorical expressiveness.

In the main exhibition room we encounter huge steel mesh tubes, dripped with oil and water based paints, created by Morgane Tschiember (Rolls, 2012). With this recently initiated series, the artist uses paint and sculpture within an artistic process that challenges material forms and explores the space between cohesion and opposition.

On the other hand, Arcangelo Sassolino's work, focuses on the interaction between different forces and materials, often of an industrial or mechanical nature. On this occasion the artist presents I.U.B.P. (2013) a glittering tyre squeezed with a yellow belt, exercising an extreme force on the rubber. Here the physical compression is visible and almost unbearable, the tension is high and the result is catching both in terms of its sheer physicality and the state of tension and anxiety that raises.

Ultimately, a stone lying on the floor on a large blood puddle, Piedra con Sangre (2011), with its strong visual impact, reinforced by the literary clarity of the title, exemplifies the powerful narrative of Cuban artist Wilfredo Prieto. In this work we can perceive Prieto's conceptual strength and the brevity of his wit, both essential aspects of his artistic practice.