Twin visions. Jerome Witkin is a painter cited by many critics and curators as the finest figurative artist working today, and Joel-Peter Witkin is equally regarded as a master of his genre-a groundbreaking photographer famous for masterfully conjuring his uniquely surreal images. 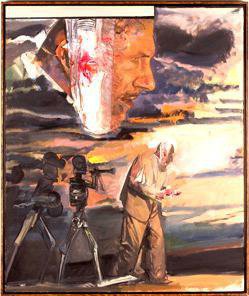 Jack Rutberg Fine Arts in Los Angeles will present an historic first in its exhibition entitled “Twin Visions: Jerome Witkin & Joel-Peter Witkin,” uniting for the first time the two internationally celebrated artists – identical twins – in this much anticipated exhibition. “Twin Visions” will open with an evening reception on Saturday, March 1, from 6:00 to 9:00 pm with both artists in attendance. The exhibition will extend through May 3.

Jerome Witkin and Joel-Peter Witkin are acknowledged as two of the greatest contemporary artists in their respective genres: Jerome Witkin is a painter cited by many critics and curators as the finest figurative artist working today, and Joel- Peter Witkin is equally regarded as a master of his genre – a groundbreaking photographer famous for masterfully conjuring his uniquely surreal images. These identical twin brothers, who have enjoyed remarkable success over their respective careers spanning more than fifty years, have never exhibited together. Until now.

“Twin Visions: Jerome Witkin & Joel-Peter Witkin” brings to light two outstanding contemporary artists whose psychological studies and complex tableaus place them among the great heroic artistic traditions by depicting themes that are at once historic, personal and deeply psychological. The common threads in their work are as distinctive as are their differences and individuality.
This exhibition represents an historic first, as both artists have famously been artistically estranged throughout their careers. The exhibition brings forth not only the unique talents of two distinctive artists - both having near cult-like admiration of their peers - but also calls into question the notions of their shared and disparate visions and even perhaps the notion of genetic pre-disposition to creativity. While history has been populated with great numbers of artistic families - Marcel Duchamp’s siblings Jacques Villon, Raymond Duchamp-Villon and Suzanne Duchamp come to mind, as do art- dynastic families going back centuries like the four generations of Bruegels in the 16th century, and before them, Lucas Cranach and Hans Holbein and their sons - Jerome Witkin and Joel-Peter Witkin stand in contrast as identical twins as they have simultaneously achieved significant recognition, while evolving apart, creating among the most provocative and distinctive bodies of work in contemporary art.

The exhibition will include some forty works spanning more than three decades including both artists’ most recent works. Iconic photographs by Joel-Peter Witkin include “Olympia” 1974, and “Las Meninas” 1987, among his small and large scale works. Jerome Witkin’s masterful large painting “The German Girl” 1997 will be among his works shown in this exhibition, joined by two monumental early drawings of the mid 80s, ruminating on a mythologized Van Gogh and his most recent paintings reflecting on Van Gogh as archetype.
Joel-Peter Witkin is renowned as the creator of elaborately staged and often erotically charged scenes exploring grand themes of religion, sex and mortality. His provocative imagery is frequently populated by social outcasts, dwarves, persons with extraordinary physical attributes and deformities, hermaphrodites, and other ‘outsiders’ and has created a sensation since early in his career in the 1960s and particularly in museum exhibitions in the early 80s at the Stedelijk in Amsterdam and San Francisco Museum of Modern Art. He was afforded a retrospective survey at the Guggenheim Museum in 1995. Recent major exhibitions include the Bibliotheque Nationale in Paris, and the Bibloteca Nacional de Chile, Santiago. His work is also the subject of twenty seven publications, and a documentary film “An Objective Eye”.

Critically, his riveting works elicit controversial and dramatic response, well typified by critic Grace Glueck’s 2006 New York Times review where she states: “The calculated madness of Joel-Peter Witkin's photographs conveys a sense of 19th-century horror, like the dreamworks of the Symbolist painter Gustave Moreau... there's a master of surrealistic photography at work.”His photographs are in the permanent collections of the National Gallery, MOMA, The Metropolitan Museum, the Getty, Victoria and Albert Museum, Centre Georges Pompidou, among many others. Among his numerous awards, he was the recipient of the Commandeur d’Ordre des Arts et des Lettres de France in 2000.

Jerome Witkin has been drawn to paint since childhood. The recipient of many prizes, including two Ford Foundation Grants, a Guggenheim, and a Pulitzer Fellowship, his masterful draftsmanship and virtuoso painting have elicited a cult following among his fellow artists. He has been the subject of myriad exhibitions, most recently a touring museum retrospective originating in 2011, celebrating his forty years at Syracuse University. His paintings, often on a grand scale, have been cited by many as being among the great narratives in contemporary art, dealing with apocryphal events such as the Holocaust and 9/11. Critically, Jerome Witkin has been likened to Lucien Freud, Manet, Ingres, and Goya for both his technical mastery and psychological insight. The Los Angeles Times hailed Witkin as an “indelible, pungent force,” and cited his work as “. . . a breakthrough in post-Cold-War art.” Art in America notes his “...Action-Painting technique, tour-de-force draftsmanship and emotionally loaded narration.” Art historian Donald Kuspit called Witkin’s works “dreams in the grand visionary manner of the Old Masters . . . painted with the rhapsodic abandon of pure sensation . . . unequivocal masterpieces.” Art critic Kenneth Baker declared: “Witkin’s only peer is Lucien Freud.” His works are in the permanent collection of museums internationally, including the Uffizi Gallery in Florence, The Fine Arts Museums of San Francisco, the Hirshhorn Museum in Washington, D.C., Metropolitan Museum of Art in New York and numerous institutions throughout America.

Opening 1st March from 6 to 9pm