Language Arts. Original works in Persian, Russian, Turkish, Georgian and English. A new series of sculptures, installations, textiles and printed matter address a range of subjects: from name changes, in Love Me Love Me Not, to the orality of language, with Rahle' for Richard. 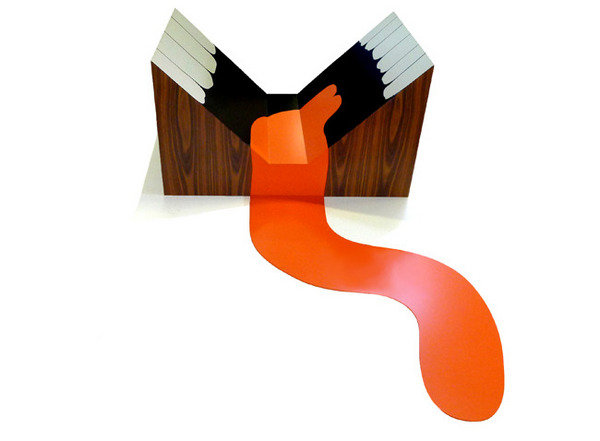 The Third Line is pleased to present Language Arts, Slavs and Tatars’ first solo show in the Middle East. Following a run of internationally acclaimed museum shows and publications, the artists’ performative use of language takes a new turn, with an exploration of alphabet politics.

Slavs and Tatars’ recent work turns to language as a source of political, metaphysical, even sexual emancipation. With their trademark mix of high and low registers, ribald humor and esoteric discourse, the collective addresses the thorny issue of alphabet politics and attempts by nations, cultures, and ideologies to ascribe a specific set of letters to a given language.

The march of alphabets has always accompanied that of empires and religions: Latin script along with the Roman Catholic faith; Arabic with Islam and the Caliphate; as well as Cyrillic with Orthodox Christianity, and subsequently the USSR. Within this body of work, it is not peoples or nations that are liberated, but rather phonemes, from attempts to restrain and rein them in.

Language Arts celebrates language in all its polyphonic glory, with original works in Persian, Russian, Turkish, Georgian and English. A new series of sculptures, installations, textiles and printed matter address a range of subjects: from name changes, in Love Me Love Me Not, to the orality of language, with Rahlé for Richard. The Trannie Tease vacuum forms present transliteration ­– the conversion of scripts ­–as the linguistic equivalent of transvestism: a strategy equally of resistance and research in notions of identity politics, colonialism, and liturgical reform. The Love Letters carpets address the issue of manipulation of alphabets across Arabic, Latin and Cyrillic, through the Russian Revolution’s most well-known, if conflicted, poet-champion, Vladimir Mayakovsky.

Slavs and Tatars often collide those things considered opposites, or incompatible — be it Islam and Communism, metaphysics and humor, or pop culture and geopolitics. From their first publication Kidnapping Mountains (Book Works, 2009) to the more recent Khhhhhhh (Mousse/Moravian Gallery 2012), the collective has consistently turned to language as a tool for disruption, humor, and unexpected meaning. By challenging an understanding of language as exclusively rational or semantic, Slavs and Tatars emphasize its potential to be affective and sensual, concealing as much as it reveals; even becoming a platform for sacred wisdom, rather than a mere vehicle for secular knowledge or profane, everyday use.

The Third Line show will open parallel to Marker, the artists’ curatorial début, focused on Central Asia and the Caucasus, at Art Dubai.