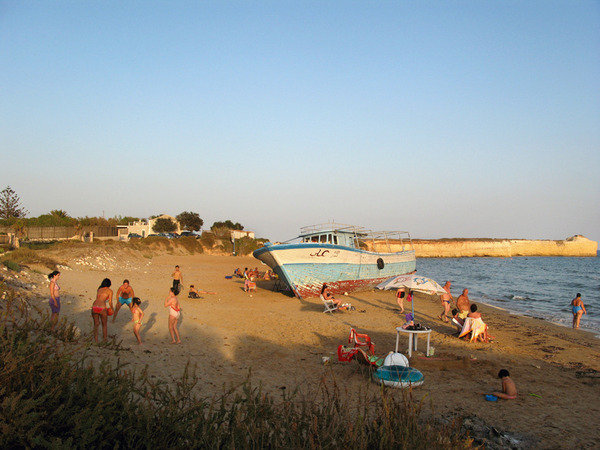 Neil Armstrong planting the American flag on the moon; the destruction of the Berlin Wall; planes hitting the World Trade Center in New York; and so on. These images have come to encapsulate, indeed to stand in for, larger and more complex global, historical processes. In their capture, and their subsequent elevation to symbolic representations, much is lost. Alternative images were either snapped and discarded or never captured in the first place. It is to these surrounding scenes that this exhibition is devoted.

Examining a central problematic of the contemporary moment—the dialectic of unprecedented media saturation and the inability to see—every work in the show sidelines a primary media spectacle, capturing instead images unlike those prevalently seen. The viewing experience is thereby situated between what has been overexposed and that which is underrepresented, between what is in the room and what is not.

In accumulation, these alter-images serve to rupture common modes of depiction; problematize the assumption that seeing images of horror leads to awareness; and question why and how certain images come to occupy a primary cultural position. The camera, known for its centering capacities, shifts its attention and, in so doing, simultaneously insists on the documentary image’s potential to reveal all that is hiding in plain sight.

Works in the Exhibition

Bani Abidi’s RESERVED, 2006, depicts the moments and events surrounding a state dignitary’s visit. Registering only the surrounding commotion (road blocks, school children in formation, reserved seating, etc.), the work ponders the inscription of power on civic space, even when the figure of authority is absent.

Khaled Barakeh’s, Transparent Truth, 2014, uses Smack Mellon’s glass enclosure to illuminate newspaper clippings, thus collapsing the front and the back of the page into one image that simultaneously reveals and obscures the callous juxtaposition of images in the news.

For Remesas, Sending Money Back, Archive, 2003–current, Carla Herrera-Prats has continuously documented establishments used by migrant workers to send money home to their communities. Riffing on Ed Ruscha’s photographs of Sunset Boulevard, these storefronts tellingly fail to signify, offering a parallel to the inadequate representation of human bonds by global financial flows.

Alfredo Jaar’s Real Pictures, 1995, is a material investigation of the photography of trauma, while also serving as an indictment of the indifference with which such evidence is often met. Traveling to Rwanda shortly after the genocide, Jaar took hundreds of photographs. Resisting the facile mediation of the act of witnessing, his photographs are placed in closed archival boxes upon which descriptions of their contents are inscribed, emphasizing the fissure that separates seeing from knowing, looking from acting.

In Waterline and Viewing Platform, 2002, Pia Lindman positions her camera at the margins of the World Trade Center site (above the adjacent viewing platform and below the surface of the Hudson River). In so doing, we notice what lies just beyond the frame of common depictions of this national monument: a tourist attraction and a hub of finance capital.

Offering a meditation on the relationship of visibility to invisibility, Maria D. Rapicavoli counters Hollywood’s dramatic renderings of her native Sicily, instead showing three realities of the place: the bureaucracy of Mafia trials; the leftover vessels used by refugees attempting to cross the Mediterranean; and a massive satellite control system, enabling enhanced long-distance communication with drones, recently installed by the US government there.

Bruno Serralongue’s working methodology involves traveling to a destination without an official assignment or press pass, carefully positioning his camera in relation to those of press photographers. For Series Kosovo, 2003–current, he repeatedly traveled to Kosovo, a place saturated with photographers over a decade ago, now absented of media interest.

In Liselot van der Heijden’s Les Uns et Les Autres, 2011, we see a protagonist who in turn sees the Occupy Wall Street protests, thereby relating looking in the gallery space to the observation of political events. The artist’s second piece in the show, Imagine, 2008–2013, reflects on the spectacle of violence, while simultaneously providing a utopian retraction as the bullet is returned to the barrel of the gun.

The Otolith Group, The Radiant, 2012
Screening of The Otolith Group’s The Radiant on April 3, at 7:30pm
Revisiting the historical hope in nuclear power as well as the devastation of cities and villages in the wake of the 2011 Fukushima disaster, The Radiant is a film essay that explores the unseen nature of nuclear energy and the problems posed when attempting to represent it.

This exhibition is supported, in part, by public funds from the New York City Department of Cultural Affairs, in partnership with the City Council, New York City Council Member Stephen Levin, and the New York State Council on the Arts with the support of Governor Andrew Cuomo and the New York State Legislature, and with generous support from The Andy Warhol Foundation for the Visual Arts and Smack Mellon’s Members. Generous support for Bruno Serralongue’s participation in the exhibition has been provided by Air de Paris.

Space for Smack Mellon’s programs is generously provided by the Walentas family and Two Trees Management.

Screening of The Otolith Group’s The Radiant on Thursday, April 3 at 7:30pm