Compositions. The exhibition comprises some 65 photographs, including the portfolio published in 1974, as well as documents and historical publications from the holdings of the Ann and Jurgen Wilde Foundation. The emphasis in the exhibition has been placed on the artist's compositions using mirrors and her photo-montages. 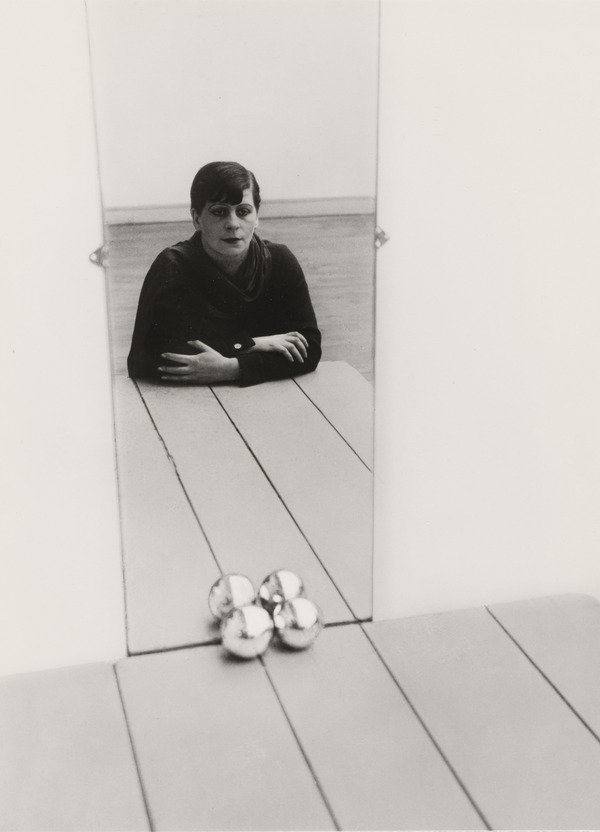 The photographs and photo-montages of Florence Henri (1893–1982) attest to her broad artistic education and an unusual openness for new currents in the art of the time.

The artist, who had studied the piano under Ferruccio Busoni in Rome and painting in Paris under Fernand Léger, in Berlin under Johann Walter-Kurau and in Munich under Hans Hofmann, spent a brief semester as a guest at the Bauhaus in Dessau in 1927.

Although photography was not part of the curriculum at the Bauhaus at this time, lecturers such as László Moholy-Nagy and Georg Muche, as well as pupils including Walter Funkat and Edmund Collein experimented intensively with this medium. It was here that Florence Henri gained the inspiration to become a photographer herself.

That same year she returned to Paris, stopped painting and devoted herself thoroughly to photography. She created extensive series of still lifes and portrait and self-portrait compositions, in which the artist divided up the pictorial space using mirrors and reflective spheres, expanding it structurally. The fragmented images created this way point to the inspiration Florence Henri gained from Cubist and Constructivist pictorial concepts.

Through her experimental photography Florence Henri swiftly became a highly respected exponent of modern photography and participated in numerous international shows such as the trailblazing Werkbund exhibition ‘Film und Foto’ in 1929. After World War II, however, the artist no longer pursued her photographic interest with the same intensity as before, devoting herself instead almost exclusively to painting. This most certainly also contributed to her photographs largely falling into oblivion after 1945.

The emphasis in the exhibition ‘Florence Henri. Compositions’ in the Pinakothek der Moderne has been placed on the artist’s compositions using mirrors and her photo-montages, It comprises some 65 photographs, including the portfolio published in 1974, as well as documents and historical publications from the holdings of the Ann and Jürgen Wilde Foundation.As such, Ann and Jürgen Wilde significantly contributed towards the rediscovery of this exceptional artist’s work. Her photographic œuvre now has a permanent place within the art of the avant-garde.

The exhibition and accompanying magazine do not only bring the important work of a keen experimental photographer to the focus of public attention, but also offer an insight into the high-quality collection that Ann and Jürgen Wilde have assembled over the past forty years, as a result of their extensive research and tireless commitment to Florence Henri.

The magazine, that includes an interview with Ann and Jürgen Wilde and a list of works by Florene Henri, among other contributions, is the second in a series of publications that began with ‘Die neue Wirklichkeit’ in 2011 and which, over the years to come, will focus on other exceptional holdings from the Foundation.