"Wonderland" by Halil Altindere documents the anger and frustration of a group of youths from the Sulukule neighborhood of Istanbul. "Taster's Choice" highlights three emerging artists and one artist collective who regard choice as both the process and content of their work. Musician James Ferraro presents new works composed for specific sites within the infrastructure of PS1. GCC group makes use of ministerial language and celebratory rituals associated with the Arabian Gulf to create videos, photographs, sculptures, and installations. 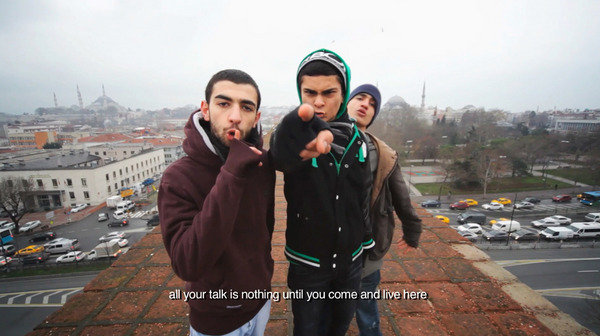 Since the mid-1990s, Halil Altindere (Turkish, b. 1971) has emerged as one of the most prominent contemporary artists in Turkey with a multifaceted practice that ranges from video, sculpture, photography, installation, and performance to collaborative editorial and curatorial projects. His work examines the systems of power deeply embedded in Turkish culture with poignant reflections on broader questions of belief, belonging, alienation, and resistance.

Wonderland (2013) documents the anger and frustration of a group of youths from the Sulukule neighborhood of Istanbul, a historic area home to Romani communities since the Byzantine Empire that has been increasingly demolished since 2006 as part of an “urban renewal” development project. Presented in the style of music video, Wonderland captures the young men of the hip-hop group Tahribad-ı isyan, rapping about inequality and gentrification as they are simultaneously confronted by the police.

From 1967 to 1968, Richard Serra made a drawing that enumerated 84 verbs, among other parts of speech, to describe ways to create sculpture. His drawing,Verb List, makes explicit the actions that were primary to Serra’s early works, such as “to roll,” “to lift,” “to split.” Today, some emerging artists make use of a verb that was not on that seminal list: “to choose.” For these artists, the act of selection allows them to engage with material abundance, and serves as a key mode of production and communication.

Taster’s Choice highlights three emerging artists and one artist collective who regard choice as both the process and content of their work. They recognize what specific materials can convey: the intentionally neutral effect of brown industrial carpeting, or the aspirational nature of stainless-steel kitchen appliances. Juxtaposing materials and images, and filtering them for specific themes, the artists allude to emotional connections between individuals and objects, amplifying, distorting, and confusing the meanings that their choices suggest.

Recently, social and monetary value has been placed on the “curated lifestyle” and algorithms that predict a consumer’s predilections. Whether it is a person or computer that makes recommendations, such guides and tools have assumed increasing importance in an era of big data. Methods of pre-selection are marketed not only for their utility but are bundled with the promise of expression. Choosing offers a way to speak to others, a manner of communication that lies at the intersection of communal consensus and individual regard. It allows an individual to convey qualities, desires, or aspirations that foster affinities with certain groups and distance from others.

BFFA3AE (Daniel Chew, Micaela Durand, Matthew Gaffney; founded 2007) began as an Internet surf-club blog named after the shorthand for “best friends forever and ever and ever.” Working online and in physical space, the collective creates performances, videos, and sculptures that examine how the Internet has influenced social norms and mass culture, particularly the lifestyles of teens and adolescents. For Taster’s Choice, BFFA3AE presents a new film and a series of sculptures examining excess, desire, and teen culture.

Zak Kitnick (American, b. 1984) creates sculptures utilizing products instead of materials. Interested in the inefficiency between our expectations for an object and an object’s potential, he repurposes industrial products and procedures. ForTaster’s Choice, Kitnick debuts a new series of work that address the aesthetics and taxonomies of Hamilton Beach kitchen appliances. Kitnick appropriates images and graphics from the packaging of these small appliances, processing and printing the information on transparent substrates. A central concern of the work is the porous boundary between art, décor, and utility. For the artist, buying can be making—selection becomes the primary method of production—yet the products are often marked by their absence.

Nancy Lupo (American, b. 1983) highlights the emotional associations elicited by objects and materials. Her sculptures often have intentionally ambiguous forms that draw directly from quotidian life and yet pervert such notions of the everyday. From some vantage points, Lupo’s floor-based works behave as small-scaled furniture— while from other views, they appear as organic abstractions. Other pieces disrupt known forms like Rubbermaid Brute containers or heart-shaped ice cube trays. Lupo juxtaposes content and form to produce disquieting works, especially by incorporating non-traditional materials like quinoa, chia seeds, nutritional yeast, and kitty litter into her sculptures. For this exhibition, Lupo presents new sculptures that have a relationship to architecture and feature surfaces consisting of ancient grains and modified nutritional substances.

Chris Wiley (American, b. 1981) has made photographs that depict vernacular architecture, particularly in the Los Angeles area. His latest series, titled Dingbats, emphasizes the physical qualities of the images by framing them in discordant materials like industrial carpeting, stucco, and vinyl flooring. Wiley draws connections between image and object while maintaining the seemingly arbitrary nature of the conflations.

Musician James Ferraro presents new works composed for specific sites within the infrastructure of MoMA PS1. For Ferraro, hotel lounge playlists, elevator music, and ringtones have become psychological and architectural components to the space of commerce and daily life. Such audio helps smooth the interactions between people, and between individuals and computer systems. 100% examines automated systems in order to highlight moments when such systems fail or malfunction, interrupting the flow of communication and capital. The exhibition is comprised of three works: Saint Prius (2014), a composition Ferraro made as hold music for MoMA PS1’s phone system; Dubai Dream Tone (2014), a work created for the museum’s elevator; and Eco – Savage Suite (2014), a suite of ringtones exhibited on a special page of the museum’s website that are free for download.

The music of 100% alludes to the sonic backdrop of the 21st-century global city. Ferraro’s compositions speak to urban sound that is fragmented and abbreviated, designed to be on continuous loop and fill space without becoming intrusive. Speaking of the project and its inspirations, Ferraro says, “Stylistically, 100%sounds fake, ethno-ambiguous, New Age, plastic, and readymade. It’s like a fake indoor rain forest in Dubai’s international airport with the most advanced systems to create sustainable ecologies and habitats; or the empty utopian soundscape of a luxury tract house community. Global liquidity and consumption push forward in an infrastructure of automation. Dissonance sometimes occurs in the form of the glitches. These malfunction errors and random glitches are abstract symptoms of the ecological by-products stemming from global activity and the emergent cultural images that are encoded therein. It is a Great Pacific Garbage Patch of information and the cultural by-product. And for me this says something about the relationship between consumer fatigue from rapid frictionless information and infinite excess.”

James Ferraro (American, b. 1988) has release numerous albums including Far Side Virtual, which was selected as Album of the Year by Wire magazine in 2011. He most recently issued the album NYC, Hell 3:00 AM in fall 2013. Ferraro was a former member of the two-person group, The Skaters, and is currently a member of Bodyguard. Ferraro lives and works in Los Angeles and New York.

The exhibition is made possible by Matthew McNulty.

Consisting of a “delegation” of nine artists, the GCC makes reference to the English abbreviation of the Gulf Cooperation Council, an economic and political consortium of Arabian Gulf nations. Founded in the VIP lounge of Art Dubai in 2013, the GCC makes use of ministerial language and celebratory rituals associated with the Gulf to create videos, photographs, sculptures, and installations that examine the region’s rapid transformation in recent decades.

This exhibition, their first in the US, is presented in the format of a retrospective. The exhibition’s title, Achievements in Retrospective, intentionally plays with the idiosyncratic grammar reflected in bureaucratic Arabic-English translations as well as the kind of international English pervasive at global summits. As a retrospective for a nascent collaborative, the exhibition offers a prospective view, alluding to works that have yet to be made—not unlike the aspirational nature of some projects in the Gulf.

By intentionally focusing on contemporary Gulf culture, the collective seeks, in their own words, to “excavate the undocumented culture” of the region. They make use of the images and objects that circulate in social and political spheres to examine Gulf culture as it unfolds in the present day. The particulars of office environments, markers of achievement, and ceremonial acts become the raw material from which the GCC creates work addressing the very content it employs. Through the guise of an inter-governmental body, the GCC investigates notions of regional and national identity by sharing their achievements with the rest of the world.

The exhibition is made possible by The Contemporary Arts Council of The Museum of Modern Art.