Mother. An exhibition of new color photographs. Her images display an intimacy that can be startling. She has always photographed the substance of daily life. 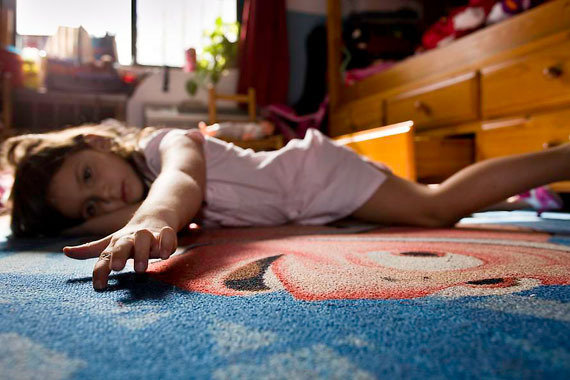 Edwynn Houk Gallery will present an exhibition of new color photographs by Elinor Carucci (Israeli, b. 1971), from the artist’s newest series, Mother, from March 27-May 3, 2014. There will be an opening reception and book signing with the artist on Thursday, March 27th, from 6-8pm.

The Israeli-born photographer Elinor Carucci made her name by training a lens on herself and her husband, parents, and siblings—a theme first brought to public attention with her monograph Closer. The body of work featured in this forceful new series began approximately a decade ago, when she was pregnant with her now nine-year-old twins, Eden and Emmanuelle. She has always photographed the substance of daily life, and this work is no exception, inviting us to participate in the most tender interactions between a mother and her children. From candid depictions of pregnancy to captivating images of her son and daughter at rest and at play, Carucci’s photographs display an intimacy that can be startling. Yet the emotions they reveal are universal, familiar to anyone who has experienced parenthood or spends time with young children. She records her family’s routines and crises with profound honesty: an infant’s fragility; fleeting childhood pleasures; a parent’s hollow-eyed fatigue; tears, runny noses, and scars. The drama of these domestic scenes is heightened by Carucci’s nuanced use of chiaroscuro, direct light, and extreme close-ups.

Elinor Carucci was born in 1971 in Jerusalem, Israel, and moved to New York City in 1995. Her solo shows include the Edwynn Houk Gallery (New York), the Sasha Wolf Gallery (New York), and Gagosian Gallery (London), and her group shows include The Museum of Modern Art (New York) and The Photographers' Gallery (London). Her photographs are included in the collections of such institutions as the Museum of Modern Art (New York), the Brooklyn Museum, and the Houston Museum of Fine Arts, and her work has also appeared in The New Yorker, New York Magazine, W, Aperture, ARTnews, and The New York Times Magazine. She was awarded the International Center of Photography's Infinity Award for Young Photographers in 2001, the Guggenheim Fellowship in 2002, and the New York Foundation for the Arts Fellowship in 2012. Carucci has published two monographs, Closer (2002) and Diary of a Dancer (2005). Carucci currently teaches at the graduate program of the School of Visual Arts.

The newest monograph, Mother, published by Prestel, with a Foreward written by Francine Prose, was on the New York Times list of 10 Best Photo Books of the Year, and on the Los Angeles Times Photo Book Roundup of the 5 Best Photography Books of 2013.