"When the Stars Begin to Fall" looks at the influence of self-taught artists on defining what black art can be. "Glenn Kaino: 19.83" features two major recent works. "Draped Down" explores the ways in which feminine beauty is constructed and interpreted. For the installment of "Harlem Postcards", Ivan Forde, Laura Linda Miller, Paul Mpagi Sepuya and Cauleen Smith participate in one of the Museum's signature projects. 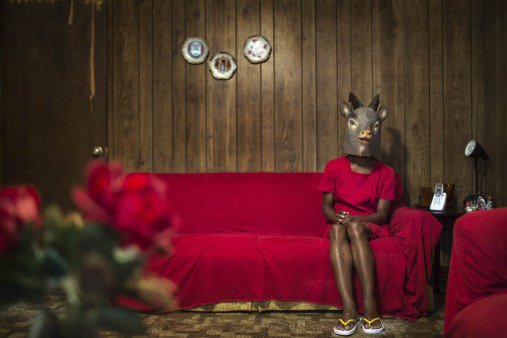 NEW YORK, NY, February 10, 2014—This spring, The Studio Museum in Harlem debuts a slate of exhibitions and projects that challenge the boundaries of contemporary art practice and exhibition. Featuring more than fifty artists, championing collaboration and encompassing meditations on geography, history, fashion, sports and more, this season’s exhibitions promise to engage and inspire diverse audiences.

When the Stars Begin to Fall: Imagination and the American South looks at the influence of self-taught artists on defining what black art can be, as well as the cultural significance of the American South as a geographic location and a conceptual frame. Including work by thirty-five artists who challenge the boundaries between self-taught, academically trained, religiously inspired and secular categorizations, When the Stars begin to Fall brings together work often displayed and considered separately. The exhibition Glenn Kaino: 19.83 takes its title from runner Tommie Smith’sgold medal–winning time in the men’s 200-meter race at the 1968 Olympic Games in Mexico City.

The show features two major recent works that are part of an ongoing collaboration between Kaino and Smith. This project mines the impact of Smith’s iconic protest during that medal ceremony in 1968 and, more broadly, the process through which a powerful historical moment becomes a symbol etched as a shared collective memory. Draped Down, the latest in the Studio Museum’s ongoing series of focused presentations of work from the permanent collection, explores the ways in which feminine beauty is constructed and interpreted. For the spring 2014 installment of Harlem Postcards, Ivan Forde, Laura Linda Miller, Paul Mpagi Sepuya and Cauleen Smith participate in one of the Museum’s signature projects, which invites contemporary artists of diverse backgrounds to share their reflections on Harlem. Also on view is Carrie Mae Weems: The Museum Series, which presents an intimate look at an ongoing series that the celebrated artist began in 2006.

When the Stars Begin to Fall: Imagination and the American South

When the Stars Begin to Fall: Imagination and the American South queries the category of “outsider” art in relation to contemporary art and black life. The exhibition includes thirty-five intergenerational American artists—ranging from Minnie Evans (1892–1987) to current Studio Museum artist in residence Kevin Beasley (b. 1986)—who share an interest in the U.S. South as a location both real and imagined. Situating itself within current art historical and political debates, When the Stars Begin to Fall considers work by self-taught, spiritually inspired and incarcerated artists, many of whom are showing at the Studio Museum for the first time, as well as by some of the best-known artists of African descent working today. Inserting a gutbucket-funky aesthetic into classical, sometimes overwrought, tropes of African Americana—the folk, the downhome, the hailed—When the Stars Begin to Fall presents narratives of racial authenticity alongside forms of abstraction, embracing the role of experimentation in an ongoing discourse about black aesthetics.

Working in diverse media including painting, drawing, sculpture, assemblage, performance and social practice, the artists in the exhibition all make insistent reference to place. Many share a graphic sensibility, an interest in creation myths, a fascination with the archive and a commitment to the use of found materials and detritus. With the majority of work in the exhibition made between 1964 and 2014, When the Stars Begin to Fall looks at the history of self-taught artists in influencing and defining what black art can be, as well as the significance of regional culture across time and space. Bringing together work that cites and plays with ideas of origin, the exhibition considers how identification and belonging—national and racial, artistic and institutional—shape our experience of art and meaning.

Artists in the exhibition

On October 16, 1968, during the medal ceremony for the men’s 200-meter race at the Mexico City Olympic Games, American athletes Tommie Smith, then twenty-four, and John Carlos raised their black-gloved fists in a symbolic act of protest. This gesture, seen around the world and captured through images that would go on to circulate well beyond the act itself, became a catalytic symbol for a myriad of beliefs, ideas and social causes.

For 19.83, Los Angeles–based artist Glenn Kaino (b. 1972) presents the New York debut of two works that mark the genesis of his ongoing collaboration with Olympian Tommie Smith. Bridge (2013) will transform the Museum’s street-level atrium space with a large-scale installation, while 19.83 (2013) will be presented in the Museum’s Project Space. In Bridge, Kaino uses several gold- painted casts of Tommie Smith’s arm to assemble a sculptural installation that takes the form of an upward-leading bridge. The structure, echoing multiple histories and ideas associated with the iconic image of Smith and Carlos, becomes a reservoir of memories that allows for the merging of past and present stories and a site to reflect on the impact of a powerful gesture nearly four decades after its occurrence. Bridge will be in conversation with 19.83, a sculptural environment from that also gives the exhibition its name. The work refers to Smith’s world record–breaking completion of the 200-meter race in 19.83 seconds, and takes the form of a three-level platform reminiscent of the one used to honor the top competitors at the Olympics. Plated in gold, the reflective and monumental object gives shape to the complexities of memory and brings form to the structures in which narratives are created, transmitted, challenged and remade.
Together, these works are an examination of the conditions from which symbolic moments such as the salute enter history, how these circumstances evolve over time and how memory and history compete for relevance in the present.
Glenn Kaino: 19.83 is organized by Assistant Curator Naima J. Keith.

In 1942, cultural anthropologist and novelist Zora Neale Hurston listed the term “draped down” as one of several terms meaning “well-dressed” in a glossary of Harlem Renaissance–era slang. The term seems as prescient today as it did when Hurston first recorded it. Draped Down highlights the ways in which feminine beauty is constructed, traced and interpreted in painting and photography. Triggering the senses through color, tone, form, context and memory, fashion and art intersect in works by artists including Njideka Akunyili (b. 1983), Narcissister (b. 1971), Malick Sidibé (b. 1935), James VanDerZee (1886–1983), Xaviera Simmons (b. 1974) and Fatima Tuggar (b. 1967). 4This exhibition encourages viewers to use a sartorial lens to expand their perceptions of art; read the works through pose, gesture and attitude; and, in turn, consider the implications of such readings. Draped Down is organized by 2013 Curatorial Fellow Monique Long.

Since 1978, Carrie Mae Weems (b. 1953, Portland, Oregon) has examined the historical complexities of identity, class and social relations through photography and other media, such as video, installation, sound and text. Working in series, her generally black-and-white photographs articulate and reify the African-American experience in particular for broad contemplation. The Museum Series (2006–present) shows Weems, shrouded in black, in front of cultural institutions around the world. The images are complicated by her position as an artist in relationship to these institutions, as well as by the constellation of race and gender inequality, agency and access that surround them. Implicated in each photograph by virtue of size and physical position, the viewer is asked to question the manner by which cultural institutions affirm or reject certain histories through their collecting and display decisions.

Carrie Mae Weems: The Museum Series is organized by Assistant Curator Lauren Haynes and runs concurrently with Weems’s mid-career retrospective, Carrie Mae Weems: Three Decades of Photography and Video, on view at the Guggenheim Museum from January 24 to May 14, 2014. Three Decades was organized by the Frist Center for Visual Arts in Nashville and has traveled to the Portland Art Museum, the Cleveland Museum of Art and the Cantor Arts Center at Stanford University.

The Studio Museum in Harlem
144 West 125th Street - New York, New York 10027
Hours and Admission
The Studio Museum is open Thursdays and Fridays, noon–9 pm; Saturdays, 10 am–6 pm; and Sundays, noon–6 pm. The Museum is closed to the public but available for school and group tours on Mondays, Tuesdays and Wednesdays. Museum admission is by suggested donation: $7 for adults; $3 for students (with valid identification) and seniors; and free for children 12 and under. Sundays are free at the Studio Museum, thanks to generous support from Target. For more information, visit studiomuseum.org.