Kevin Schmidt's solo exhibition presents a survey of recent works including two major new pieces, EDM House and High Altitude Balloon Harmless Amateur Radio Equipment, both made in 2013. For 'Boulevard', a solo show by Marian Penner Bancroft, details from a sequence of photographs of winter trees are grouped together in a mirrored formation around two of the Yaletown-Roundhouse Station's glass walls. 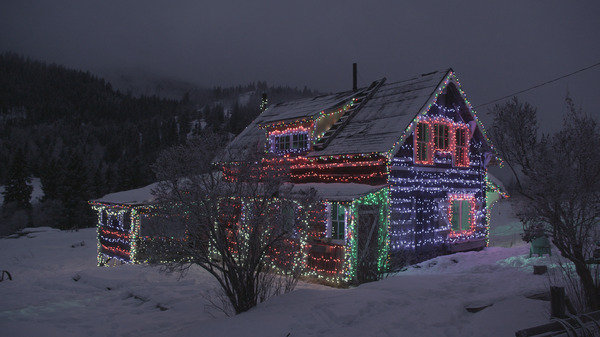 Schmidt is an artist who has consistently developed a body of work that addresses notions of a displaced spectacle, often within a consideration of the sublime. This ongoing proposition is tackled not so much through exclusive references to landscape, of being awestruck at the point of apprehending such beauty and wilderness, but by juxtaposing seemingly disparate elements within these environments. Works are often situated in remote locations, where Schmidt stages remarkable events which transfer elements of urban culture into untouched natural contexts. In this way, he simultaneously examines both the seductive elements of contemporary cultural production and the constructions that surround the idea of nature.

Commissioned by Fogo Island Arts, EDM House was produced by the artist for five months during the winter of 2013, using a small cabin in the interior of British Columbia. An abandoned house in the middle of an isolated winter landscape has its’ outside festooned with garlands of colourful lights akin to a suburban celebratory display. The building also glows from within; the illuminations synchronized to the rhythm of an electronic beat, creating the illusion of a night club in the middle of a secluded mountainous setting. This was the first European homestead in the area, built by Norwegian settlers in 1905, and like many such buildings in the new world, it evokes the desire for a new start away from poverty, crowding or persecution elsewhere.

Electronic Dance Music (EDM) typifies contemporary digital production in that it is disseminated on social media, an online community of enthusiasts, suggesting the individual as an alternative brand. Drawing parallels between the original settlers’ intent to escape to pastures new and contemporary “hobbyist” production or DIY culture as a counter to corporate dominance, Schmidt seeks to interrogate such ideas via a surreal combination of the spectacular. In addition to the light display itself, EDM House also functioned as a local radio FM channel, broadcasting the artist’s compositions within a small radius to those few passersby. The eerie nature of happening on this by chance is captured in the video projection, conjuring an occasion that is at once magical yet sinister, delightful yet strange. These anxieties are reflected in the horror-movie technique used to document the work, for as the camera rolls forwards or back, the zoom counteracts meaning the house stays the same size within the frame as the background swells or contracts.

Comprising a home-made camera and a large-format slide projection, High Altitude Balloon Harmless Amateur Radio Equipment used a weather balloon to capture an image of the Earth by launching the equipment 35,000 meters into space. Both the timing and the right conditions to release the shutter were carefully calculated so that the camera—made of Styrofoam and duct tape and fitted with a 90-mm Linhof lens and a 4-by-5 inch film holder— pointed away from the sun toward the horizon, the resulting photograph of the stratosphere presented as an immersive projection in the darkness of the gallery. Encounters with such images are usually confined to the internet, low-resolution images limited to the size of a screen. In contrast, here the image takes on an all-encompassing quality as well as a tangible physicality, revealing the curvature of the Earth, the vivid blue curve of its atmosphere, the blackness of space beyond and the surface of clouds, earth and water below. Undeniably beautiful, the image is foiled by the means of its presentation and its production.

Like many of Schmidt’s works, High Altitude Balloon Harmless Amateur Radio Equipment makes clear the narrative of its construction and process, unexpected parallels drawn by bringing together different “realities”. This will be elaborated in a forthcoming accompanying publication made by the artist, a manual for other people detailing how to replicate the project. Device, staging and duration are integral to the contemplation of landscape and culture. Standing between the projector and screen, visitors are silhouetted against the image becoming part of the scene akin to the lone figure in Caspar David Friedrich’s painting Wanderer above the Sea of Fog (1818). High Altitude Balloon Harmless Amateur Radio Equipment suggests a new form of the sublime – one not indebted to the romantic idea of experiencing nature first-hand, but based on extending human vision by technical means. The image offers us the opportunity of experiencing unseen spaces through the process of looking; the world as contained within the picture.

The combination of settings for the artist’s work, notions of the heroic coupled with seemingly amateur quests, all are recurrent elements in his installations. Schmidt’s interest in the epic expresses the desire to go beyond the limits of knowledge and to chart other territories. Yet in his work manufactured spectacle is tempered by skepticism. Schmidt counters accepted conventions by using visible reminders of handy-man construction and theatrical devices – smoke machines, stage lights and DIY photographic equipment – while seeking to produce experiences that speak to his interest in the tension between doubt and faith. The possibility of art is critically reconsidered by reflecting on the manufactured seductions of spectacle or the romantic search for some truth as embodied within scientific expeditions.

The exhibition in Vancouver is made in collaboration with Braunschweiger Kunstverein, Germany, the two complementary exhibitions drawing together a body of new and recent work which will form part of an accompanying monograph, the first to examine Schmidt’s practice overall, scheduled for production later this year.

Since the late sixties, Penner Bancroft has defined herself as a photographer, dedicating her practice to the medium, meditating on its conventions while also considering the dematerialization of the art object; combining conceptual art strategies as well as pushing the presentation and production of the photographic image into more immersive forms. She is known for drawing attention to the lines between where an image begins and what constitutes an image – at times using the physical framing device as a tangible three-dimensional photographic field.

The subject of Penner Bancroft’s work often resides in the personal, following her family, tracking their daily movements both real and, in the case of her ancestors, imagined. She embeds these inquiries into images of the landscape, using visual traces of a colonial transit to and across Canada as part of an individual yet generalized narrative of immigration and displacement. In recent years she has widened the scope of her research to include the histories of the fur trade, farming, music and religion in relation to the landscape and mapping.

For this new commission, details from a sequence of photographs of winter trees are grouped together in a mirrored formation around two of the station’s glass walls. As high-contrast translucent prints adhered to the windows, they create a lattice effect, casting patterns and shadows in the station when the sun shines through. Penner Bancroft deliberately selected these images from others taken along the Cambie Heritage Boulevard as the Canada Line forms a subterranean echo of the road. This green space, only fifty years old in 1993 when deemed a heritage site by the City of Vancouver, is a highly cultivated strip of land with nearly 450 trees, its significance as an example of Canadian urban design and planning—greatly influenced by the late 19th century English garden city movement—providing a metaphor for notions of origin, belonging, history and mapping.

Landscape figures prominently in Canadian history. Its scale, diversity, harsh climate and terrain are inescapable and inextricably linked to the formation of the nation – its cities, economics, culture and colonialist beginnings. In Vancouver this interlocking of landscape and identity is heightened by its geographic location as well as its relative youth.

The Cambie Heritage Boulevard is made from of a mix of grass, trees and ornamental plants, but featured prominently between 25th and 29th Avenues are the earliest plantings of two distinct types of trees: Golden Elms and Sequoias. The former originates in Germany, but is a staple of the English picturesque garden while the latter is a redwood indigenous to North America’s west coast. They are an unlikely pairing, but can be considered emblematic of attempts to cultivate space using landscaping strategies developed elsewhere. The contrast between these two trees heightens this sense of another place and time, and through Penner Bancroft’s images, the mural evokes both subtle and beautiful associations and dislocations, a sense of familiarity not simply as representations of trees but as something that is connected to an idea of home. At the Yaletown-Roundhouse Station the commuter will be prompted to consider something we know as belonging to here, while, like many of us, also belongs elsewhere.