An exquisite corpse based on Luis Bunuel's L'Age d'or. Six artist-groups or individual artists to reinterpret the surrealist work. An exhibition, which attempts a balancingact between six totally different artistic works and a comprehensive group project designed to interrelate them. 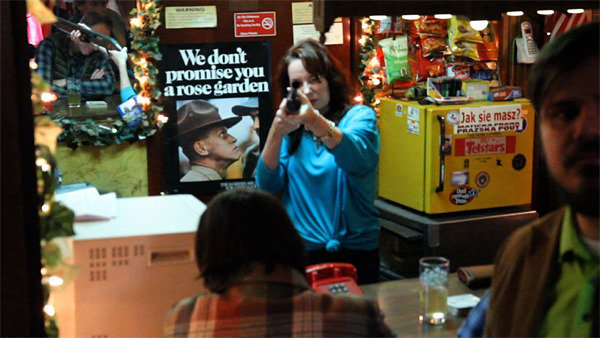 Luis Buñuel’s film L’Âge d’Or ranks as the seminal Surrealist film, of fundamental importance for that medium’s acceptance among the fine arts. The influence the film has exerted on contemporary art―especially on more recent narrative tendencies―is inestimable. For the project The Sting of the Scorpion initiated by the artist-duo M+M, the Museum Villa Stuck and the Institut Mathildenhöhe Darmstadt have invited six artist-groups or individual artists to reinterpret the surrealist work.

The approach of the Surrealists included the aim of making film, a multimedia form of expression, fruitful for the fine arts. In L’Âge d’Or (1930) Luis Buñuel used radical, partly scandalous means to try and achieve a social impact―with a particular focus on an imaginatively expanded concept of reality. These features are also characteristic of important positions in art today. Six contemporary artists who use the medium of film will each respond to one of the six heterogeneous episodes in that surrealist film, presenting it from their viewpoint.

The sequence of the film L’Âge d’Or adheres to the construction principle of an exquisite corpse consisting of six individual loosely connected elements or scenes. In the first scene, Buñuel himself underscores this compositional aspect of six narratives linked to form a whole by pointing to the six parts of the scorpion’s tail and by particularly emphasizing the poisonous sting (“l’humeur venimeuse”) at the end. Correspondingly, the film ends with the poisonously humorous final De-Sade scene.

The episodes of L’Âge d’Or each have different thematic and stylistic features, and these were decisive in choosing the artists to participate in the project. Tobias Zielony engages with the unfathomable quasi-documentary scorpion scene at the beginning of the film. The Australian-American music-artists group Chicks on Speed develop their version of how groups present themselves today as a modern equivalent to the film’s bandits scene, with Max Ernst playing the Surrealist leader of the gang. The duo M+M takes the film’s violent separation of the lovers as their point of departure for a mysterious nighttime odyssey, while the Israeli artist Keren Cytter transfers the feast in the mansion to a Texan saloon using a mixture of fatal violence and boredom. The Berlin artist Julian Rosefeldt presents the death of Buñuel’s hero Modot, only to then have him turn up, post mortem, in the Deep Gold nightclub. The project ends with John Bock’s variation of Buñuel’s De-Sade grotesque, with an unsettlingly obscene view of the Marquis’s orgiastic deathbed.

The Surrealists were one of the twentieth century’s most influential artist-groups and had great expectations of the genre of the film. In 1930, during the world economic crisis, film held out the promise of being an optimum mean of politically reorientating the group. From today’s point of view, both the thematic thrust and the strategies being tested in the making of the film seem decidedly up-to-date. The internationally renowned artists in the project have created an exhibition that is a Gesamtkunstwerk, uniting sculptural, performative, filmic and musical qualities. Against the backdrop of current social developments, what emerges both through the group dynamics and at the same time in a highly individual way is an experimental manifesto that once again puts the concept of the “Golden Age” to the test.

The six artists and or artist-groups participating in the exhibition The Sting of the Scorpion engage with Buñuel’s radical film L’Âge d’Or, each from their respective artistic viewpoint. The processes involved are the result of an intense exchange between the artists which began during a joint stay at the Spanish locations where L’Âge d’Or was filmed.

The artists focus anew on, and reassess current socio-dynamic developments by means of back references to that icon of Surrealism. This is tangible in an exhibition, which attempts a balancingact between six totally different artistic works and a comprehensive group project designed to interrelate them. The presentation of the individual film contributions in installation form is woven into an exhibition in which reworked cinema seats give the impression of a fragmented cinema. This referencing of L’Âge d’Or spurs a revaluation of the film, especially as it was prohibited from being shown for 50 years and during that time was only seen secretly in avant-garde circles. It also enables a new view of the potential of international exchange between artists, when it comes to observing social issues.

An exhibition catalogue in German and English will be published by Hatje Cantz Verlag, edited by Ralf Beil, Michael Buhrs and M+M, with essays by Ralf Beil, Michael Buhrs, Ugo Gregoretti, M+M and Marcus Steinweg, excerpts from Souvenirs entomologiques by Jean-Henri Fabre, and a detailed documentation on the film contributions by Tobias Zielony, Chicks on Speed, M+M, Keren Cytter, Julian Rosefeldt and John Bock. On sale in the museum shop, €24.90