The artist presents newly created paintings throughout the iconic Modernist house under the byname of Design Office, the entity which encompasses her diverse and prolific production in art, music, literature, film, and fashion. 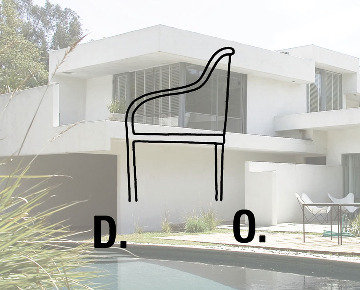 Design Office began in 1980 as a way to practice art outside of the gallery system. The first projects involved friends’ apartments. D.O. was to be sort of a reflective intervention into the lifestyle of the clients. Objects and a physical change to the interior based on the personality and desires/needs of the client. The design activity was not meant to be well executed or look a certain way, have a certain look or style. If anything it was a lo-fi aesthetic using or recycling other aesthetics.
—Kim Gordon

“Coming Soon,” an exhibition by Design Office with Kim Gordon, will take place at the Fitzpatrick-Leland House in Los Angeles.

Kim Gordon will present newly created paintings throughout the iconic Modernist house under the byname of Design Office, the entity which encompasses her diverse and prolific production in art, music, literature, film, and fashion. Rudolf Schindler's Fitzpatrick-Leland House (1936) was designed and constructed as a “spec” property to promote the housing development on the steep hillsides above Los Angeles.

In Gordon’s Wreath Paintings, she employs the decorative folk forms as stencils to produce vertiginous color abstractions. Her domestic staging of the works is an acknowledgement of the wreath’s everyday symbolic functions, from mourning to celebrating the seasons of harvest and Christmas. Some paintings are carefully installed, while others appear to be awaiting placement. The exhibition presents an evolving situation—an artist’s active workspace, or a home in the process of being redecorated—that suggests eventual completion.

Kim Gordon is an artist, musician, writer, fashion designer, and actor. She is a founding member of the band Sonic Youth, formed in 1981 and on indefinite hiatus since 2011. She has recently recorded and toured as part of the group Body/Head. Her writings have appeared in Real Life, Artforum, and Texte Zur Kunst, among other publications. Recent exhibitions include “The Show Is Over,” Gagosian London (2013) and the major survey “Design Office with Kim Gordon–Since 1980,” White Columns, New York (2013). Her recent book Is It My Body? was released by Sternberg Press in January 2014. She is currently working on a book of memoirs.