Games are forbidden in the labyrinth. The exhibition features a newly commissioned installation Chess (2014) and his film Durer's Rhinoceros (2010) in which the artist reflects on the social and historical conception of the psychiatric institution. 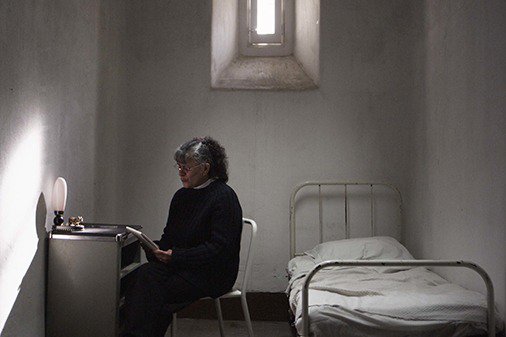 A co-production between REDCAT and Kadist Art Foundation, San Francisco, Games are forbidden in the labyrinth is Javier Téllez’s first solo exhibition on the West Coast. The exhibition features a newly commissioned installation Chess (2014) and Téllez’s film Dürer's Rhinoceros (2010) in which the artist reflects on the social and historical conception of the psychiatric institution: from architectural structures to technologies and treatments.

Mostly known for his films, Téllez works in collaboration with psychiatric patients or people with disabilities as protagonists. Combining documentary with fictional narratives, often taken from literature and cinema, the artist questions the definitions and social prejudices established between the concepts of normality and pathology. The strategy of using invisible or socially marginalized characters thus becomes a way for the artist to contaminate certain totalitarian versions of history, giving voice to those who usually have none, reflecting a form of resistance to the normalization and homogenization that is characteristic of the dominant discourse.

The point of departure for the exhibition is Dürer's Rhinoceros, shot in the panopticon of the Miguel Bombarda psychiatric hospital in Lisbon. Operational until 2011, the facility was built in 1896 according to Jeremy Bentham’s model to house the criminally insane. Téllez asked patients from a daily clinic to imagine stories of the former patients in the deserted old cells of the psychiatric hospital. This reconstruction of the everyday life of the institution was complemented by voice-overs reading texts from sources such as Bentham’s letter presenting the Panoptic, Plato’s Cave, and Kafka’s short story The Burrow, concerned with different architectural models related to the power of surveillance.

The front part of the gallery—the foyer for the projected film—is a giant chess game, which functions as a collective space to develop a trompe l´oeil of the delirium. One can imagine this chess-asylum as an anthology of the artist’s research on the history of mental institutions, confronting symbolically the institution, the treatments and the patients in an ideological battle: mental illness is consciously presented as a socio-historical construct, and not exclusively as a biological anomaly. The installation seeks to explain the role of medical treatments and psychological techniques as mechanisms of social control that conceal implicit socioeconomic contradictions. The patterns of the board—which also allude to a hospital floor—are invaded by a series of assemblages that function as the main organs of a sterile machine. These pieces appear dissected, showing the core of its constitution, incorporating the narrative of objects, historical moments, and images from literature and film that have contributed to the treatment of mental illness. They further provide references to renowned patients such as Antonin Artaud, Unica Zürn and Adolf Wölfli twentieth-century characters who articulated their own language informed by their condition. The figures and objects in the installation and video work will momentarily abandon the domesticated situation to which they have been reduced, to address the set rules and discourse that previously evaluated and institutionalized them.

The exhibition will be accompanied by a publication with essays by Dieter Roelstraete (Senior Curator at the MCA, Chicago), Ruth Estévez (gallery director and curator at REDCAT) and Javier Téllez.