The exhibition features works by artists who express explicit and personal struggles for freedom. Each of these struggles is distinctive. What unifies the nearly 130 works of art in the exhibition is their focus on the individual's aspirations for freedom and a desire for community and solidarity. This is the latest of the National Museum's five bicentennial 1814 exhibitions. Some of the contributors highlight problems, whereas others express positive perspectives and dreams of greater diversity. 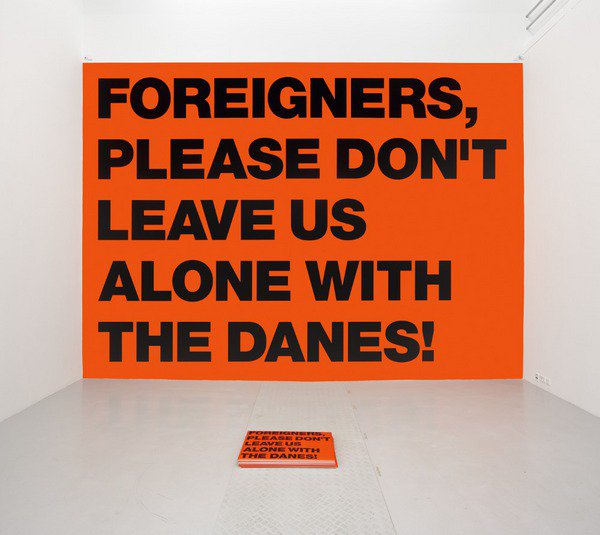 Ai Weiwei gives authorities the finger in Study of Perspective, Susan Hiller collects one hundred protest and freedom songs in Die Gedanken sind frei, Marianne Heier smashes a Moelven module in the installation Dear Friends and Rirkrit Tiravanija makes sausages filled with shredded copies of Thailand’s constitution in Freedom cannot be simulated. These are among the works the public will encounter in the international group exhibition “Take Liberty!”, which is the latest of the National Museum’s five bicentennial 1814 exhibitions.

China’s Ai Weiwei is one of the artists in the exhibition. Using social media as artistic practice his art and ideas have reached far outside the borders of his country. Chinese authorities have responded by shutting down his blogs in 2009: “[…] I am unable to tolerate plainclothes officers secretly trailing me and threatening my safety. You don’t understand human rights, but you ought to have heard of the constitution, right?”

The ideals from 1814
The exhibition reflects on, interprets and comments the philosophical and political ideals from 1814 in a contemporary perspective. Many of the exhibited works relate to issues around the freedom of expression. The artists are concerned about the opportunities and the perils of expressing oneself in a world which continues to be plagued by systematic violations of human rights.

Some of the contributors highlight problems, whereas others express positive perspectives and dreams of greater diversity. The revolutionary spirit we have seen in the numerous popular uprisings round the world in the past few years is also perceptible in many of the exhibition’s works.

Not a single narrative
Our present, which the exhibition essentially draws on, is manifold, colourful, chaotic, fragmented and heterogeneous. The exhibition does not attempt to articulate a coherent story – it reflects the diversity of society.

Andrea Kroksnes is the exhibition’s curator. “Take Liberty!” will run at the Museum of Contemporary Art in the period 11 April–10 August 2014.