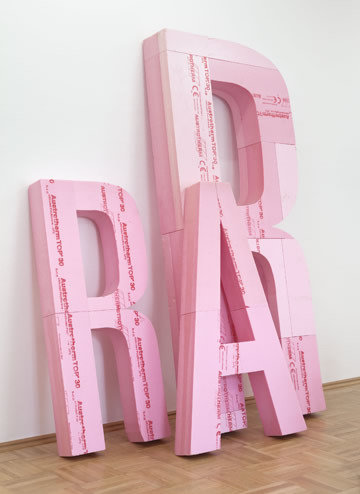 Invited by the board of the Secession
Curated by Annette Südbeck

Heinrich Dunst’s spatial interventions and performances address the hierarchies of signification and boundaries of meaning in aesthetic systems and orders of knowledge, and more particularly, the dualism of word and image. Assembling elements made from a variety of media, such as letters cut from synthetic materials, everyday objects, gestural-monochrome paintings, projections, or particleboard walls, he constructs dramaturgic ensembles that invalidate the conventional logic of meaning. To this end, he stages paradoxical formal plays, for example, between what is primary and what is subordinate, between inclusion and exclusion from the frame, between multiplication and the shifting proportions between model and exhibition. The distinctive quality of his artistic choices is the deliberate variance and openness of meaning they generate. His works may often equally well be read as standalone graphemic signs, sculptural objects, or traces of the artistic subject set in a perceptual context that includes their spatial surroundings.

Heinrich Dunst’s conceptual approach is rooted in the scene of 1980s Vienna, where artists endeavored to extend abstract painting into the exhibition space and give it contextual definition. Painting and the analysis of the functions of exhibition components remain a relevant frame of reference in his most recent works, such as the show About A B order (Galerie nächst St. Stephan, Vienna, 2013). Yet Dunst lends these issues new topicality by drawing a multifaceted picture and questioning the ostensibly unequivocal references he invokes, ultimately revealing the presuppositions on which art rests.

Heinrich Dunst was born in Hallein in 1955 and lives and works in Vienna.

Invited by the board of the Secession

Since 1999, the two Budapest-based Hungarian artists András Gálik and Bálint Havas have realized joint art projects under the name Little Warsaw. In films, performances, and installations, they explore history and its interpretations, the collective consciousness and established visual languages and traditions. The analysis of society’s engagement with history is a crucial factor in their work; the role of the artist as a producer of images, objects, or situations that are embedded in, or illustrate, a (historical) context is up for debate, as is the reception of works of art as a dynamic process (one that is subject to changing sociopolitical realities).

One preferred strategy Little Warsaw use to generate (new) collective awareness of what has faded into obscurity or was never perceived in the first place is the re- or novel contextualization of monuments and artistic artifacts. The displacement or spatial—and hence contextual—transfer is one of their preferred methods whereas these temporary interventions always leave the physical integrity of the object untouched.

Their contribution to the Hungarian pavilion at the 2003 Venice Biennale was the temporary union of the famous Bust of Nefertiti at the Egyptian Museum, Berlin, and a bronze body the artists had manufactured in Budapest (The Body of Nefertiti, 2003). The historic and the contemporary sculpture were joined for no more than a few hours in a closed ceremony at the museum; in the exhibition, the artists presented the (headless) body along with a film documenting the artistic intervention at the heart of their project.

Isolation Exercise (2005), a remake of the eponymous performance the Hungarian artist Tamás Szentjóby created in 1972, and Spiel der Wandlungen (2010), a restage of a performance by Jochen Gerz from 1972 are examples of the reenactments and reconstructions of works of art in which Little Warsaw examine the reception of historic pieces in a contemporary context and the significance of the co-presence of artist and audience.

Invited by the board of the Secession
Curated by Bettina Spörr

Many of von Gabain's works enter into unusual and surprising liaisons. In her exhibition City of broken furniture, which was on display in the galleries of the MAK (Museum of Applied Arts, Vienna) in 2013, she presented pieces of furniture in the role of "patients," "dressing" their "wounds," and contrasted them with a photographic series about furniture in the MAK's collections. In a nod to twentieth-century medical documentaries, the photographs bear titles that quote the names of illnesses or suggest classificatory schemes such as Syphilis or 6 Verbrecher (6 Criminals). In a series of photographs created in Tokyo in 2011, she staged used futons and mattresses in the style of Nobuyoshi Araki's bondage pictures. The artist also uses her own body in laconic or provocative observations about stereotypes as well as flashes of visual humor.

Von Gabain's earlier installations and interventions often relied on found and humble materials and a characteristic repertoire of images and forms, including speaker towers, banners, and slide shows. The artist works with various modes of appropriation, adapting subcultural practices or refashioning furniture and entire rooms resulting in analogies and unexpected moments. Her photographs, which play a growing role in her creative output, tell stories of such absurd situations.

In the Secession's Grafisches Kabinett, von Gabain presents new work created for this exhibition that elaborates on her previous oeuvre. Analogue black-and-white photographs that suggest an archaeological inventory are combined with several sculptural works. Some pictures show plaster casts of fragmentary limbs; in others, the artist can be seen extending her own body in a performative play with the prosthesis-like objects, exploring cultural and social paradigms and translating them into distinctive artistic ideas.

Kerstin von Gabain was born in Palo Alto (USA) in 1979 and lives and works in Vienna.