This new work will transpose 'Does the it stick', a project produced in response to Stephenson Works, a regeneration site in Newcastle-upon Tyne, to Bloomberg in London. 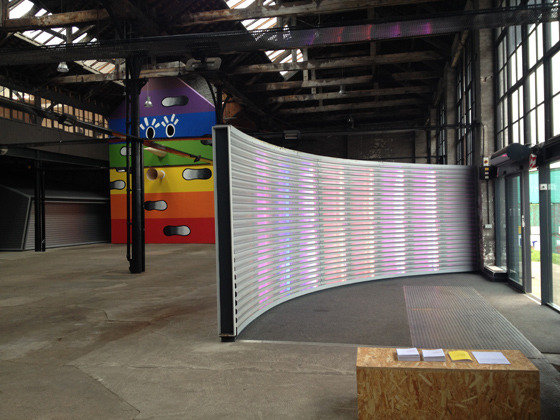 Joanne Tatham & Tom O’Sullivan have worked collaboratively since 1995, creating works that are choreographed situations; using objects, text, images and performance to consider and critique the status, value and role of contemporary art. These works are made directly in response to the situations within which the artists are invited to work, whilst maintaining and acknowledging the artists’ roles as ambivalent outsiders. Recent works have considered, in particular, how contemporary art can be expected to function in an instrumentalised role in relation to the diverse agendas of both the public and commercial realms. Their works often use text in performed, spoken or published form with, in many ways, their sculptures acting as necessary foils within these wider configurations.

For their Studio Voltaire commission at Bloomberg SPACE, Tatham & O’Sullivan will develop a work that engages both with the site of Bloomberg and the context of the commission. This new work will transpose DOES THE IT FIT, a project produced in response to Stephenson Works, a regeneration site in Newcastle-upon Tyne, to Bloomberg in London. Tatham & O'Sullivan have developed this strategy through a six-week production residency at Studio Voltaire, producing a single work involving multiple elements, which react with and respond to Bloomberg’s corporate identity. Using discursive lines of enquiry, Tatham & O’Sullivan will explore and challenge the conventions of architecture and space, the sharing of information and its value, and the constructs of the gallery space, as well as the wider corporate model. The commission will include artworks by Gary Webb and Tobias Rehberger that were previously produced by Bloomberg’s commissioning programme. The work will be accompanied by a programme of events including artists Will Holder & Chris Evans and Fiona Jardine, as well as a series of tours of the Bloomberg offices.

About the artists:
Joanne Tatham (b. 1971) and Tom O’Sullivan (b. 1967) live and work in Newcastle. Over the last decade Studio Voltaire has worked with the artists on a number of exhibitions and projects, having presented a solo exhibition at the gallery in 2005, an off-site project in 2006 and a solo performance last year. Other recent solo exhibitions include: 'DOES THE IT FIT', Co-curated by Joanne Tatham & Tom O’Sullivan, CIRCA Projects, Newcastle-upon-Tyne (2012); ‘A tool for the making of signs’, Chapter, Cardiff (2012); ‘Direct serious action is therefore necessary’, CCA, Glasgow (2010) and 'You can take it as a thing or you can take it as a thing', La Salle de Bains, Lyon (2009).

About Studio Voltaire:
Celebrating 20 years in 2014, Studio Voltaire is a leading independent contemporary arts organisation that exists to support artistic practices and create a space for thinking, experimentation and reflection; its main activities are the provision of affordable studios, a renowned programme of exhibitions, performances and commissions, and a pioneering education programme. Upcoming exhibitions in 2014 include Ella Kruglyanskaya, Joanne Tatham & Tom O'Sullivan, Judith Bernstein, Anne Collier and Marvin Gaye Chetwynd.
“Studio Voltaire has become one of the most energising spaces in London. Its ad-hoc approach and knack for spotting young talent makes it a formidable presence on the city’s art scene.” The Guardian
“One of the most dynamic spaces in London.” The Telegraph
“A fantastically worthwhile cause.” Vogue
www.studiovoltaire.org

About Bloomberg:
Bloomberg, the global business and financial information and news leader, gives influential decision makers a critical edge by connecting them to a dynamic network of information, people and ideas. The company’s strength—delivering data, news and analytics through innovative technology, quickly and accurately—is at the core of the Bloomberg Professional service, which provides real time financial information to more than 300,000 subscribers globally.
From dance on the streets and theatre in squares, to pavilions in parks and installations in galleries and museums, Bloomberg is committed to artistic projects that propel original ideas and reach new audiences. As an innovative communications company, Bloomberg has a particular interest in ways of inspiring audiences through new technology. Through our philanthropy programme, we help charities and non-profit organisations around the world with education and literacy programmes, health and medical research, social work, arts and culture, public parks and the environment.
www.bloombergspace.com

Image: Joanne Tatham & Tom O’Sullivan, DOES THE IT FIT, Installation view at Stephenson Works, CIRCA Projects, 2013. Courtesy of the Artists and The Modern Institute/Toby Webster Ltd, Glasgow