In the Shadow of Words. The show present multi-channel sound and video installation about the Almond's long-standing engagement with the development of the industrial age. 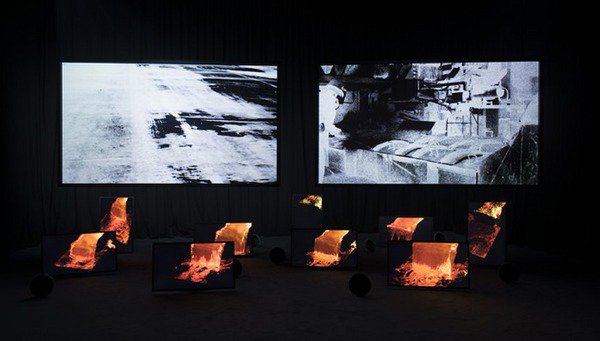 The exhibition features a multi-channel sound and video installation 'Less than Zero' and a train plate work also titled ‘In the Shadow of Words’. These works revisit Almond’s long-standing engagement with the development of the industrial age, its infrastructure, its consequences and its inherent effects on both our culture and physical landscape.

Darren Almond’s multiscreen installation ‘Less than Zero’ (2014) was filmed in the white tundra of Norilsk, Northern Siberia, a city that has figured repeatedly in the British artist’s work over the past dozen years – not least for how it functions as a microcosm of industrial and ecological dynamics today, and as a harbinger of tomorrow. The town was set up as a Soviet gulag, Norillag, centred upon mining via forced labour after the discovery of vast mineral reserves. Today, Norilsk exists as a hugely productive nickel mine which has toxic consequences on both the landscape and the atmosphere.

In Almond’s interacting looped sets of footage, which constitute the second part of a projected trilogy of film works on the region (beginning with Anthropocene: The Prelude in 2010), binary relations offer a darkly poetic, questioning exploration of this particular situation. On two large suspended screens, black and white film footage of nickel smelting is juxtaposed with images of swirling snows and pylons on the road that connects Norilsk with the port town of Dudinka, from which the nickel is shipped. In front of this ominous black and white footage, a sequence of monitors placed throughout the space show a metronomic, mechanised process of the smelting in hot colour.

Positive and negative, fire and ice, colour and monochrome: polarities link, here, to poles and poles to ice caps. In the work’s voiceover, Almond and a series of other speakers recite a litany of words by E.L. Doctorow in Japanese, Danish and English (extracted from the introduction to American Prometheus: The Triumph and Tragedy of J. Robert Oppenheimer by Kai Bird and Martin J Sherwin). The sequence represents a one-way timeline of the changing uses of nuclear energy.

The exhibition is punctuated with three bronze train plates that read, PEOPLE LAUGHED, PEOPLE CRIED, and MOST WERE SILENT. These lines are Oppenheimer’s own, describing – to Japanese interviewers – the reactions in America when the atomic tests were done. For Almond, they also reflect divided opinion across the world today: laughing, crying and silence all simultaneously taking place amongst those who lead, labour and witness. In Norilsk, as viewed through Almond’s probing lens, we can see something of the darkening road