The exhibition focuses on video installations that admit the viewer into dream worlds and personal fantasies. The visitor is immersed in worlds created by nine minds, from ideal images to nightmares. The viewer enters the space the artist has created in the installation by such means as the arrangement of several video projections in the room, camera movements, relationships between the video images and sculptural objects, and a compelling soundtrack. Artists: Eija-Liisa Ahtila, Olaf Breuning, Lori Hersberger, Susan Hiller, Abigail Lane, Mariko Mori, Georgina Starr, Anne-Mie van Kerckhoven, Jane and Louise Wilson 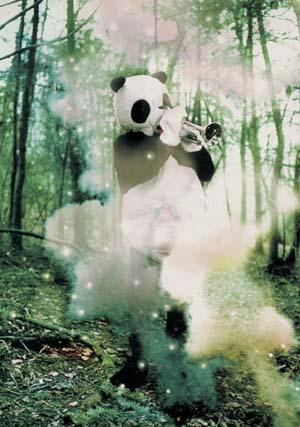 The Dream Extensions exhibition focuses on video installations that admit the viewer into dream worlds and personal fantasies. The visitor is immersed in worlds created by nine minds, from ideal images to nightmares. The viewer enters the space the artist has created in the installation by such means as the arrangement of several video projections in the room, camera movements, relationships between the video images and sculptural objects, and a compelling soundtrack.

The exhibition is striking for the variety of its imaginary spaces. The visions of the artists complement, enhance and/or correct each other. In addition to dreams, the fantasies in the video installations consist of existing rooms to which we are denied normal access, such as centres of power, criminal locations and the intimacy of the body. Using video installations, Dream Extensions brings the visitor face to face with mental worlds he would otherwise rarely if ever physically enter.

Many of these video installations employ a form of narrative suggestion, exactly like film, literature and pop songs. This prompts the visitor to look all around him, to listen, walk about or sit down, and thereby spend a considerable time picking up the thread of the stories. The spectator himself can enter the artist=s dreamworld and interpret the story from his own perspective. The artists themselves do not show their narrative material unambiguously, but leave it to each individual visitor to analyse it. The viewer can integrate the narrative episodes into his own life to the extent he wishes. Video installations enable artists to take to new heights literary and film experiments on the relationship between fiction, narrator and viewer.

Jane & Louise Wilson, using video installations, allow the viewer to steal into centres of the political imagination, such as nuclear bases and secret interrogation rooms. In Proton, Unity, Energy, Blizzard and Star City these British sisters explore the odd world of a space base in Kazakhstan. We form a rudimentary picture of this secret location on the basis of TV images. The visitor experiences the imposing nature of the launching base. These are contemporary monuments that illustrate the grandeur and alienation that go with technology.

In her vision, Mariko Mori combines a high-level meta-technology with a Buddhist tradition in which spiritual man transcends his physical limitations. Her work illustrates the points of contact between advanced technology and spiritual dreams from the past. Archaeology and futurism seem to come together again. Technological developments are able to provide the spiritual dreams of yesteryear with material foundations. At one time the mystic had to give up the best years of his life to acquire various dreamlike dimensions. The spirituality he cultivated gave him the sense of leaving his body. It is hard for contemporary man to have so much patience, but virtual technology takes him to heavenly experiences. Abigail Lane has put together a circuit comprising three video installations in which the viewer comes face to face with his malevolent counterpart. The age-old stories of advancement and destruction and life and death are given new life in these imaginary video spaces. In the end, however, in The Inspirator, the wounds are cared for. According to Abigail Lane, extrasensory confrontations with the nightmares deep inside us have a purifying effect.

In Anne-Mie Van Kerckhoven's video installations, a search for mental extremes is undertaken on the basis of a purely sensory experience of the body, direct presence and the burden of the daily grind. In so doing she deluges us with symbols whose interpretation we ourselves partly determine. Van Kerckhoven's imaginary spaces detect force-fields around which an atmosphere of taboo often hangs. Paranormal phenomena find a visible place for themselves in these video installations. Olaf Breuning brings us face to face with the subculture rituals practised by beings who appear to come from outside our space and time. We end up in the midst of esoteric gatherings, where we are dragged out of our familiar self-image by strange powers. On close inspection, the most striking thing about the whole performance is its irony. In The Wind, Eija-Liisa Ahtila allows us a look into an individual who is at odds with himself and the outside world. We witness this psychological confusion as if we ourselves were looking into the subjec's innermost self. Since the tormented character is presented together with all the objects, sounds and visitors around her, we become very much aware of the chasm that yawns between an autonomously fantasising mind and the uncontrollable factors in its environment. As a spectator we swing between involvement with the first-person narrator and the so-called objective world of the objects around her.

In her Bunny Lake project, Georgina Starr takes as her starting point two film classics, Otto Preminger's Bunny Lake is Missing and Peter Bogdanovich's Targets. A young girl, Bunny Lake, is reported missing by her mother, but at times the police doubt that the child ever actually existed. When you hear that in Targets a sniper fires at the audience from behind a cinema screen, you realise that here we have all the elements to undermine the boundaries between fiction and reality, criminal and victim, protagonist and spectator. The more closely video installations involve the viewer in the narrative events, the more he is confronted with the manipulability of both fiction and everyday reality.

Lori Hersberger draws the narrative thread out of the products of the film industry and leaves only the moments of tension. We experience pure adventure without the essential social setting. This is what the entertainment industry aspires to give us: the ability to indulge ourselves entirely in a sublime moment. The silver screen employs a number of stereotypical features that constantly recur in slightly altered forms. An equivalent tendency towards stunts and dangerous kicks also exists outside the film world, in certain sports, nightlife, musical performances and B before film had ever been heard of B in the clash of arms on battlefields and at tournaments. In Silver Room Hersberger screens a wild car chase involving a limousine and a truck alongside its own mirror image.

In her early video installation Belshazzar's Feast (1983-84), Susan Hiller links the newspaper stories of messages from outer space seen on TVs after broadcasting has ended, with the lost family tradition of telling tall tales round the open fire. The thread running through all this is the Bible story in which, at the request of King Nebuchadnezzar, the prophet Daniel interprets secret writing by an extraterrestrial hand. At a certain moment our technological dreams of the future and fantasies of extraterrestrial beings merge. New Age, science fiction and ufology start to become part of the same sphere.