Nature after nature. The exhibition presents artistic works using materials that surround us and constitute nature. Differentiations between synthetic and organic, manmade and natural are rejected. Maamoun's solo show focuses on her films, with which she injects history into existing images, texts and sounds. 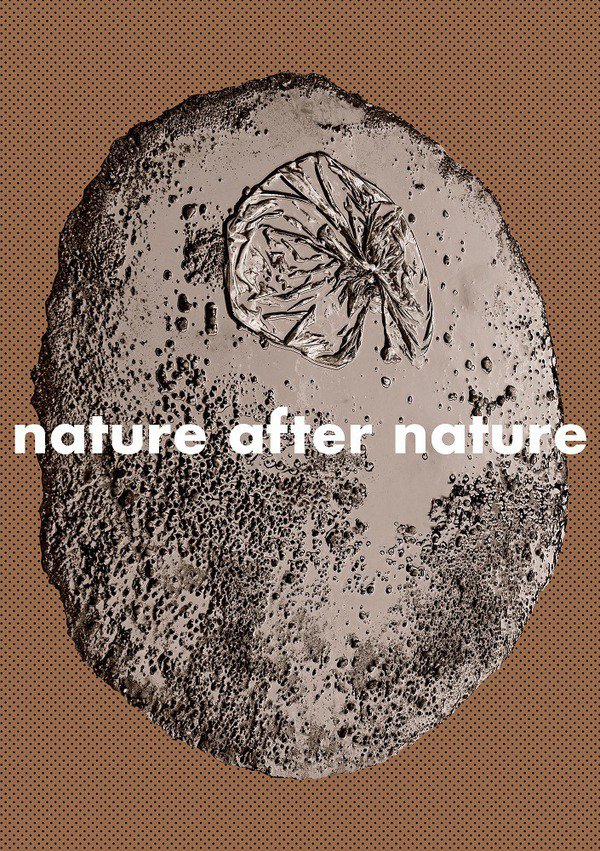 The division of nature and culture is obsolete. Nature is us and everything that surrounds us. Nature does and becomes; nature is subject and material at the same time.

The exhibition nature after nature presents artistic works using materials that surround us and constitute nature. Differentiations between synthetic and organic, manmade and natural are rejected. A nature after nature, which disassociates itself from an idealized and ideologized term and must be considered anew.

Fibreglass, resin, sand and litter form puddles of tar (Marlie Mul).Transparent cushions made of flexible plastic sheeting and filled with water, steel and latex trigger processes between the materials (Olga Balema). The digital scan of the skin of a copperhead snake is printed with light onto copper-clad plastic. A linguistically and pictorially transformed nature is being dissected (Sam Lewitt). Carpet, Dibond panels, sheet metal and rubber form an agricultural landscape (Nora Schultz).

The artists in the nature after nature exhibition concern themselves with a nature that firmly bears the mark of social and economic structures. A nature composed of materials like epoxies, aluminium or concrete; a nature which is the fundamental component of technologies and is revealed in chemical as well as physical processes. A nature that impacts beyond its sensory manifestations and whose varied interactions undermine our notions of time and space.

The exhibition demonstrates a nature after nature that, in its complex, global transformations, can only be grasped and comprehended in fragments.

Maha Maamoun
The Night of Counting the Years

Maha Maamoun’s first institutional solo exhibition focuses on her films, with which she injects history into existing images, texts and sounds: Domestic Tourism II (2008) compiles cameo appearances by the Pyramids of Giza in Egyptian cinema since the 1950s. This ancient Wonder of the World in its role as a backdrop for discussions of national, individual and gender identity in Egyptian mainstream cinema advances to become the protagonist of a dramatic feature film. When the text of a contemporary science fiction novel meets the reenactment of an iconic film image from the 1960s, the idea of imagination as potentiality is reduced to absurdity in 2026 (2010). Digging through blurred mobile phone footage on youtube which has captured the storming of the state security buildings in Cairo and Damanhur in spring 2011, Maamoun sets up an arduous course of coping with the past (Night Visitor, 2011). In her latest film Shooting Stars Remind Me of Eavesdroppers (2013), Maamoun likewise refuses to direct actors or scenes and instead orchestrates images and sounds recorded in Al-Azahr Park together with an intimate conversation about eavesdropping, truth and trust.

With her films, Maamoun trawls through the cultural imaginary in search of historiographical framing in which to set the present. This is also reflected in the exhibition title, which stems from the cinema classic by Shadi Abdel Salam. Maamoun’s works indicate that the question of whether art can step out of the symbolic circle in order to have an effect in the lifeworld is posed incorrectly: it’s all about the “how”. Art is opening out almost of its own accord when Maamoun takes seriously symbolic representations and has them clash with one another. In this process ruptures are caused in the representations, enabling the painful points of current questions to be intuited.