Beginning of the world. A large group of museum showcases has been destroyed and robbed, leaving an aura of mystery and sadness. Anxiety for what has been lost, chaos between origin and end. The exhibition is, metaphorically, the end of it, the beginning of all problems that actually could lead the world to its end. 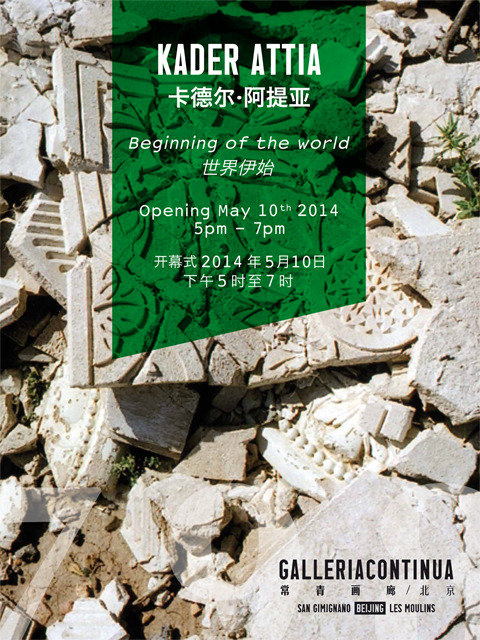 ‘The biggest illusion of the Human Mind is probably the one on which Man has built himself: the idea that he invents something, when all he does is repair.’
Kader Attia

On occasion of the artist’s first solo exhibition at the Galleria Continua in Beijing, the works are conceived as a sensory and perceptive experience.

The show opens with a small finite universe: a sphere of repaired mirrors that creates a world of infinite possibilities. Here, wounds are constantly trying to repair themselves, giving the idea of Repair as part of the Continuum of the Human Being. Just as the universe is a concept that automatically repairs itself and joins in every new form, so revolutions and chaos are a continuum of its internal order.

The title of the exhibition "Beginning of the World" has been chosen ironically.
In the main space, a large group of museum showcases has been destroyed and robbed, leaving an aura of mystery and sadness. Anxiety for what has been lost, chaos between origin and end. The Beginning of the World is, metaphorically, the end of it, the beginning of all problems that actually could lead the world to its end.

The concept behind this show arises from a long period of in-depth research, during which Kader Attia widely investigated the different meanings linked to the binomial: repair and “re-appropriation”.

This political idea of 'beginning' has a tight link with the “revolutionary dream”, which could be seen also as a de- evolution, in the way that people still believe that everything could be changed in order to create a better world to live in, although political order in the society is actually against this.
The exhibition reflects on the human activity of “repairing”, whereas everything we do leads us to a natural attitude that makes us struggle to survive. This behaviour is the dream of modernity, and riots have always been motivated by this utopian revolutionary idea to improve the world through change.

Thus, as the looted vitrines, also the rubbles of domestic walls leave a vacuum that can hardly be filled.
The glossy, clean and reassuring surface of the tiles brings to mind a familiar environment, which however, in contact with the crumbling brick and concrete, freezes while being part of it.
The human being who once again wants to intervene, create, and build... is defeated by the presence of these ruins. Raw materials that resemble memorable places are scattered in the exhibition space, increasing the entropy and the state of chaos that hovers in the air.

On the west wall of the gallery the portrait of the Caesar of Ethiopia, Haile Selassie, remains as the sole survivor of a past time. At his feet, abandoned, old, and damaged neon signs recall the time when he asked some Israeli architects who were building his Ministry of Foreign Affairs to use more glass for its walls. When the architects told him that it was neither important nor adequate to have such quantity of glass, he answered: “Indeed we need it, we want to be Modern."
These tired neon words, lying on the ground, take us back to the vane and continuous pursuit of the Myth of Modernity.

Twenty-six stamps, from different African nations, are realistically reproduced oil on canvas. They represent the dream of these nations after achieving independence. They show the desire to attain a social status while representing an ideal of modernization, freedom, and power, through hypothetical images such as a space shuttle, the USA moon landing, and so on...

Based on the idea of the never-ending desire of human civilizations to fight for survival, and on riots as instrument for social redemption, the exhibition presents a reverted climax in which proceeding upwards corresponds to a rarefaction of the works and their materiality. From chaos to immateriality, passing through a curious and absurd dialectics between opposites.

Mutilated trees are lying lifeless on the second floor, displaying visible signs of violence brought by wars and weapons. In this humanization of nature, the artist makes explicit the tension of the body that turns out hurt and resilient at the same time.
The work embodies a dialogue between violence – represented by the dead trunks of the trees – and the interest in “re-appropriation”, which takes shape in antique prostheses for human lower limbs.
“Repair” is, here again, an infinite concept that stands beyond culture and is part of Man’s nature.

On the upper floor of the gallery, on the largest wall, an almost invisible sentence written with white chalk on a white wall: ‘To resist is to remain invisible’. The mimesis of the text is also an evocation of Kazmir Malevich’s "White on White".
The transience of the material used to write the text – white chalk – underlines everyone’s weakness, and the aim of resistance as something that is part of everyday practice, a natural and cultural act.