An exhibition about the datafication of the world. The Estacio' Beta will host workshops, hackathons, lectures, talks, educational programmes and meetings of local and international communities. Its programme offers the general public activities such as Big Data Week (in a network with 25 cities), the Eight Day Festival and the Data Journalism Conference, among many others. 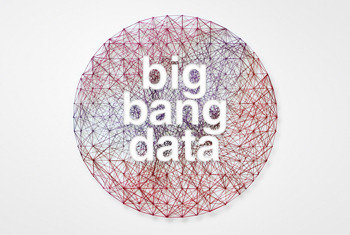 To coincide with its 20th anniversary, the CCCB is opening a new space for exhibition projects that bring an integrative approach to 21st-century culture and the major transformations of the digital age. _BIGBANGDATA is the first in this series of proposals. Curated by Olga Subirós and José Luis de Vicente, it opens at the CCCB on 8 May 2014 and will later run at the Espacio Fundación Telefónica in Madrid from February to May 2015.

_BIGBANGDATA is an exhibition about the datafication of the world. Is data the new oil? A potentially infinite source of wealth? Or should it be, first and foremost, a tool for the construction of a more transparent, participatory democracy? To navigate these waters, the exhibition combines artistic installations and projects, historical documentation, interviews, audiovisual documents, technological prototypes and a space for participatory projects.

For the five or more months of _BIGBANGDATA, the exhibition space will provide a platform for meeting and debate. The Estació Beta will host workshops, hackathons, lectures, talks, educational programmes and meetings of local and international communities. Its programme offers the general public activities such as Big Data Week (in a network with 25 cities), the Eight Day Festival and the Data Journalism Conference, among many others.

WHAT IS BIG BANG DATA?

The figures speak for themselves: every day, 2.5 trillion bytes of data are generated; during a single year, 2009, we produced the same quantity of data as in the entire history of humanity up to that point. The data explosion is growing exponentially as it expands towards infinity.

The last five years have seen a broad-based awareness among academic and scientific sectors, government administrations, business and culture that generating and interpreting data with the technologies we are developing has the power to radically change society. This data is an opportunity, a tool for prevention, efficacy and transparency, but it is also the ammunition used by the weapons of mass surveillance.

We all generate data, from mobile devices to sensors, social networks, digital photographs and videos, purchase transactions and GPS signals. What has changed is the increasing ease of storage and processing of these vast quantities of data, detecting patterns (of frequency, behaviour, consumption, vote, investment, etc.), which is quickly changing the decision-making process at all levels for ever.

To explore big bang data, the CCCB proposes an itinerary in the form of ten sections:

THE 10 SECTIONS OF THE EXHIBITION

The Weight of the Cloud

This section looks in depth at the concept of the data centre as an icon, attempting to answer the question: What lies on the other side? Subjects addressed include the architecture and aesthetics of data centres and their geostrategic importance in the world as new monuments that represent an emerging form of power while simultaneously being anonymous, secret spaces. Other issues are the emerging importance of the large-scale data storage industry, its energy footprint and its presence in the territory.

This section focuses on the magnitude and volume of the explosion of contemporary data by putting figures to it and showing its unstoppable growth, addressing, among other issues, the evolution of information storage capacity, the progressive reduction in size and cost of devices, and the rapid rise of a permanent preservation culture in a world where everything has to be stored.

The capacity for preserving and storing major data structures has prompted a scientific revolution that is transforming numerous disciplines. This section of the exhibition centres on the vocabulary generated by the science of the big data phenomenon, and explains the meaning of terms such as correlation, aggregation, prediction and mining in information analysis and visualisation.

Telling the World with Data

The birth of statistics in the mid-19th century gave rise to the need for a new language to explain reality from the quantitative angle, in terms of information design and infographics. Important historical cases will be presented that were pioneers in the design and visualisation of information, as well as the evolution of the syntax of infographics and scientific and data visualisation.

Datafication: Managing the World with Information

The ease of capturing, transmitting and preserving information has led to the emergence of a world where the majority of technological, industrial and economic processes produce huge quantities of data. It is estimated that the millions of sensors capturing and transmitting information—from the GPS receivers that record logistics distribution routes to the temperature, pressure and humidity sensors that monitor manufacturing lines—now generate as much data traffic on the Net as users do. This infrastructure of sensors and the resulting data sets are vital in major industrial and decision-making processes, but they also allow us to understand how these processes operate. For example, they tell us the routes taken by drivers around the city, the number and exact position of aircraft in the airspace at any time, and patterns in Christmas shopping as explained by credit card charges.

The Social Production of Data

As individuals producing data today, we are the cause and the effect of the deluge. All social activity ultimately produces data. This section includes sentiment analysis, based on data that reflects people’s moods or subjective actions, as well as products and devices that analyse self-tracking, the data that we generate with our activity.

The exploitation of privacy by means of the data we generate is one of the most controversial issues in the big data era. The commercialization of the self and the development of activities such as data mining have been analysed and criticized by many social agents. Artists and activists also respond to this reality.

This term encompasses the transformation of science, the humanities and culture following the big data explosion. It is a methodology based on data analysis to generate knowledge. The exhibition will present examples related to fields such as urban planning, medicine, sport, public security and crime prevention, and journalism.

If we all produce this deluge of information, who does the data belong to? This is the central issue in the debate on the politics and ethics of open data. The projects and initiatives in this section illustrate the defence of participatory democracy and today’s debate about data transparency.

The possibility of understanding many aspects of reality by quantifying and analysing data poses a major risk: the assumption that everything can be explained by data, or that access to data is the only way to make a decision. This section explores the dangers of data absolutism, the rationalist idea that perfect decisions can be made if sufficient data is available, and informational reductionism, the tendency to think that any social or natural phenomenon can be quantified and measured. It also highlights the idea that data does not always tell the scientific or objective truth: it is as subjective and ideologically driven as any other form of knowledge.

Over the course of the months in which the exhibition is programmed, there will also be conferences, hackathons and work groups for all audiences related with subjects such as:
The study of the visual representation of data for communicating information graphically in a clear and effective way. Data visualisation is a cross-cutting discipline that uses the power of images to explain the relations of meaning, cause and dependency that are found in abstract masses of information.
Active participation by the public in the collection and analysis of data. Citizen science has a particular influence on the evolution of scientific knowledge related to health and the environment.
The use of open data and data published by the administration to stimulate the debate on transparency and governability.
The liberalisation of data by cultural institutions, OPENGLAM (Open Galleries, Libraries, Archives and Museums).
The use of data mining in social and political research, based on the boom of social media such as Facebook, YouTube and Twitter, to observe different social dynamics.

In the framework of _BIGBANGDATA, the CCCB will be hosting events and activities about the promotion and knowledge of the phenomenon of data explosion.

A global platform of interconnected events that focus on the impact of the big data phenomenon on social, political, technological and commercial spheres. It brings together communities of scientists, technologists, designers, developers and managers that apply and develop the possibilities and opportunities that are generated within the context of the data explosion.

The festival will be held online, connecting over 25 cities worldwide with events, debates and presentations of data visualisation projects. Big Data Week is a platform designed to inspire and disseminate, organised by people who are passionate about the knowledge generated by data.

Monthly Data Journalism meetings
At the CCCB, during the months of May, June, September and October 2014

The Data Journalism Conference and OPENDATA are the largest data journalism meetings held to date in this country. These are lectures and work groups organised by the Open Knowledge Foundation, where experts explain how to work with data and the main tools for locating, converting and visualising it. On 25 April 2014, the second meeting will take place at the CCCB. For the duration of the “Big Bang Data” exhibition, there will be monthly meetings with work groups on the subject.

Enter Forum
I International Internet Privacy Forum
16, 17 and 18 June in the Teatre CCCB

Enter Forum is an international meeting about the Internet and privacy that reflects on the meaning of social networks and the risks and opportunities they offer, both socially and educationally.

The Festival aims to promote an open dialogue between science, technology and the arts in the form of proposals organized in public spaces and arts centres in the city of Barcelona, such as the CCCB and the MACBA. All the selected projects are internationally known. The CCCB will be hosting Experiment #3, for example.

Experiment #3
Data and Ethics Working Group (UK, NED)
In Barcelona, DEWG will be working in collaboration with Counterest and Domestic Data Streamers on a third experiment that monitors our behaviour and our mobility with the aim of making data donation more transparent and evident.
http://dataethics.org · http://domesticstreamers.com · http://counterest.net

The objective of #8daysbcn is to make Barcelona the world capital of communities that explore and offer alternatives to industrial consumption and production systems, in order to promote their shared impact (local, national and international), the cross-sector exchange of knowledge and personal relations between all members.

wEBSITE
_BIGBANGDATA has its own website: http://bigbangdata.cccb.org/
This online space hosts the project’s “making of” and all the contents it has generated and will continue to generate in the course of its residency in Barcelona.

_BIGBANGDATA is a co-production of the Centre de Cultura Contemporània de Barcelona and Fundación Telefónica, where it will run, after its presentation at the CCCB, from February to May 2015.

CCCB - Centre de Cultura Contemporània de Barcelona
Montalegre, 5 - 08001 Barcelona
Opening times
Tuesday to Sunday, 11:00 to 8:00 (closed Monday except public holidays)
Guided tours
In Catalan: Sunday at 11:30
In Spanish: Saturday at 11:30
Price: 6 €
Concessions: 4 € for senior citizens, under-25s, large families, single-parent families and groups (15 people and over) and for everybody every Wednesday.
Free admission for under-12s, Friends of the CCCB, the unwaged, holders of the Catalan Government teacher’s card, and Sundays from 15:00 to 20:00.