From Russia and Europe artists working with stencils, stickers, linocuts, drawings, comics, posters, murals... This is a small version of the exhibition as parallel programme of The First Supper Symposium. 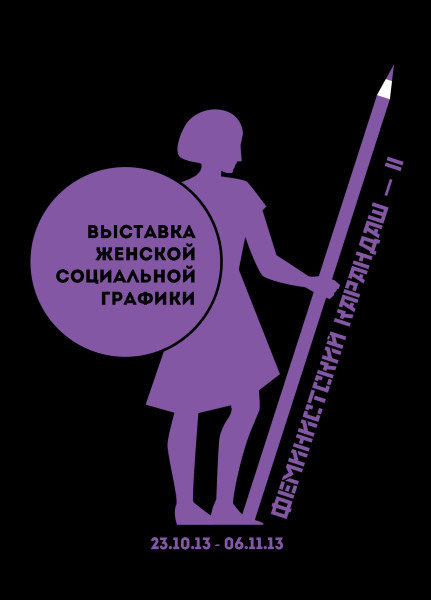 In autumn 2012, the exhibition Feminist Pencil opened in Moscow making a precedent of the first feminist exhibition in the Post-Soviet Russia. The movement and the platform for graphics brought then together six artists.

The second exhibition was shown in Moscow and St. Petersburg in 2013 - 2014 and has grown to thirty-five participants from Russia and Europe working with stencils, stickers, linocuts, drawings, comics, posters, murals as well as other genres and techniques.
The exhibition is curated by the Moscow-based art historian Nadia Plungian and artist Victoria Lomasko.

Victoria Lomasko is one of the most well-known Russian artists working in her own genre of the graphic report devoted to social topics. She is an author of educational art programs for teenager inmates, an activist and a curator of the exhibition project "Drawing the court".
Nadia Plungian is working on her research on female images in the Soviet Union in the 1930s-1950s and has an extensive knowledge of early feminist movements in USSR. This exhibition tells the story of ordinary women in Russia: what our lives are really like, how we are treated, and how we are trying to change our society. Our statement is an attempt to document our reality, and we want to be heard.
In her graphic reportages, Victoria Lomasko acquaints viewers with the daily lives of sex workers in Nizhny Novgorod and the injustices of the Russian court system, as exemplified by the Pussy Riot trial. In a series of stickers, the street art team Zoa Art discusses alcoholism in families and the physical abuse of codependent women. A stencil by the group Gandhi deals with the “disappearance” of women from public space, while the Street Art Faction of Feminist Initiative calls on women to form communes to combat domestic violence. Umnaya Masha comments on Russia’s homophobic laws, explaining how they affect schoolgirls, elderly women, and policewomen. Yana Smetanina’s project deals with slain female human rights activists and their invisibility in the media. Ilmira Bolotyan illustrates a story by her friend, a former nun, about the reality of life in a Russian Orthodox convent. Anna Repina presents a series of posters against domestic violence, while Hagra offers up posters about the exclusion of women from “male” sports. Mannaya Kasha opens the show with the street sticker Feminist Banner, dedicated to the combined resistance of women from all social strata.

In Oslo the curators present a smaller version of the large exhibition shown in 2013-2014. The showcase attempts to document the story of an ordinary woman in Russia, from either a capital or province.

In Oslo the curators present a smaller version of the large exhibition shown in 2013-2014. The showcase attempts to document the story of an ordinary woman in Russia, from either a capital or province.

Feminist Pencil has been a part of the festival Media Impact, which got nominated to the Russian art prize Innovation for year 2013. The short list also includes Bergen Triennial Monday begins on Saturday and exhibition Reconstruction documenting art scene of the 1990s in Moscow.