'The Immaterial Legacy. An Essay on the Collection' features 109 works that are shown alongside numerous contemporaneous publications, together with a sound booth in which can be heard several music compilations ranging from Basque Radikal Rock to pop with Gypsy roots and bakalao. 'The Listening Eye. Eugeni Bonet: Screens, Projections, Writings. This proposal' brings together the work of Eugeni Bonet from the early seventies to the present. 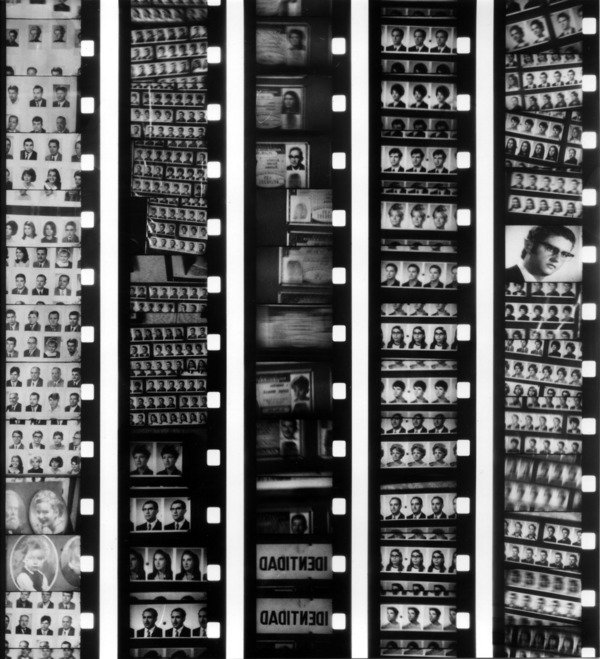 Curators: Valentín Roma, Julián Rodríguez and Víctor Lenore, in collaboration with Antònia M. Perelló
Exhibition organised and produced by: Museu d’Art Contemporani de Barcelona (MACBA) with the support of the Commemoration of the Tercentenary of 1714.

Under this heading are five sound compilations performed by Victor Lenore, journalist and music critic, mainly for the Spanish popular music magazine Rockdelux. ‘The democratisation of the fiesta’, ‘Tales of the neighbourhood’, ‘The Movida’, ‘The “rabble” were right’ and ‘The isolation of indie’ are the titles of each thematic nucleus where playlists, documentary material, quotes and texts narrate their respective contents.

The national Commemoration of the Tercentenary of the events of 1714 aims at promoting the memory of the origins and causes of the present through key events in our history, and by using the Commemoration as a platform for debate on our collective present and future. It is within this general framework that the exhibition Our History Starts Here has been developed.

This exhibition is part of L’Internationale, a cooperation project between six European museums – MACBA (Barcelona), MNCARS (Madrid), Moderna Galerija (Ljubljana), Museum van Hedendaagse Kunst (Antwerp), Van Abbemuseum (Eindhoven) and SALT (Istanbul and Ankara) – investigating the social function of art at the end of the last century, proposing a new internationalism based on the value of difference and horizontal.

The Museu d’Art Contemporani de Barcelona, MACBA presents The Listening Eye. Eugeni Bonet: Screens, Projections, Writings. This proposal, which brings together the work of Eugeni Bonet from the early seventies to the present, is organised in three large sections: Screens, showing Bonet’s activity as curator and programmer through a selection of six of his audiovisual programmes; Projections, dedicated to Bonet’s artistic practice; and Writings, which revolves around the book Eugeni Bonet. Escritos de vista y oído and the microsite www.macba.cat/eugenibonet, an extensive collection of downloadable texts that complement the contents of the publication.

The Listening Eye. Eugeni Bonet: Screens, Projections, Writings is a survey of the work of Eugeni Bonet (Barcelona, 1954), an artist, curator and writer who works in video, film and digital media. The exhibition at MACBA traces the work of Eugeni Bonet from his beginnings in the early seventies to the present, paying special attention to his transferences between reflection and practice, and between the context of the visual arts and the moving image. The project is organised in three distinct but complementary lines of research: the reconstruction of six audiovisual programmes; a museographic presentation of his artistic work; and the presentation of Escritos de vista y oído, a book containing twenty-four texts by the author, written between 1975 and today.

Screens
This section spotlights the activity of Bonet as curator and programmer of audiovisual cycles from six programmes that have been partially rebuilt and that allow us to understand some of Bonet’s main theoretical concepts.

1 - Desmontaje: film, vídeo / apropiación, reciclaje (Demontage: film, video/appropriation, recycling), 1993: in the early nineties the author’s practices encompassed the concept of dismantling – more commonly referred to as found footage or audiovisual appropriation. This had hardly been addressed at the time, at least in our context, and had little presence in audiovisual production in Spain. From this perspective, the title of the itinerant cycle produced by IVAM in 1993, which featured eighteen different programmes, was in itself indicative of the reluctance of Bonet to compartmentalise the different means of the moving image (film, video, television, etc.). Some of the authors who were part of this cycle were Craig Baldwin, Bruce Conner, Maurice Lemaître, Jay Rosenblatt, Aldo Tambellini and the collectives T.R. Uthco, Ant Farm and Emergency Broadcast Network.

2 - Intervenciones urbanas (Urban Interventions), 1994: conceived for the workshop of the same name that Muntadas directed in Arteleku in 1994, this programme was presented in a film club in San Sebastián, at the end of the successive workshop sessions. It brought together, in twelve sections, a wide selection of movie titles and video pieces around the theme of the city, from some seminal films such as those of László Moholy-Nagy and Jean Vigo to work by Mischka Popp/Thomas Bergmann and Peter d’Agostino, among others.

3 - Ciència-fricció: tecnofaules pel crepuscle del mil·lenni (Science-friction: technofables for the twilight of the Millennium), 1997: This cycle of six audiovisual programmes was presented at the Centre d’Art Santa Mònica in Barcelona and looked into the ‘friction’ between art, science, technology, the media and society, taking as its guiding thread the genre of science fiction, with its utopias, dystopias, futuristic fables, virtual reality, biotechnology, etc. The collected works spanning more than a decade of experimental production, from the early eighties until 1996, included, among others, authors like David Blair, Guillermo Gómez-Peña, Joan Jonas, Joan Leandre, Manel Muntaner and Jud Yalkut.

4 – El cine calculado (Calculated Cinema), 1999 and 2001: produced by BNV / Carta de Ajuste and the Museo Nacional Centro de Arte Reina Sofía in Madrid, this cycle of seven programmes was also presented at the Fundació Antoni Tàpies in Barcelona and at the Cinémathèque Royale de Belgique in Brussels (in the context of a project supported by Constant. Association for Art and Media). The selected pieces ranged from the early avant-garde to the work of the late nineties, from the binary geometry of calculated images to other types of arithmetic based on the frame or other sources of systematic composition. Among the artist-filmmakers included we should note Larry Cuba, Malcolm Le Grice, Norman McLaren/Evelyn Lambart, Pierre Rovere, Kurt Schwerdtfeger, and John and James Whitney.

5 - Comer o no Comer (To Eat or Not to Eat), 2002–3: this cycle of fifteen programmes constituted the audiovisual section of Comer o no Comer, an exhibition curated by Darío Corbeira, Carlos Jiménez and Eugeni Bonet in the context of Salamanca, European Capital of Culture 2002. It was an exploration of the relationship between audiovisual practices and food, connecting paradigmatic authors like Gabriel Axel, Luis Buñuel, Marco Ferreri and Pier Paolo Pasolini with others like Les Blank, Maureen Gosling, George Kuchar, Martha Rosler, Hans Jürgen Syberberg and Frans Zwartjes. The sections that formed the cycle – ‘Artes de la mesa, culturas del vientre’ (Table manners, cultures of the belly), ‘Historia(s) del hambre’ (Story[ies] of hunger), ‘Carta global y alimentos mutantes’ (Global map and mutant food) and ‘Cocinas regias’ (Regal cuisines) – were a sort of gastrosophic menu with a sense of humour.

6 - Desconexiones peritelevisivas (Peritelevision Disconnections), 2007: This series of five programmes was shown on HoritzóTV '07, a project coordinated by Clara Garí and held at La Capella, Barcelona. It presented agents and proposals shown on analogue and digital platforms. The selection brought together a mix of works that had jointly found funding and a place – including a permanent space – on public and local television. Works included Arsenal, broadcast by TV3 between 1985 and 1987, the ‘capsules’ and projects of Ester Xargay and Neokinok TV for BTV (Barcelona TV), and other more individual contributions by Javier Codesal, Muntadas and Raul Rodríguez.

This area focuses on the earlier and later stages of Bonet’s artistic practice. It begins with the ‘film-sculptures’ of the seventies, most of which were never shown publicly and have been recreated for this occasion, and with other works such as V-2, 1974, his first contact with video now rescued from its original support; Photomatons, 1976, and Toma-Vistas, 1978, among his multi-screen essays; and finally 133, 1978–79, a film made together with Eugènia Balcells, where the artist’s interest lies in found footage, dismantling and audiovisual appropriation.

His most recent works include Usession, 2002, invariably presented as an installation of multiple projections, and the feature films Tira tu reloj al agua (Variaciones sobre una cinegrafía intuida de José Val del Omar) (Throw your watch into the water [Variations on a intuitive film by José Val del Omar]), 2003–4, and eGolem, 2007– ongoing, the latter with a projected version navigable online. As is his characteristic practice, between these works Bonet has interleaved faster cuts and shorter formats, such as 10 MIN, 2005, and A Spanish Delight, 2007.

Other pieces made in the eighties and nineties are available online, by decision of the artist, both inside and outside the Museum.

The third line of research reinforces the idea, held by Bonet himself, that his work consists of an exercise in cross-writing, not always on paper and graphic media, but from and by various means. This section revolves around the book Eugeni Bonet. Escritos de vista y oído, specifically produced by MACBA and bringing together twenty-four texts published since 1975. The essays are compiled here focusing on four different moments: the first, in which a young Bonet progresses from the pages of magazines like Star and Zoom to some of the authors and subjects whom he later studied with greater knowledge; another, covering various items in which the essayist defines and lists his most important concepts – dismantling, expanded image, installation vocabulary, etc.; another of a genealogical nature, based on recapitulations of the past, present and future of video and television; as well as a fourth moment in which Bonet addresses his fellow travellers over the years, his links with Juan Downey, Werner Nekes, Paul Sharits, Michael Snow and José Val del Omar, among others.

To enlarge the contents of this publication and exhibition project, a website has been created (http://www.macba.cat/eugenibonet) containing a vast collection of downloadable texts.

Finally, The Listening Eye. Eugeni Bonet: Screens, Projections, Writings includes a series of public programmes in various formats – roundtable discussions, film presentations and discussions, which will be developed throughout the duration of the exhibition.