The Need for Practice

Rather than collecting various examples of self-organisation, this group exhibition focuses on its semantic network with components such as the relationship between individual and collective, the production of new forms of knowledge, public space and social imaginary. 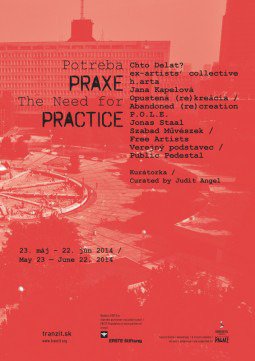 We are living in a prolonged period of economic, social, political and environmental crisis, in which the yearning for global, redeeming visions of the future has become increasingly frustrating, if not obsolete. However, it is not possible to live without expectations, without being able to imagine better conditions, a more positive state of affairs. And what if – as many thinkers, cultural producers and various practitioners propose – instead of heading towards fixed images of the future, we understand utopia, as a continuous process of becoming in which we participate? That is, instead of viewing the future as an end, a goal we should attain in an ever-delayed 'some day', we actualize it in the present, perform it in the everyday?

The pragmatic and processual understanding of envisioning the future goes hand in hand with the necessity of re-thinking and re-working the relation between theory and practice, symbolic resistance and direct action, art and activism. Though (hyper)individualism is a key aspect of neoliberal capitalism, it is only in the last decades that social-political thinking has reconsidered the relation between individual and collective by recognising the role of singularities and differences in shaping common ground. The very idea of opposition/resistance to the system has undergone changes. Instead of negatively defining themselves by being merely against existing structures, today many initiatives develop their own projects in a self-sustaining and/or self-organised way.

The current tendency to re-visit the concept and practice of self-organisation is connected to the hope for social change, to the belief in its potential for social action by means of solidarity and common interest, while maintaining diversity and difference.
All this happens in spite of the erosion of the concept, as self-organisation today is also part of management strategies, and accompanied by the 'outsourcing tendency' of the state, which aims to pass on responsibility for social services to the citizens. In the art context, the actuality of self-organisation may be further identified in its double nature – being both process and entity -, in new ways of dealing with institutions and defining art's function in society.

The starting point of this exhibition is self-organisation viewed as a meaningful practice which allows for linking individual initiative to common interest, making visible and filling in gaps in the system, opening up space for doing things in a different way. Rather than collecting various examples of self-organisation, the exhibition focuses on its semantic network with components such as friendship, solidarity, collaboration, the relationship between individual and collective, the production of new forms of knowledge, public space and social imaginary. The selection concentrates on the sphere of art, as art's social function is at stake.

Though the exhibition involves mainly group dynamics as well as linkages between art and activism, not all of the presented projects/works deal with self-organisation in a direct way. Rather, the exhibition comes into being as a self-contextualising structure, a pool of concepts, practices and models which may function as tools for constructing a liveable future.

Opening: May 23, 2014, 18:00
Opening day program:
18:00 Introduction to the exhibition by Judit Angel
18:15 Guided tour with participating artists
19:30 P.O.L.E: From the world of crafts and services in several pictures – live broadcast from studio