Once again the world is flat. Beginning with the square frame of the paintings of the early 1970s, the work moves on to encompass architectural settings. Haim Steinbach also integrates specific objects and artworks from Zurich art collections into his 'Displays.' 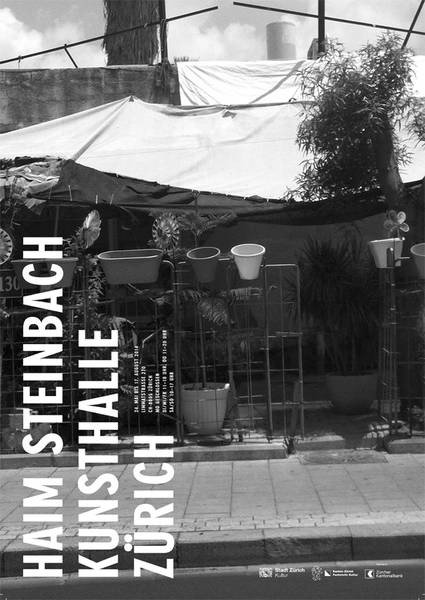 This expansive exhibition at Kunsthalle Zürich presents the work of Haim Steinbach (born in Israel in 1944, lives and works in New York) from the early 1970s to the present day. The show focuses on Haim Steinbach’s contextual work with objects. Beginning with the square frame of the paintings of the early 1970s, the work moves on to encompass architectural settings. Having incorporated objects from local collections in his exhibitions at the Center for Curatorial Studies Bard Hessel Museum in Annandale-on-Hudson, New York, in 2013, with which the Kunsthalle Zürich is collaborating for this exhibition, and at the Serpentine Galleries in London in Spring 2014, Haim Steinbach also integrates specific objects and art- works from Zürich art collections into his “Displays.”

In a conversation between the curators of the exhibition and the artist, Haim Steinbach states:

„Our perception of reality, objects included, changes with every period, time and context. We speak of a generational shift, or a generation gap. But the perception of objects also has to do with how we project our desires and ideological prejudices and beliefs onto them.“

Around 1975 Haim Steinbach came upon the idea of the shelf as a space for the play of objects. This led to the concept of “Display,” namely engaging the object and its context. In 1979, Display #7 was shown at Artists Space in New York. The shelf surrounds us in our everyday lives; at home, in shops, in the workplace. Wherever something material is stored or presented, the shelf structures the space – and becomes invisible itself in the process. Also no cultural and social institution devot- ed to the collection and presentation of objects can work without it.

„The wall became the primary place for me to present physical, already existing objects. And in that sense it would be a shelf that would be put on the wall and then the objects arranged on it. But if the objects are arranged on the shelf on the wall, then the question is: What is a wall? What is a shelf? What culture does it come from? How do cultures differentiate be- tween walls?”

Beyond its ordinary function, for Steinbach the shelf is a concept that registers the structure of objects. Like the level or the measuring stick, it is a device. It evolves from the minimal, standard, DIY-store board to the handmade shelf as it relates to different cultural traditions of vernacular and craft, and to historical periods and styles. And yet we always view it from different perspectives: as a sort of stage and prop for personal narratives and as an exhibition frame on the wall. It becomes the element of a bigger arrangement, integrating the walls and floors of the space, as well as the viewer.

Haim Steinbach’s art plays a major role in the contemporary artistic discourse on the object. Start- ing with the practices of Minimalism and Pop Art, as well as Performance and Conceptual Art, Steinbach’s ideas evolve towards the formation of a new paradigm for the object and its place. It links important elements of these art forms and sets new focal points between art and the every- day, production and consumption, and the relationships between image, object and space. Engag- ing the architectural and cultural features of the exhibition space, Steinbach develops specific presentation formats. These formats incorporate existing, borrowed, or purchased objects of every- day use. And the inclusion of objects and artworks from private, public, art-historical, and everyday collections in the exhibition is central to Steinbach’s artistic practice. It relates rituals of collecting and collections with questions of collectivizing and collectivity and thus affirms the recent para- digm shift for art and its interdisciplinary frames of reference. While the objects themselves are presented unchanged, it is the arrangement and presentation that confirms their reality and hence points to their special histories and making, from the mass-produced object to the unique flea mar- ket find.“What’s most important is that all of these objects are part of our world; they are part of our language. And they overlap. And you may have a mass-produced object next to something that your child just made out of wood in first grade or second grade. Or you could have a mass-produced object next to a bowl of olives, which repeat, which are the same. Nature re- peats itself. And all these things are beginning to relate.”

Our perception of the world has fundamentally changed. In a kind of reversal of the Copernican Revolution – the breakthrough of a spatial planetary model – the digital circulation of information, images, words and signs puts us into a new state of flatness.

“In the beginning, painters painted on the walls of their cave, and later on they painted the walls of the cathedral. Even later they painted with oil paint on canvas, the painting was like a wall that could be removed and placed someplace else. So it’s about the projection of imagination into the social, cultural and architectural space.”

It is no coincidence that painting provides a key reference here: by the early 1970s with Minimalist paintings, Steinbach tested the boundaries and codes of an abstract visual idiom. He envisioned a direct relationship between the calculated placement of coloured bars around monochrome squares and the everyday world of objects – from board games to floor coverings. This is so, just as the object is the actual raison d’être of the shelf, and just as background and foreground always inter- act. If painting can be understood as the extension of a wall, what is its status as an object? And if the shelf has a mediating function in the presentation of things as an arrangement in space, what consequences does it have for our understanding and appreciation of the play of objects? „It’s fascinating how an object is registered in our memory, how it becomes a ‘gestalt’, an image, or now digitalized in our brain. How do we see things, really? Didn’t Beethoven compose the 9th symphony when he was deaf? The screen is in fact an extension of our gut and brain. The object and the screen, the body and the pill, ‘strawberry fields.’“

Catalogue
A catalogue to accompany the exhibition will be published in collaboration with the Center for Curatorial Studies Bard Hessel Museum in Annandale-on-Hudson, New York, and the Serpentine Galleries, London. The catalogue includes contributions by Johanna Burton and Germano Celant, and a conversation between the artist, Tom Eccles, Hans Ulrich Obrist and Beatrix Ruf.

SLAVS AND TATARS: LEKTOR
In advance of their fall exhibition (opening: 29 August, 2014), the artist group Slavs and Tatars developed a new version of the audio work «Lektor» for the future public library space of Kunsthalle Zürich. The work consists of an Uighur voice reading excerpts from the medieval epic poem Kutadgu Bilig (Wisdom of Royal Glory), and a voice-over of the German translation. Encourag- ing a constant shift of speakers and listeners «Lektor» welcomes a wide audience to engage with its subjects and situations. On the occasion of the newest exhibition at Kunsthalle Zürich, the audio work itself will shift from its German-Uighur “original” to a new Turkish-German version, further delving into the dance of translation and mediation.

SEMINALS – LECTURES. IN COOPERATION WITH THE INSTITUTE OF ART HISTORY, UNIVERSITY OF ZURICH
David Joselit: How to Make the Many
Saturday, 24 May, 3 pm
Organised in cooperation with different educational institutions, this series of events hosts keynote lectures by leading theorists of art who will discuss their seminal work in relation to the current exhibition and in a subse- quent seminar with students. The theme of “flatness” in the context of Haim Steinbach’s exhibition will be explored by influential art historian David Joselit from the perspective of his latest book After Art (2012), in which he examines the state of objects and/as images in digital times. Haim Steinbach will be present for the conversation.

Q&A – ARTIST TALKS, QUESTIONS AND ANSWERS
Slavs and Tatars: The Transliterative Tease. With Stefan Nowotny
Thursday, 12 July, 6.30 pm
Slavs and Tatars’ lecture-performance departs from their audio work «Lektor» and will further explore language practices, namely transliteration (the conversion of scripts) as “a strategy equally of resistance and research in notions of identity politics, colonialism, and liturgical reform.” Stefan Nowotny, a theorist of translation and translator of theory will join the artist for a talk.

Haim Steinbach in conversation with Helen Marten and Tom Eccles
Sunday, 15 June, 4 pm
How do we experience our fabricated environment? How do we arrange the things we live with – including ourselves, and our social relations? How does art, such as Minimalism, Pop Art and Appropriation Art, tap into these all-too-human experiences – and how does it shift, negotiate and change them? Over the last four dec- ades, the work of Haim Steinbach has provided a series of answers to these questions, but also raised further questions, which the artist will discuss with the young artist Helen Marten and curator Tom Eccles, and us.

REALITY CHECK –ENCOUNTERS AND TALKS
The world as seen through the shelf. With Rafael Horzon
Thursday, 10 July, 6.30 pm – location to be announced (German)
This series of events involves encounters between experts from areas on the boundaries of art with a view to inspiring a broader discussion on the key issues of the exhibition. The evening will be shaped by the wide- ranging mutualities but also misunderstandings between the different perspectives of art, design, and craft; entrepreneurship, commodification, and everyday activity.

FAMILY AFTERNOONS
SUNDAYS, 2 – 3.30 pm: 1.6., 22.6. NO BOOKING REQUIRED, Entry: 20.00 CHF per family
We playfully explore the themes and questions raised by the exhibition with children from 5–13 years and ac- companying adults and translate the resulting impressions into our own creative work.

WORKSHOPS FOR CHILDREN AND YOUNG PEOPLE
90 MIN., ON REQUEST, +41 (0)44 272 15 15, info@kunsthallezurich.ch
Based on a dialogue suited to the participants’ age, school classes at all levels can explore contemporary art with us and create their own artistic work. Workshops are free of charge for school classes from the Canton of Zurich.

Please consult the up-to-date information on our website: www.kunsthallezurich.ch.

Press information: Friday, 23 May, 11 am
We would be happy to provide additional information and digital visual material:
Tel. +41 (0)44 272 15 15 or email presse@kunsthallezurich.ch