Ariel Schlesinger intervenes, changes, transforms the object into something new and enables surprising discoveries for the viewer within something that seemed utterly familiar. Sarah Oppenheimer's interventions disrupt the experience that the visitors have of the succession of spaces within a building. 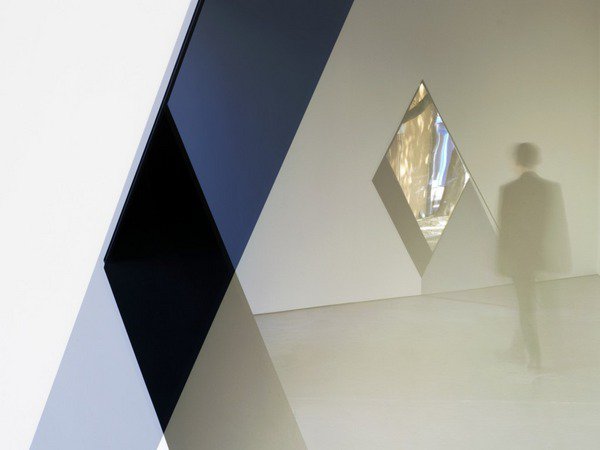 In recent years Ariel Schlesinger has repeatedly garnered attention thanks to his astonishing works and spatial interventions. He has now installed his largest institutional solo exhibition to date at the Kunsthaus Baselland.

The artist, who was born in 1980 in Jerusalem and currently lives and works in Berlin, has become known for minimal, always extremely precise, interventions into everyday objects which – appearing to have become functionless – demonstrate new possibilities for dealing with those things. Ariel Schlesinger works with objects that he takes from the quotidian, which he alters through sophisticated or sometimes radical interventions, thus transforming them into something that rarely strips them of their form, but does take away their given character – and in return bestows them mystery and fascination.

The artist employs a kind of destructive-constructive strategy in many of his works; he intervenes, changes, transforms the object into something new and enables surprising discoveries for the viewer within something that seemed utterly familiar. Occasionally it seems as if the artist wants to raise that which is gone, broken or dead to new life, to rescue it from disappearing and to revitalise lost certainties through his precise interventions.

There are numerous works that one encounters as if with a slight shock of recognition, as they draw in the viewer’s full attention. Sometimes the new objects that emerge from this seem threatening, or even dangerous in the context in which they are presented. Only little by little, with careful observation, do they become more logical, intelligible and comprehensible.On the condition that one engages with the dense chain of reflexive thought and fantasy that helps one, by simply viewing, to get closer to the bottom of things – and to see more behind everything, to discover more than one had expected before.

A publication on Ariel Schlesinger will appear in June from the Christoph Merian Verlag, edited by Ines Goldbach. It contains texts from fellow artist Jonathan Monk, the art and architecture historian Robert Ginsberg, as well as an in-depth interview with Ariel Schlesinger.

Sarah Oppenheimer, born 1972 and living in New York, presents her first institutional exhibition in Europe at the Kunsthaus Baselland. Her work has been shown at numerous museums across the United States, including at the Baltimore Museum of Art, the Andy Warhol Museum and the Museum of Contemporary Art San Diego.

Developed for Kunsthaus Baselland, 33-D reconfigures the interior spaces of the Kunsthaus along the building’s structural grid. Two large glass sheets are mounted at a 45-degree angle to the external skin of the building. These sheets function simultaneously as both wall and projection surface, reflecting sightlines within and without the museum. Each glass plane creates traversable apertures for the visitor to cross. These openings create unexpected thresholds and trajectories for visitor movement through the space.

Oppenheimer’s interventions disrupt the experience that we, the visitors, have of the succession of spaces within a building. Her work modifies the existing architectural elements of a building while simultaneously altering our perception of the overall building plan. This transformation varies further with changing light conditions at different times of day and year. Instead of a linear experience of space and time, Oppenheimer offers the visitor a reshuffled experience of the two; instead of visitors and viewers, we become direct participants in a situation.