Nils Dardel and the Modern Age

The exhibition features some 100 works - including several iconic works such as The Dying Dandy (1918), Visit to an Eccentric Lady (1921), Crime of Passion (1921), and The Waterfall (1921) - mostly paintings and drawings, but also Dardel's palette, programmes from the Ballets suedois and a stage model and the score for the ballet The Madhouse. 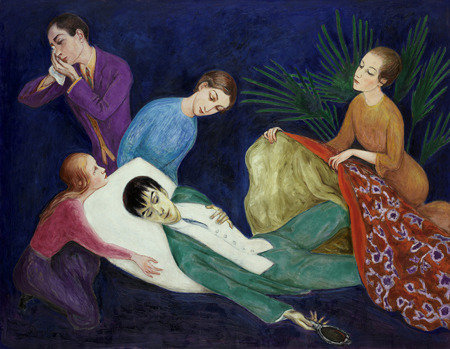 Nils Dardel is one of Sweden’s most popular artists. The Moderna Museet’s exhibition Nils Dardel and the Modern Age stresses that Dardel was not just a dandyish eccentric in the salons of high society. In fact, he took part actively in the cosmopolitan avant-garde in Paris and used art to convey the early 20th century jazz era and the modern approach to all kinds of human relationships.

Europe changed radically in the early 20th century. The region was being massively industrialised and urbanised, and technology introduced entirely new means of spreading ideas and communicating over national boundaries. The fleeting, ephemeral modern life gave rise to a heightened sensitivity and restless mobility, which was expressed in modernist art. The avant-garde was constantly looking for what had never been seen, and new “isms” were born head to tail: cubism, futurism, orphism, rayonism.

Nils Dardel (1888-1943) is not, however, a pure modernist aesthetically. His works are in conflict with the times in which he lived, a modern age that was preoccupied with keeping up with the latest fashions and did not fully appreciate an artist who never quite embraced the avant-garde. Dardel had an old-fashioned way of using stories and myths to portray an ambivalence about being both seduced and outraged by the onslaught of modernism. His style is reminiscent of a mixture of naivism and late-19th century symbolism. His private life became public in a way that nearly took over entirely, as if the “role” or “mythical figure” of Dardel stood in the way of the artist. It has been too tempting to link his pictures to his biography, basing the interpretation of his works on his life. His works are ambiguous; a seemingly banal and innocuous trait can suddenly swing into its diametrical opposite. Seriousness and irony co-exist, and many of his works have several parallel storylines. This parallelism also entails that the narratives in his works have multiple entry and exit points. This ambiguity is present equally in his person and his works. His is a dual nature that attracts and is attracted by both men and women.

“The often wild combination of laughter and tears, seriousness and madness that characterises Dardel’s art has a kinship with the dadaist and surrealist art circles in which Dardel moved, especially in Paris. In his works, he presents his private life and modern, independent individuals in a role play about identity and how it can be created and recreated. Like he created a persona for himself – the democratic dandy,” says John Peter Nilsson, curator.

A richly illustrated catalogue with new essays by John Peter Nilsson, Erik Näslund and Annika Öhrner will be published in conjunction with the exhibition Nils Dardel and the Modern Age. Öhrner highlights Nils Dardel’s seminal influence on the Moderna Museet Collection. Several pieces by artists such as Picasso and Léger that are now regarded as Moderna Museet’s key works come from Rolf de Maré’s collection. A collection that Nils Dardel began to develop in 1912, engaging his network of friends and his passion for interesting contexts.

The exhibition features some 100 works – including several iconic works such as The Dying Dandy (1918), Visit to an Eccentric Lady (1921), Crime of Passion (1921), and The Waterfall (1921) – mostly paintings and drawings, but also Nils Dardel’s palette, programmes from the Ballets suédois and a stage model and the score for the ballet The Madhouse.

After Stockholm the exhibition will be shown at Moderna Museet Malmö from February 2015, before touring to Turku Art Museum in autumn 2015.

The exhibition is supported by E.ON.

Invitation to the press preview on 27 May at 10 am – 12 pm. Introduction by the director of Moderna Museet, Daniel Birnbaum, co-director Ann-Sofi Noring, and John Peter Nilsson, curator.