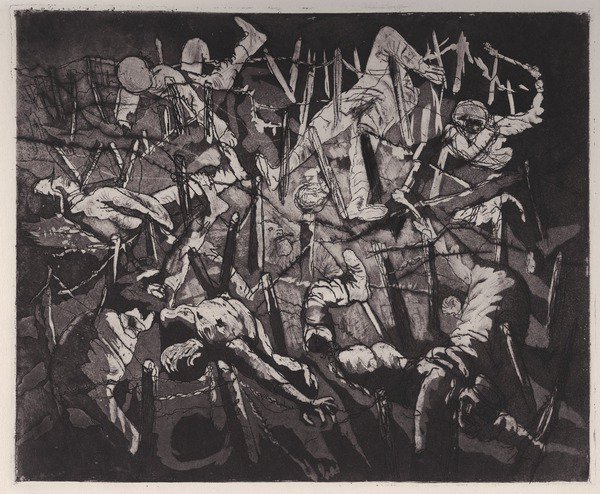 ‘I had to experience how it would be if someone beside me suddenly fell over and died from a direct hit. I needed to experience it directly. I wanted to. So I’m not a pacifist at all – or am I?’ German artist Otto Dix’s ambiguous attitude to the First World War is typical. Nothing about the ‘Great War’ was simple and straightforward. Every country had its own particular reasons for going to war (or, like the Netherlands, for remaining neutral). And each artist who recorded the experience of war took a different attitude to it. The ‘Picturing the Great War’ presentation in the Berlage Room at the Gemeentemuseum Den Haag uses work by German and Dutch artists like Otto Dix, Ludwig Meidner, Käthe Kollwitz, Jan Toorop, Leo Gestel, Jan Sluijters, Piet van de Hem and Willy Sluiter to reveal something of this diversity.

The assassination of Archduke Franz Ferdinand of Austria in 1914 is almost invariably identified as the key event that triggered the First World War. Assuming that Serbia was involved in the murder of the heir to the Austrian-Hungarian throne, the Austrians invaded and plundered the country. This attack produced a domino effect and soon all the major powers were at war. Within months, Otto Dix volunteered for the German army. He was 23 and wanted ‘to fight for a new and better world’. However, service as a machine-gunner on the Western Front soon opened his eyes to the less glorious realities of trench warfare. His 1924 cycle of prints entitled Der Krieg (‘The War’) gives such an intense and detailed picture of the horrors of war that it can easily be regarded as a powerful anti-war statement. But Dix’s own attitude was always equivocal. While he admitted to suffering from nightmares, he also said that he would not have wanted to miss the experience of war. It had shaped him both as an individual and as an artist.

German publisher Paul Cassirer was initially equally upbeat. In August 1914 he began issuing Kriegszeit (‘Time of war’), a weekly four-page ‘newspaper’ in which artists like Max Liebermann and Ernst Barlach responded to the events of the war. At first, their images were heroic but by March 1916, when the last issue appeared, the tone was completely different; nobody believed in the war any more. Cassirer replaced Kriegszeit by a pacifist magazine entitled Der Bildermann (‘The picture man’). Two years before the outbreak of war, German Expressionist painter Ludwig Meidner had been in a completely different mood when he produced his Apocalyptic Landscape – a painting that literally anticipates the course of events, predicting the devastation wreaked by the war with frightening accuracy. German printmaker Käthe Kollwitz was also quick to adopt the slogan ‘WAR – NEVER AGAIN’. She saw poverty and political turmoil all around her and in 1914 her son – a fusilier in the German army – was killed in an attack on the Flemish town of Diksmuide. Kollwitz responded by producing posters in support of humanitarian organisations and by drawing attention to the consequences of war in arresting drawings. The image of war that Kollwitz projects is that of the innocent civilian suffering the consequences of political decisions.

Although the Netherlands remained neutral throughout the First World War, it was not entirely unaffected. When the first Belgian fort fell into the hands of German occupying forces on 30 September 1914, the event prompted a mass exodus of Belgian refugees through Zeeland into the Netherlands. A number of artists – including Jan Toorop and Leo Gestel – were struck by the humanitarian disaster and produced works depicting it. Living in Domburg (Zeeland), Toorop witnessed it at first hand. Gestel was not living there but chose deliberately to go to the border area and produced over a hundred prints and drawings of the refugees. Other artists in the neutral Netherlands could take a more detached view of the war. Starting early in 1915, Jan Sluijters, Piet van de Hem and Willy Sluiter produced cartoons about events in the war for a periodical called De Nieuwe Amsterdammer (a forerunner of today’s Groene Amsterdammer). They criticized the conduct of the war by the major powers but did not spare the neutral Netherlands either.

This year’s theme of Light inspired 1745 artists to submit 3000 works for the closely fought qualifying rounds of SummerExpo 2014. The independent jury has chosen 248 of the anonymised artworks to be exhibited at the Gemeentemuseum Den Haag. The varied selection of photographs, films, models, drawings, paintings and installations will create a visual spectacle of the first order. Following the great success of last year’s venture, the public will once again have the opportunity to buy the exhibits. SummerExpo will be open to the public from 28 May to 31 August.

The Gemeentemuseum Den Haag and ArtWorlds are proud to present the fourth edition of SummerExpo, the Netherlands’ biggest open-entry art exhibition. The show will provide a wonderful overview of the current state of play in Dutch art. The selected entries will compete for a number of prizes: the Visitors’ Prize, Museum Prize, Multiples Prize and a special prize for the work making the most inventive use of light and/or energy. The prize-winners will be announced at the end of August.
Qualifying rounds

The jury met in the Eusebiuskerk in Arnhem, Loods 6 in Amsterdam and the Opifexkerk in Leidschendam to judge the over 3000 entries. The light in all the venues was magical and the buildings provided magnificent settings for these exciting events. The jury was composed of curators, gallery holders, cultural entrepreneurs, art historians and artists. The works were presented anonymously and judged purely on their artistic strengths. AVRO arts programme Kunstuur filmed the qualifying rounds and the resulting documentaries will be broadcast on Dutch TV channel Nederland 2 on 11, 18 and 25 May.
Exhibits for sale

As at the venerable Royal Academy Summer Exhibition in London, all the exhibits on show at SummerExpo will be for sale. The organizers hope that this will encourage more people to buy art and give artists a way of marketing their work to a wider public. Thirty per cent of the sale price will go to ArtWorlds. The exhibition catalogue (price € 9.90) will contain photographs and descriptions of all the exhibits, together with details of the prizes. It will be on sale in the museum shop from 29 May and the works selected for inclusion in the exhibition can also be viewed in an online gallery at www.zomerexpo.nl.

SummerExpo 2014 is sponsored by the Cultural Participation Fund, VSB Fund, Fund 1818 and the BankGiro Lottery.

For further information, please contact Brigitte Timmermans at the Press Office: btimmermans@gemeentemuseum.nl or + 31 (0)70 3381 137. Picture material can be downloaded from the press page of the museum website.