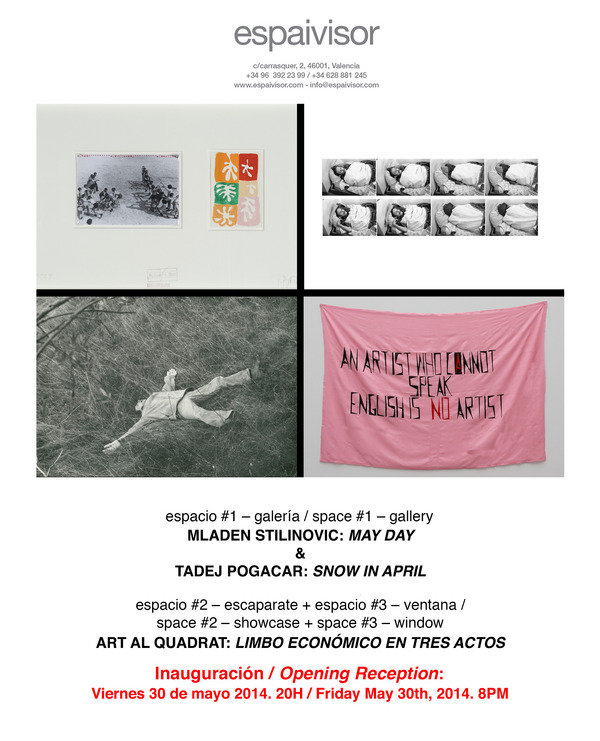 The Value of Language
In the small text “Footwriting” from 1984 Stilinović explained the starting point of his work as the question of how one expresses something personal in a language whose words or images are “not mine”, a language that is “occupied”, whose elements are already determined by meaning. From this perspective, language – words as well as pictures – is altogether no personal instrument of the individual, but rather of a society with its politics and ideology. Roland Barthes has shown how conditions are affirmed through the use of languages and seemingly innocent symbolic systems. Specifically because power is exercised through it, Barthes calls language violent. Violent “politically contaminated” language is one of the subjects of Stilinović’s work. He examines its force and effect in his series of work on sayings and everyday phrases. For example, he writes adages and platitudes on plates, which he previously painted with geometric patterns reminiscent of Constructivism. After a visit to New York in the nineties, he created an ensemble of five works: these were small format paintings on wood panels, the surfaces of which were divided into irregular rectangular fields and painted with different colors. A one-dollar bill and reproductions taken from magazines are collaged respectively on this colorful, geometric grid. With stencils Stilinović added words like “pretty”, “charming”, “sweet” or “nice”, thus parodying a “jargon” of the New York art world, which makes the specific everyday usage of language into categories of art education: “pretty”, “sweet” or “charming” like modern interior decorating on the page of a magazine or children playing ball in one of the pictures.
Stilinović shows how added value is created with language. Not the forms themselves, but the meanings associated with them – the adjectives – determine the value of an (art) object. In another series Stilinović writes the frequently used vocabulary of art jargon on bank notes: “interesting”, “subtle”, “cultured”, “refined”, “unique”.

Art and Society
Yet there is also another theme suggested in the colorful geometric patterns: the complex legacy of geometric art. Geometric art is regarded as the epitome of engaged art, which sought on the one hand to change the entire world of life with a new aesthetic and on the other hand was integrated by a (corporative) aesthetic of the “universal harmony” (Herbert Read) of the bourgeois capitalist society, which it once wanted to change. Whereas geometry once embodied the drive for an emancipated society whose ideals were collectivity and commitment, the abstraction that became established in the postwar period stood for values like individualism and freedom, conveying the interests of capital and not those of the working class.

But in Eastern Europe – in the context of adapting artistic creation to the doctrine of Socialist Realism – the geometric form language became a field of individual and romantic internationalization, a more private protest against the totalitarianism of the socialist cultural policy. Stilinović integrated the ambivalence inherent to geometric abstraction (and the avant garde in general) in his works with his use of color and form. Just as he is interested in the details of everyday life, he is also interested in the function(s) of art in society and its connection with claims to power. Yet his position is different from that of the avant-garde of the early 20th century. Sceptical about the potential of art to contribute to social change, Stilinović investigates its relationship to power. The focus of his attention is on the “afterlife” of utopias. When is a utopia of liberation turned into a gesture of authority? What is the continued impact of utopias, whose claims have been buried, but whose aesthetic forms and architectural productions are still accepted and applied?

One artist that Stilinović frequently refers to is Kazimir Malevich. It is widely known that the Suprematism invented by Malevich was not solely an artistic style, but a world view – an aesthetic, but also a social program. Malevich understood his Suprematist pictures as descriptions of an ideal future world “liberated” from material and political interests. Another reference to Malevich is found in Stilinović’s “white works”. In Malevich’s Suprematist system white stands for nothingness, for emptiness; the white area designated an undetermined field, an infinity, but in a positive sense as a liberation. In 1986 Stilinović painted an old-fashioned alarm clock completely white, except for the number zero (the hour 10), which is visible through a small rectangle left open. The white clock undermines the thinking upheld in both capitalism and socialism that work is to be regarded as the most important condition legitimizing existence. The work additionally links this principle with the question of the economicization and rationalization of life by means of time. In contrast to this, in the text The Praise of Laziness, which also refers to Malevich, Stilinović proposes a concept of laziness as the precondition for making art at all. He criticizes the model of the “western” artist, who is compelled – as Stilinović sees it or at least polemically asserts – to establish himself “professionally” and routinely produces objects for the art business. The activity of the contemporary unofficial artist in socialist countries – who is not commissioned by the state and involved in the ideological education of the citizens – is regarded as being lazy or not working. This theme was dealt with in a series of black and white photographs created in 1978, Artist at Work, showing the artist in bed. In the photos, Stilinović’s eyes are sometimes closed, as if he were asleep, then they are open again, as though he were thinking about something. In some photos he is turned towards the viewer, in some he has his back turned. The various positions subtly reflect the ambiguous position of artistic work and its status in (socialist) society. Yet the tone of the work is not tragic; on the contrary, with a certain irony and self-assured nonchalance the photos also transport something of the comfortableness and benefits of being an artist. If the social consensus is that artists are lazy, then you can either try hard to prove the opposite, or – like Stilinović – assert this idea specifically as a quality with an incomparable potential for private life and artistic practice.

TADEJ POGAČAR: SNOW IN APRIL
MIŠKO ŠUVAKOVIĆ: DAILY LIFE AS PUBLIC PRACTICE IN THE FIELD OF MULTIPLICITY. THE PRODUCTIONS AND INTERVENTIONS OF TADEJ POGAČAR AT THE END OF THE FIRST DECADE OF THE NEW MILLENNIUM.

Tadej Pogačar is an outstanding example of a contemporary artist who appears and expresses himself in the antagonisms and contradictions of shaping life experiences in the here-and-now or the there-and-then on our global map. He is on the move. He changes topologies. Pogačar is an example of a global artist, because he manages to work with singular samples of thoroughly differing segments of everyday life in various geopolitical, geo-cultural and geo-behavioral spatial situations, worldwide.

Pogačar’s “artistic activity” is simultaneously based on the programming and execution of ambiguous effects in the fields of institutions or forms of daily living by means of realization of artistic and activist intentions. His intentions, however, are not a simple orientation of an artist towards the act of creation of a work of art as a completed art piece. Pogačar also engages in curating and para-curating activities. He intervenes with models of inhabiting and usurping institutions within the art world (museums, galleries, a flat of a fine art critic), associations and culture (urban quarters, syndicates of sex workers, associations of the homeless). Pogačar works with a activist-like demonstrative confrontation with the mechanisms of daily existence in the urban dynamism of singular life in the global net of contemporaneity. Forms of everyday life are his “post- medium” of intervention activity. However, he also curates a gallery and publishes artist’s books and theoretical works on contemporary artistic practices. He classifies and exhibits indexes of “affects” and “auras” within contemporaneity. His work in all these different instances is subject to permanent re-articulations not connected with a “finished artwork”, rather with affective and auric intensities of boundaries between intensity and non-intensity in the everyday existence of an entirely ordinary human life. He is attracted to the “trivial situation”, although he does not search for the phenomenology of obscene triviality, rather the politics of obscenity in normal and entirely trivial everyday lives of ordinary people worldwide.

Pogačar’s work is, therefore, most frequently accessible in the duality of a random live interactive event, and (2) a documentary mediation of such instigated, performed and completed events. The event itself, and thedocumentation, are the operational tools with which Pogačar, as an artist and a curator, that is, an activist, implements an informational intervention in the field of social activity. His work is, in its essence, a type of activist existentialism, in other words, an analogy to interventive cognitive mappings that originated and developed in Situationism. He, most definitely, does not perform a remake of 1960s Situationism- Pogačar is absolutely an artists of a different era, the epoch of globalization. Tadej Pogačar works within the “envelopes” and/or “frames” of situations that have global topologies.

It is of utmost importance, for Pogačar’s work, to point out the significance of “relations”, that is, the establishing of relations within heterogenous planetary daily lives. This is why his procedures can be read through the theorization of “relational aesthetics” and models of “postproduction” of Nicholas Bourriaud. His projects are about global cultures in which the relationship between art and social practices is open and relative to changes in potential relations of the singular and the universal. In

Pogačar’s work, traces or models of cultural relations are presented as representatives of everyday forms of life. (...) We are dealing with intensities instigated through action in a particular context, and effects of different intensities in the shaping and reshaping of life in institutions, human habitats, dumping grounds, central spaces of public life, and marginal situations of being. Pogačar works - he shows and exhibits - these complex potentialities of the public and private, in other words, the marginal and the central in framing “being” within contemporary daily life. It is as if he, in this way, finds alternatives within contemporary “empires” of politics, economy, bio-technologies- as if he searches for the potentialities of the field of otherness which is the source of critical activity. His research indexes and projects potentiality of real democracy for “an individual form of life!” amidst other forms of life. He is focused on the importance of singular existence in the multitudes that change in the fight for survival in the middle of an ordinary and common daily life, here, all around us, and amongst us. The individuality of the democratic act - direct democracy - demonstrates that he is an artist of the politics of singularity.